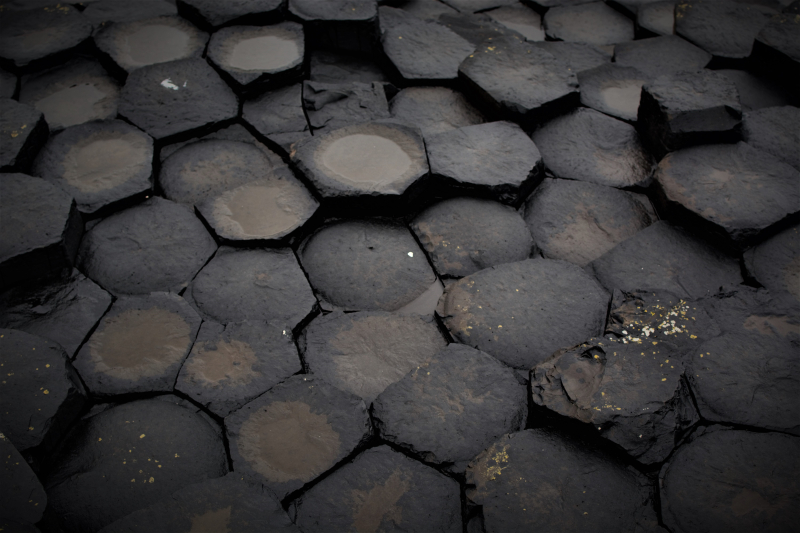 Well good morning there! Today I’m writing about what I did last weekend (as per usual). And what I did… was go to Ireland! Again! Except this was a little different than the last trip as we went to Northern island, specifically Belfast and the surrounding area. Our main reason for doing this was to go and visit the Giant’s Causeway (or, at least my main reason), an exceedingly unique geological feature North of Belfast, where cooling lava bends cracked, forming what is now a series of beautiful angular columns, most of which are heptagonal or hexagonal in shape. To do this though, we ended up on a bus tour (as this was significantly easier than renting a car for the weekend) and made a few other stops as well. These included the Carrick-a-Rede rope bridge, a traditionally dodgy bridge built for salmon fishing, that, since restrictions on salmon fishing had been implemented had been taken over by the national trust and made into a (somewhat disappointing) short bridge to a small island. The surrounding area was beautiful though. We also stopped at a couple of castles and a few other locations, but honestly most of them weren’t all too noteworthy, so enjoy this picture of a sheep that was at one of the stops.

The Giant’s causeway though, was sublime. It was everything I could’ve asked for, although perhaps a bit colder than I’d hoped. One thing that the pictures don’t do justice to is how big the columns are. Each one was about a foot or so in width – prior to this I’d thought they were maybe inches wide instead. We got a couple hours to climb around on this geological playground. We had to make sure to take many pictures, as this was the true reason for our visit to Northern Ireland, and I did a bit of bubble tea brand ambassador work too (although I couldn’t find bubble tea the night we got in so the flask was filled with water).

And the final highlight of the Giant’s Causeway? Surprisingly, it was the sandwich we got at the café. It was shockingly simple, Irish bread, bangers, back bacon, and a fried egg. And it was one of the most delicious sandwiches I’ve ever had. For some reason the extreme loading of meat was simply sublime, and I don’t really know why but it probably makes the top ten sandwiches I’ve had in my life.

Go to the Giant’s Causeway! (and order the sandwich), –Chandrew