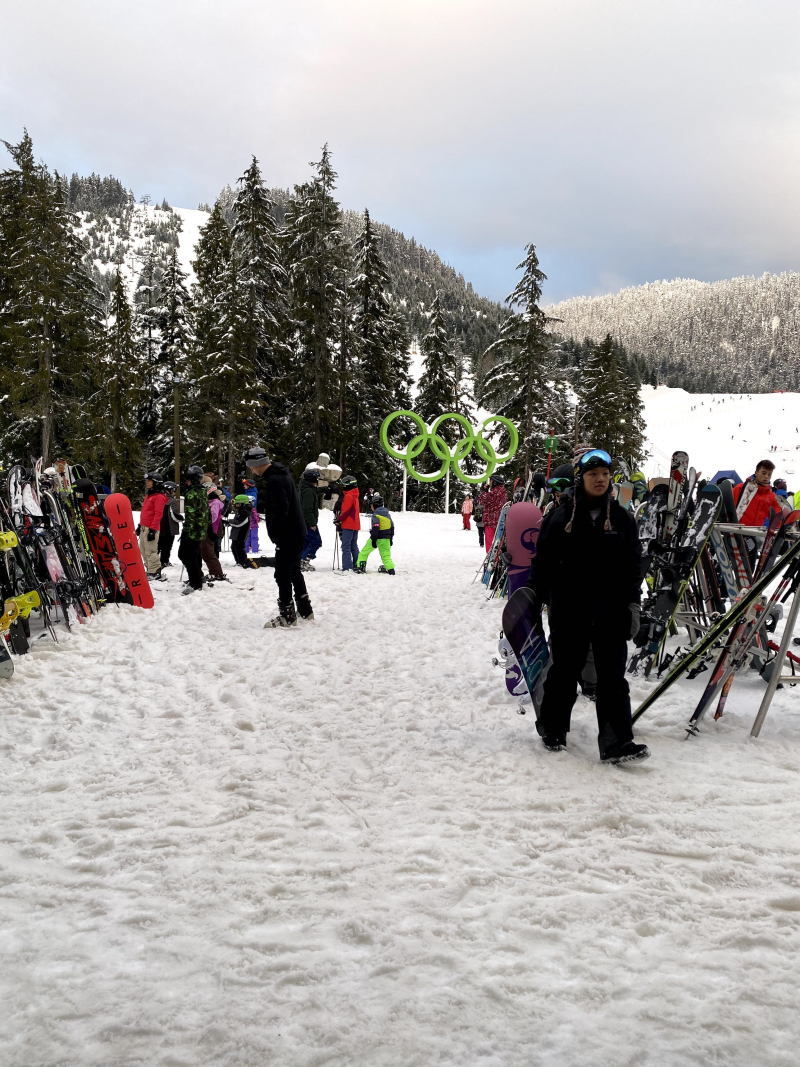 Snowboarding with my friend Cecilia is an annual occasion when I go home for the holidays. Cecilia and I actually learned snowboarding a few years ago. We signed up for these intro lessons, but arrived at the slopes early and thought that we would try a run before the lesson to see where we at. We were slightly confused, so took the lift to a green run instead of the bunny hills. We got down that run 80% on our butt and 20% on our feet, but it was a great start. By the end of that day’s lesson, we were getting down that same run 80% on our feet. Of course, now we are much better.

We chose to go during peak season. Even though we had purchased lift tickets and rentals well ahead, we had to wait about an 1hr in line to pick everything up. There were just that many people that day. I was almost concerned that they would run out of equipment. Anyways, if you visit Cyprus, I would highly recommend purchasing online ahead of time since there is at least a 10% discount and it saves you so much hassle on the day of. Also, for adults, rentals do not include a helmet, but if you value your head and its health, you should probably rent one for an additional 10 dollars. Getting back on the slopes felt quite strange. I feel like I never use my quads that much in real life, after a few runs, my legs felt like jelly. Also, since there were a lot of people, it was difficult trying to go fast and avoid everyone. It’s terrifying going down a run with inexperienced snowboarders and skiers since you don’t know if they will suddenly slide to a stop or will lose control and come flying at you. In addition, it was sunny that day, so the conditions were rather icy. Another hinderance were the clouds that eventually became fog. Not being able to see far ahead on a crowded slope was quite a challenge.

I think I was able to get about 6 runs in before we had to take the bus back home. I also don’t think I could go for any longer since I had taken a few falls by that point and my entire lower body was sore. Although the conditions were not ideal, it felt good to be back. I wished I could go a couple more times, but I had other plans for the remainder of my break. Perhaps I will visit Big Bear or Mammoth in the new year, or will go more next winter.

Living in the Virtual School Year

This past year was so different than most of us could have ever imagined. Living in “the virtual school year” posed a plethora of challenges, but at the same time, it opened the door to new possibilities. As a society, we learned how to better operate in a virtual world, and as individuals, we had time for new endeavors. For myself, this meant taking the leap of faith to move away from home and live with some fellow Techers. While I had already had the experience of moving away from home and coming to live in the Caltech houses, this was quite different. Instead of living in organized student residences with hundreds of other students, a meal plan, and tons of support resources, I was about to go live with just 5 other people (some of which I did not know super well) and we had to find and manage our own housing, food, and necessities.

My favorite part about Caltech is the Houses! The easiest way to describe them is as Hogwarts houses: each has their own personality and group of people and the first thing you do at Caltech is go through a “sorting” process. The people are what makes the Houses at Caltech so great. As a frosh, it’s amazing to be able to come in and immediately have a group of 100+ people to support you. Because the Houses have students from every grade, you make friends with upperclassmen and can ask for help on tons of things like: