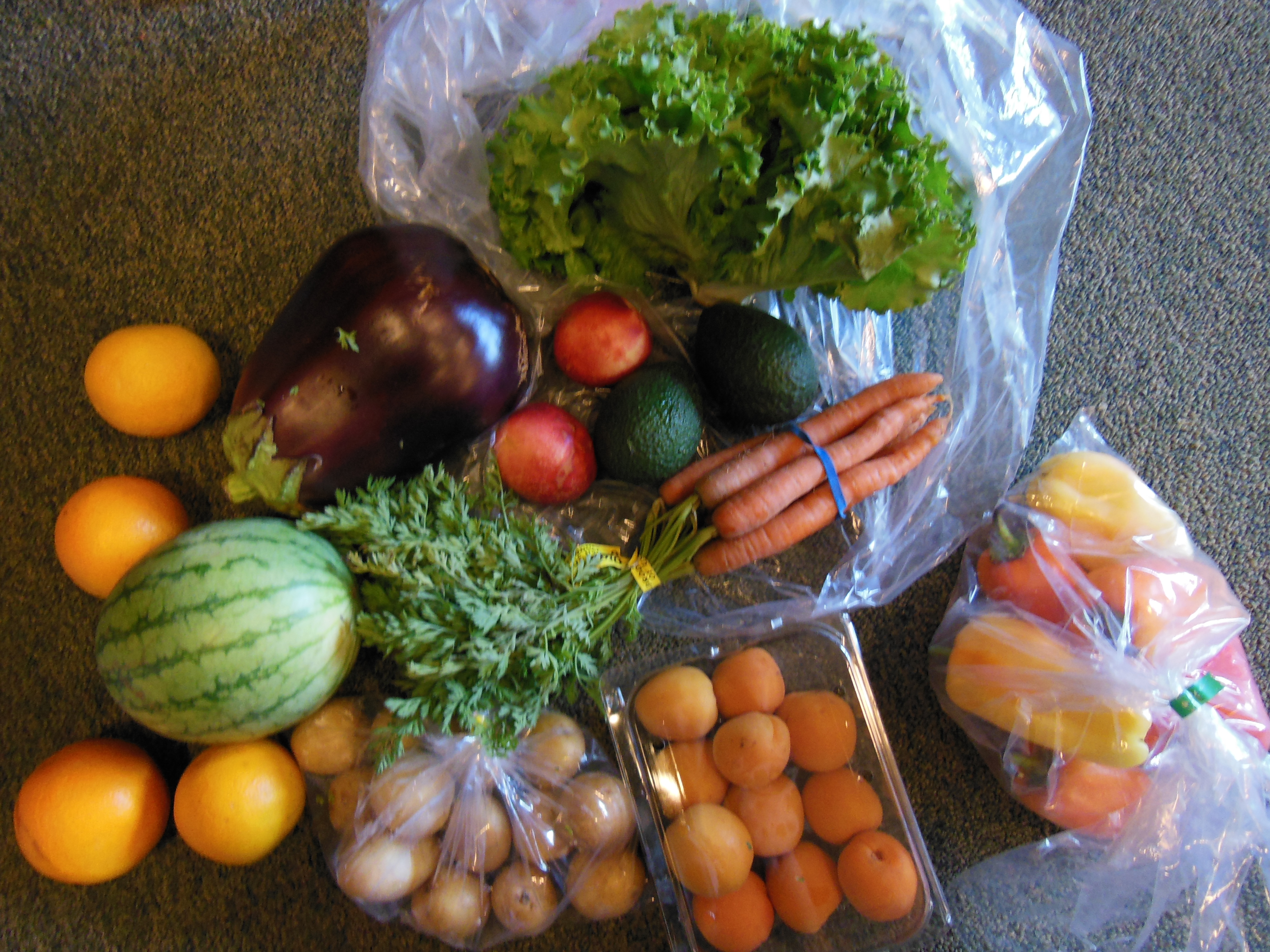 It was quite fun getting our farm boxes every week, but SURF is almost over and people are going home, so Friday will be the last day in a while that we will be getting ourfresh produce delivery. As a memoir, I’m going to dedicate this post to Farm Fresh to You! I’ll spam photos of the farm box we got over the summer, then talk about our experience with the service.

(Note: There’s no photos of the 7/5 box because I was at Anime Expo and I accidentally forgot to take photos of the 7/19 box, but everything else is here. Also note that some of these bundles may have more/less food than others because we sometimes swapped for a bigger/smaller box due to having other food plans.)

And now, time for information dump! Food QuantityYou can sort of estimate how large the food items are from the yardstick in each photo, but, for anyone who cares, a regular-sized box has enough food so 3 people (my two roommates and I) can eat dinner every day of the week with some leftovers.

However, do note that our dinners are not purely produce–usually we have some rice or pasta if we’re stir-frying the vegetables, and we do go out and buy random food (such as cheese or tofu) every now and then. We also eat eggs pretty constantly for easy protein. Also note that the three of us are not very large or muscular and thus don’t need very many calories to survive. Food QualityFood quality is usually really good. At the very least, they match the quality of what you can pick out at a supermarket–the none of the produce is ever wilted or bruised. Although the fruits sometimes can be smaller than what you can get at non-organic sections of the supermarket, that’s to be expected from a organic family farm. Most of the things are decently/”normal” sized. (I say that the quality is “usually” and not “always” because we got a strange unripe canteloupe once. It was strange because it smelled ripe, but when we opened it, it wasn’t ripe yet…)

Taste wise, the food is amazing. I once thought I dislike tomatoes, but it turned out that I just dislike supermarket tomatoes–the tomatoes from the farm box are amazing. They’re not overly sharp and strongly tomatoey or tasteless and mealy like the supermarket ones tend to be–instead, they have a sweet and complex umami flavor. Their oranges are also really, really good, as are their pluots. Final verdict is 11/10, would definitely do again.

StorageMost of the food stores really well–there’s some week-old romaine lettuce sitting in our fridge and it’s still looking fine. The fruits vary in ripeness and keep for various times–the grapes and stone fruits (fleshy fruit with a large pit type of seed inside such as plums) last forever in the fridge, although we usually eat everything by the end of the week so it doesn’t really matter anyway. The only thing of concern was the tomatoes, which are so ripe that we had trouble handling them at first, since they started growing mold a lot faster than expected.

VarietyBecause someone was worrying that all they’re going to get in their box in the winter would be potatoes, here’s a nice chart of what fruits and vegetables can be produced each season. The mild Californian winter means that a lot of different vegetables can thrive despite the season. In fact, summer’s probably the worst season for leafy greens, which wilt under the sun’s intense heat. The farm box service also tries to put a variety of edibles in the box, so we’ve constantly been getting leafy greens (in the form of assorted lettuce) even though they’re not really in season.

Sometimes the farms run out of a certain produce sooner than expected. In this case, the farm doesn’t just give you a smaller box – they will replace whatever produce they ran out with another produce of approximately the equal size and amount. For example, we’re supposed to get some tomatoes this week, but the farm ran out and we got avocados instead. There was also once when they ran out of apples, so we got 3 oranges instead of 3 apples.

If the farm box for the week is planned to have a food on your exclusion list, the farmers will swap out your excluded item for another thing of equal value like how they replace foods that run out early. This way, you don’t have to worry about getting produce you’re allergic to.

Price**Roommate N did some calculations and estimated that our farm box produce is approximately 1.35 times more expensive than non-organic store-bought produce, which is entirely reasonable given that 1) the produce is delivered right to our doorsteps, 2) it’s organic, and 3) it’s from local, small farms that practice sustainable agriculture.

At $31.5 per regular-sized box, Roommate N, Roommate S, and I are able to have fresh produce for dinner every day without ever needing to buy more produce. That’s $1.50 per person per meal. Obviously, you have to account for the cost of protein, fat, carbohyrdates, and spices, but rice and oil is cheap in bulk and spices don’t get used up that fast. The only thing that significantly adds to the price of the food would be the protein source, but even with that in mind, our meals generally cost around $3 per person. I think this is pretty reasonable, especially since eating outside will usually cost you a lot more.

(Of course, you could dirt cheap with the “rice and lentils and frozen vegetables only” route some have decided to go down…) All in all, I’m quite satisfied with their service. It’s also pretty nice because there’s no cancellation fee or other obnoxious things, so you’re not obligated to keep on buying boxes from them. I only have to click a few buttons to pause the delivery for the next few weeks because everybody’s going back home.

Obligatory link to their website again. Not sure how many people registered for their service with the name “Annie Lee”, so note that my account number is 508080 in case they ever ask for it

Also, I got an email from them saying that I’m invited to go on a free farm tour! I’ll get to see the farm and meet the people that grow the food I’m eating! Sadly, the farm was too far away and hard to get to with only public transportation + walking… I’ll just satisfy myself with my green onion farm instead…