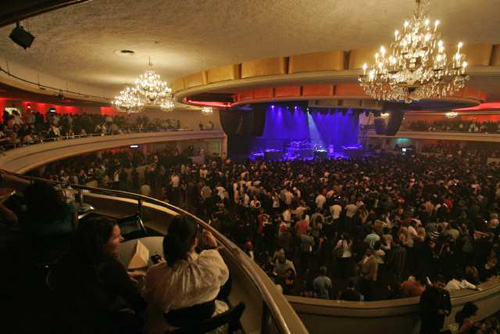 Like I said in my last post, I’ve made a point of trying to get out and about more in the greater LA area. Over the summer, I went cliff diving in Angeles National Forest - taking advantage of the awesome natural scenery that’s nearby. On the other hand, there’s something else that’s pretty noteworthy nearby - the gigantic metropolis that is LA. With it comes everything that you might expect with a big city - sports, clubs, and in this case, concerts.

Now, I’m a big fan of electronic music of all subgenres. I’m not going to take the time here to pontificate on the distinctions between Nu-Jazz, Abstract Hip-Hop, and Trip Hop, or discuss the finer subtleties of Forest Psytrance (it’s big in Finland), but the point is there’s a huge range of it. Dubstep is the big popular one right now - a few years ago it was Trance, and back in the 80s when they were busy inventing electronic music it was all about House.

One problem with electronic music is that it’s still in the process of getting big here in the US. It’s really awesome that it has gotten to the point where even non-electronic festivals have headliners playing EDM (Electronic Dance Music). For example, Outside Lands this year had Skrillex, Justice, and Wolfgang Gartner headlining this year, even though it’s a festival appealing to all genres (also there: Die Antwoord, Dirty Dozen Brass Band, Metallica, and Stevie Wonder. It was eclectic, and if I ever get around to it, I’ll write a blog post about being in San Francisco for it).

So while EDM is getting more and more popular here, it’s only certain subgenres that are, and most of the other stuff is still produced and performed heavily in Europe - and, in the case of Psytrance (one of my favorite subgenres), Israel. So being in LA is really awesome, because when foreign groups come to play in the US, they tend to only make a couple stops in the big metropolitan areas - LA, New York, and occasionally Chicago or San Francisco along with a couple other places. Luckily for me, a British group named Shpongle, which so happens to be one of my favorites, was on a world tour and one of their stops was here in LA. Needless to say, I had to go.

I grabbed a couple friends, convinced them to buy tickets, and we all hopped in my car on a Saturday night to head in to Hollywood. The concert was at an awesome venue - a dance floor sized for 4000 people, with a lounge outside and balconies for people like us who wanted a chance to sit down for a minute. It’s also right on Hollywood Boulevard - so we could have walked around afterwards and seen the walk of stars (or whatever it’s called) and some of the really neat places - like the venue where they hold the Oscars every year. All of this was a 25 minute drive away, with free parking.

This isn’t a concert review, so I’ll just say it was perhaps the most fantastic musical performance I’ve seen in my life - rivaled only by a performance of Beethoven’s Ninth I saw a few years ago (I love Beethoven’s Ninth, and my music tastes are eclectic enough that I can compare classical music to psychedelic EDM).

Unfortunately, my phone’s camera decided to die on me that night, but here’s a picture of the venue:

And, for those of you who want to see what this concert looked like and what exactly this music is that I’m so in love with, here’s a youtube link to one of Shpongle’s earlier stops on the tour.