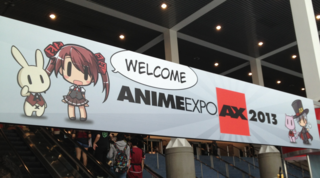 From July 4th-7th, there was aJapanese pop culture convention held at the Los Angeles Convention Center called Anime Expo or AX for short. It was the second anime convention that I’ve been to; the first one being Fanime in San Jose in 2011. AX was super exciting, and I’ve never seen so many people stuffed into one area before.I definitely enjoyed seeing everything going on at the event! AX is the biggest anime convention held in the United States every year, and it hosts high-profile artists, actors, producers, and other individuals from the animation industry. There are a variety of activities for attendees to take part in, from sitting in on guest panels to competing in costume or videogame contests. The guest panels are really cool because you can hear what the guests were thinking, the troubles they encountered, and their approach towards tackling those problems while they were producing a show or voice-acting a particular character.

There are also live concerts, open karaoke, and a rave.Many people spend a lot of money at the convention by buying merchandise made by companies or amateur/semi-professional artists.

A lot of money is flowing through during this event, but it’s not all just about profit-making! AX holds an auction to donate to charitable causes. In past years, AX has donated the money from the auction to the Japanese Red Cross,Children’s Hospital of Orange County, and City of Hope.

Many people go in costume (cosplay) when attending AX. Hardcore individuals make their own costumes by hand, while others buy them premade. You can tell what has been the most popular recent show by the number of people with costumes from that show. This year, the most popular show was Attack on Titans without a doubt. You couldn’t go more than 5 minutes without seeing someone from that show. Attack on Titans was actually previously mentioned by another Caltech blogger here: https://caltech.typepad.com/caltech_as_it_happens/2013/05/draft-matryoshka-brain.html.

There were a lot of really great costumes, but one of my favorites was from stealth video game called Assassin’s Creed. The left image is the picture I took at AX, and the right is an image from the the game’s promotional artwork.

Practically the same, right? (In fact, it’s so good that I’m wondering if the costume was bought?) Over the past year, there was an Asian craze for alpaca stuffed animals and accessories. There were several vendors at AX selling alpacas, so my friends got me to bring back a few new buddies. :)

*One alpaca for each friend! I own the pink one in the middle.* Initially, I thought these were llamas, so I named mine “Duck.” This was in reference to the viral Llama Song video on Youtube. I’ve embedded the video below.The name stuck even after I figured out they were actually alpacas.

I can’t wait to go to AX again next year!