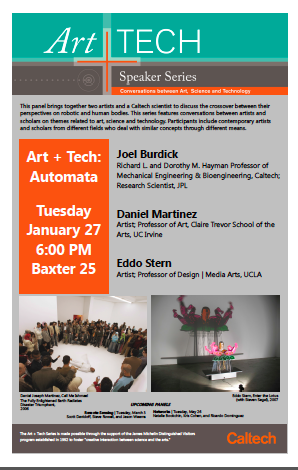 I’m currently enrolled in E/H/Art 89, New Media Arts. The class is a mix of an art history, art discussion, and project-based class, where each week we discuss a new topic from the history of Dadaism and Marcel DuChamp’s “Ready Made” art, to cybernetics and glitch art, to Survival Research Laboratories’ destructive robots. The class’ lecturer, Hilary Mushkin, organized a panel last week for two artists and a Caltech professor to discuss their work in the creation of automata and the blend between art and technology in this space.

The Caltech professor in question was Joel Burdick, an engineer who works both on improving robotic technology as a part of JPL’s DARPA Robotics Challenge team, and on improving human mobility by creating electronic implants to allow paralyzed patients to regain lower body function. He’s a total renaissance man, and he is a fantastic speaker. His lab has recently had amazing success in human trials of their lower-spine computers, which stimulate a part of the lower nervous system that does not communicate with the brain, in such a way that they have been able to help people paralyzed from the waist down to stand, walk, and regain lower muscle functions.

The two artists present worked with technology to varying degrees. The first to present was Eddo Stern, a professor of Design and Media Arts at UCLA. Stern presented videos of a few of his pieces, including a few iterations of Dark Game, a two-person videogame that pits one player, who cannot see anything, but can “feel” where their player is in the virtual world, against another player, who can see. The player who cannot see the screen feels vibrations in their headset when they come into contact with something in the game, and as they move through the game, they darken the screen in those positions so that the other player has a disadvantage, too. The game continues until the screen is all black or all viewable.

Stern also presented video of “Tekken Torture Tournament,” a hack of the street fighting video game Tekken, where hits to your character are translated into electric shocks to your right arm as you play the game. As the tournament progresses, the voltage of the shocks increases.

The second artist present on the panel was Daniel Joseph Martinez, a professor of Art at UC Irvine. Martinez’s automaton, that he showed us at the end of his presentation, was a sculpture that blasted a wall with blood through a gun located within the finger of a human arm. He showed us images from the installation, which was rather disturbing. One could say the same for Stern’s “Tekken Torture Tournament,” I suppose, but I was more interested in Stern’s erasure of the line between avatar and gamer than in the physical harm enacted on TTT’s participants.

The day after the panel, which was open to all of the Caltech community, Stern and Martinez joined our E/H/Art 89 class for pizza and a second panel, where we had the chance to ask them more detailed questions about their work and where they see the meld of technology and art going in the future. The most interesting discussion, I think, was about the difference between people who create art and people who design machines. Neither artist thought that they would draw a line between “creatives” and “techies,” but that there were fundamental differences in the way artists and designers worked. As a creatively-minded engineer, I’d believe that there are differences in the ways I would work if I were purposefully creating art versus if I were purposefully creating something with another function, but I do not believe that there are differences between the way artists and engineers think, by default.

What do you think?