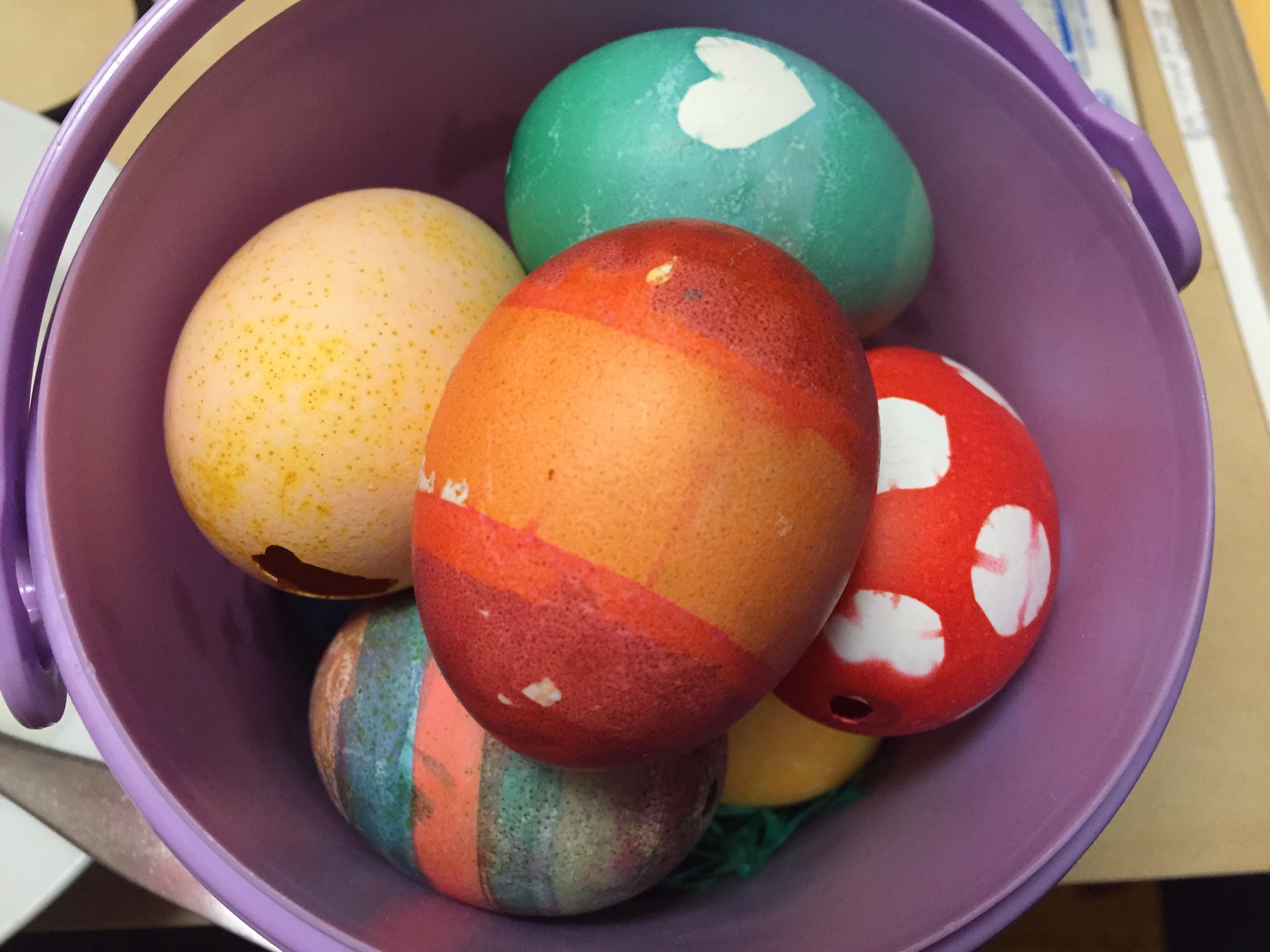 As the UCC of Alley 6 in my House (we call hallways alleys here in the Caltech Houses), it is my job to look out for the mental health of my fellow students, and to occasionally plan mixers to promote intra-alley socializing. By mixers, I mean fun events and not dances. Since Easter Sunday was the day most of the students flew back for the beginning of term, I decided it would be fun to have a secular egg-dyeing party with my alley.

Now, the honest truth is that I have never dyed eggs before in my life.It was one of my childhood dreams–one of those thingsthat you think allother kids get to do but you yourself never have. So step 1 was to type the following query into Google: “How to dye eggs?” My roommate Sandra and I had been planning this particular alley event, in fact, sincea year ago when we decided to become roommates and I found out that I would be a UCC for the coming year. The popular way to dye eggs is to first boil them and then dye them, but Sandra wanted to salvage the shells and suggested we look for a way to extract the edible interior. Well, it turned out that I was in the possession of maybe 30 wooden skewers leftover from marshmallow-roasting on our most recent camping trip, so we were totally set for puncturing the ends of the eggs. Next, I learned that there is such thing as an egg blower specifically invented for the purpose of removing uncooked eggs from their shells without breaking them. Unfortunately, it would have been a poor way of spending our budget. Instead, I ran into the kitchen, grabbed some straws, and spent an hour on a Friday afternoon experimenting with blowing outeggs via mouth-vacuum.

Sandra and I headed off to Vons Pavilions to fetch the rest of the supplies: 3 dozen eggs, food coloring, tape,and white vinegar. Along the way we saw some pretty sweet egg-dyeing kits, including one that involved melting a metallic sheet and re-casting it onto an egg.

Saturday arrived. At 1 pm I gathered my alley (mostly curious frosh; some of the seniors were still asleep) and showed them how to poke and blow through the eggs. It made for a surprisingly great party activity. The newspaper I’d spread on our library tables turned sodden with spilled yoke, while the minimally cracked shell piles grew to a rather impressive height. Sandra and our friend Jerry offered to make everyone tamagoyaki, a Japanese rolled omelet.

I boiled a pot of water and began mixing the dyes. In each cup went some hot water, and white vinegar, and coloring. There were the standard red, blue, green, and yellow. Then came raspberry, teal, sunset orange, jungle green, watermelon red. After the eggshells were washedand lightly autoclaved in the microwave, we dyed them using tape to create stripes and polka dots, crosses and hearts. Jerry decided to melt candle wax onto his egg shell so he could draw faces on his eggs.

Figure 2. Tamagoyaki. (Unfortunately sideways…couldn’t find the rotate button for some reason.) Eggs turned out quite well. And the tamagoyaki was delicious. And people enjoyed blowing out raw eggs more than I expected! This is one alley event idea I’m definitely keeping.