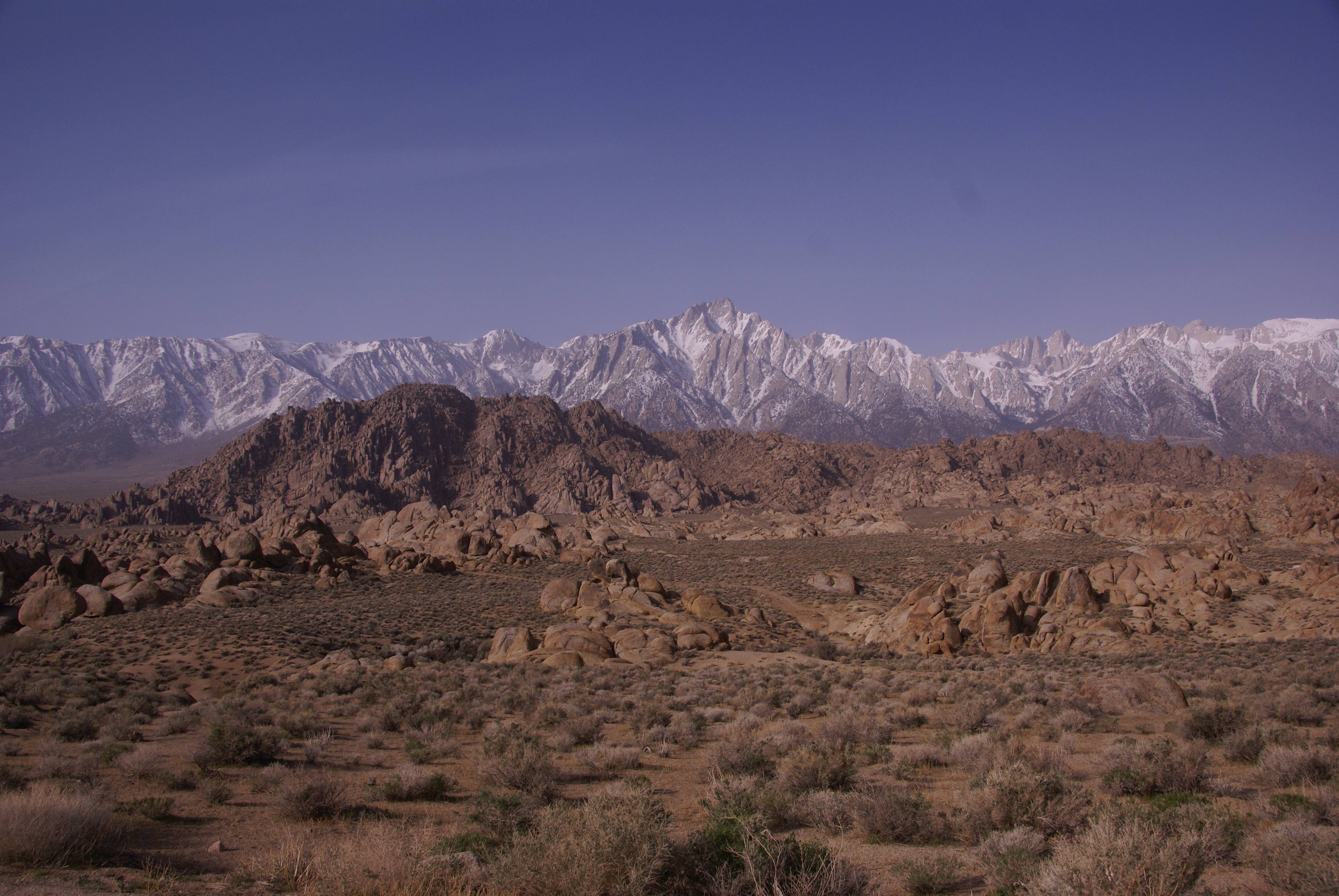 If you haven’t, you should probably read my post about Owens Valley Day 1!

Today, after waking up early this morning (well… early on college time), we headed into the Alabama Hills for our service project with Mike Prathar. Mike is a retired science teacher who has been very active in the local Owens Valley conservation efforts.I’ll write more aboutMike later :)

there are lots of faults in the area, so the Alabama Hills (front) are distinct from the Sierras (behind, more rugged)

The Hills only get about four inches of rain a year (the high mountains on either side of Owens Valley block a lot of the precipitation), so it is definitely a desert climate. Most of the plants are pretty fragile. Some of the (dirt) roads through this area are deemed unnecessary each year, so our morning project was “vertical mulching.” The local ranger and BLM rep,David(bureau of land management – fun fact: there is as much publically owned land in this area, overseen by BLM, as total land in NH, my home state!), showed us what to do.Basically, in order to help ex-roads look more natural, we found dead wood from the shrubs around the road, dug holes in the ground and stuck the pieces of wood up so they looked like shrubs themselves (it’s not as hard as it sounds – actually, it’s pretty fun!). This serves another purpose, too. The vertical mulch gathers seeds around it, and as it decomposes, it adds nutrients to the sandy soil.

After working for about an hour, we got to hike to one of the many natural arches in the area. Here are lots of pictures with captions (I already told I love taking pictures, right?!?!):

learning about the local plants from Mike. In particular: don’t touch this cactus!

there are over 300 arches in the Alabama Hills! Most are smaller than this. They formed because of the dirt in the wind, which rubbed at weak spots in the stone over centuries! Keir - he’s also blogging about this trip!! You should read his blog too to see our different perspectives:)! - Lin, Becca and me!

Becca next to a cactus. We went exploring after finding the arch. There were lots of cool plants I had never seen before, including this one! I’m sorry that the picture resolution isn’t too great in these blogs :(

this beautiful red plant is poisonous

We even saw a rattlesnake, but since I am terrified of those animals (spiders, on the other hand, are great mosquito eaters and don’t bother me at all!)I took a picture and let Bekah, Jonas, and Hunter marvel over the SNAKE! Because it isn’t very clear in the picture - the snake is horizontal, about at the end of the longest shadow.

After mulching most of the ex-road, we stopped for lunch. While we ate, Mike and Dave told us a lot of stuff about the area, the BLM, and the tug of war of local tourism. Much of the local community is dependent on tourism - the more, the better. However, too much tourism also destroys the environmentand decreases future tourism.

Next, we drove to Owens Lake with Jeff, a biologist for the LA DWP (department of water and power). I was in Mike’s car, and that was great – he was able to answer any and all questions we had, and pointed out a lot which we would not have otherwise noticed. For example:

Owens Lake is somewhat misnamed for a historical reason. It used to be a really big lake, until LA decided the valley was a great place to get fresh water. A CA law said that whoever owns the land owns the water on the land and the water flowing through the land. Through more and lesslegal ways (Example 1:checker-board buying – farmers used to share aquaducts, and if a few refused to sell, LA just bought out some of the farmers on that aquaduct so that the others had to pay all of the costs for its maintenance. At some point, they couldn’t afford to do this. Example 2:land agents would lie and say they want to start a cattle farm, when in reality they were LA reps.) LA bought most of the valley in the early 1900s. In 1913, the first LA aquaduct opened.

Farmers in Owens Valley weren’t too happy, and for the first few years, the aqueduct was dynamited a few times.With time, and after LA got 500 security guards into the valley, the attacks stopped. This is labeled the First Water War. If you have time (over the summer… I remember howbusy this time senior year was for me!) you should watch Chinatown. It is a fictionalstory about the First Water War. I’ll write more about the Second Water War tomorrow.

The LA project took water out of the river and into the aqueduct “above” Lone Pine. During the next ten years, as LA grew and grew with its new, cheap water supply, Owens Lake slowly dried up. By Mike’s estimates, the lake was pretty much dried out by 1923.

Then came the dust.

That white underneath the mountains - dust. We could taste the salt in the air. This is after the Dust Project, which I’ll write about in a minute. Before that project, this would have been a picture taken during a not-bad at all day.

The dust was really bad for the local population. Some days, it was hard to breath. In a local town, Keeler, the amount of u10 particles in the air - very dangerous, as we discussed in our ChemE class near the end of second term - was several hundered times the federal limit on a regular basis. Not twice the limit, or three times. Several hundred times!!!

It stayed that way for a while. Keeler shrunk, and now only has a population of about 100. We went to Keeler after visiting the lake.

Early in its history,when the lake was still big, Keeler was a mining town. The mining industry declined, the dust got bad, and the town shrunk a lot.

Local anger about the disappeared lake?

The dust had a huge impact on the people in Owens Valley - but not just them.The amount of particles in the air was big enough to make a difference in the areas where they blew as well. Eventually, people in the valley got mad. After the Clean Air Act was passed, LA was forced to do something about the dust.

As mentioned before, we headed to the lake with a biologist, Jeff,from the LA Department of Water and Power (DWP). Because of the damage done by originally removing water in the section of Owens River between the beginning of the aquefer and the lake, LA was eventually required to put water in the river again. At the end of the river, where the lake began, LA build a water harvesting plant. There, Jeff told us about the dust migation project.Basically, there are three methods currently used to reduce dust:

1) flood the area. The salts dissolve in this water (which is often 30 times more saline than ocean water) and no dust is created in this region.

2) gravel. Put about half a foot of gravel over the dust layer.

I don’t have a picture of this - sorry!

3) create an ecosystem. Add a little water but don’t flood the area; grow plants like salt grass which flourish in this environment.This creates a great environment for birds!

group picture in front of the third type of ecosystem. Ideally, Jeff said, more of the lake will soon look like this

So far, all but 5 of the 40 regions which require dust mitigation aid have been treated. Jeff is optimistic that the remaining five will be done soon. There are some problems, however, in a region of the lake-bed which has a lot of clay. In this area, the gravel sinks into the clay; the water doesn’t help too much, and the plants won’t grow. Problems for usto solve! Any ideas?

We wanted to see the “snow” up close, so:

There was this really awesome cloud-front. Mike explained it to us. In one sentence, it is caused by the winds crossing the two mountains hitting each other.

After visiting Keeler, we headed back to the hostel. After dinner, some of us went to watch Tremors - the movie filmed in the region which Chris told us about the first day - and some of us played a monster round of Apples to Apples. My only adjective was selfish :( It was a super-fun day, and I learned a ton about the area and the local environment!