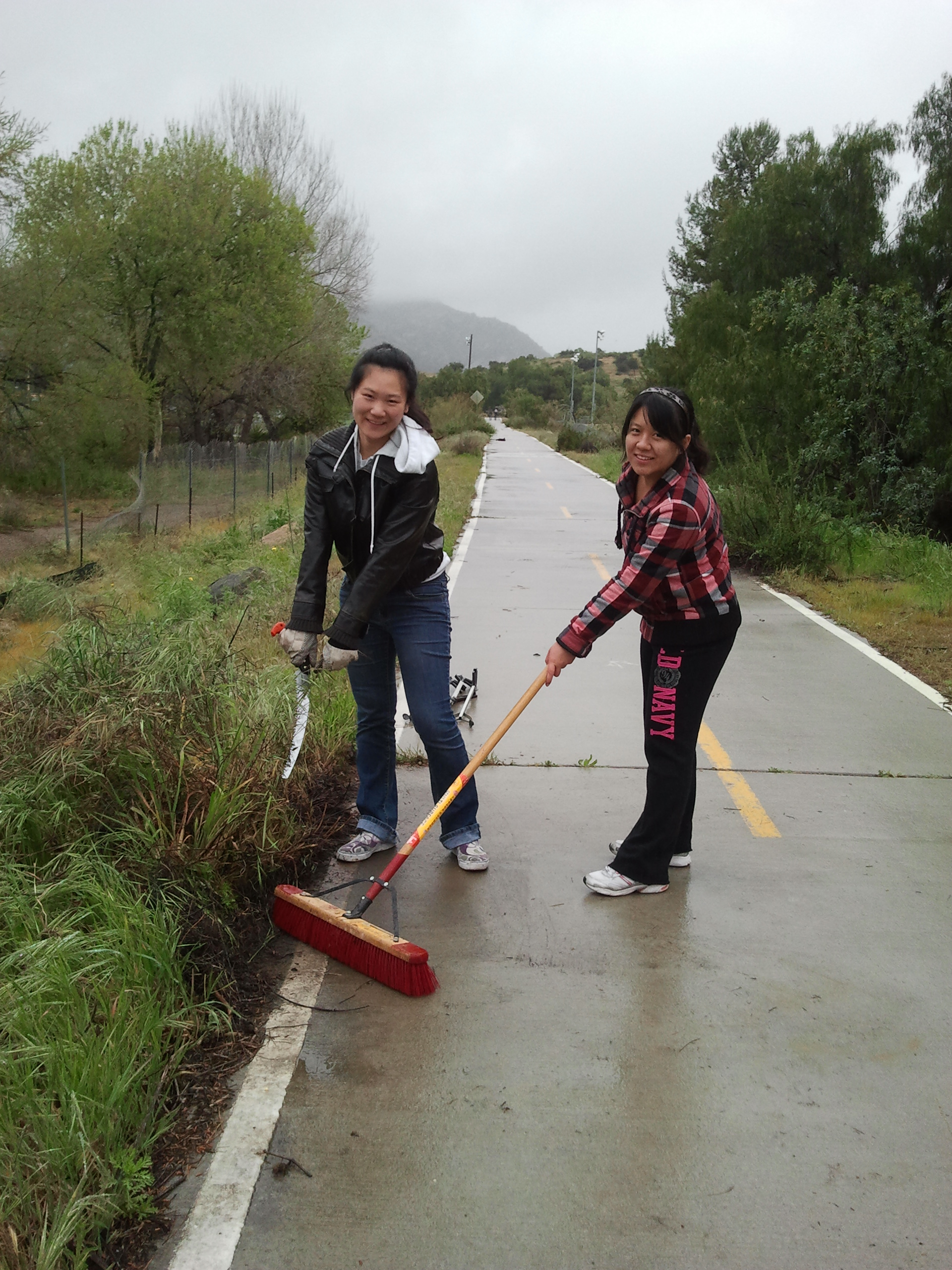 Today, we drove inland to Lakeside, which is almost near the desert to do a riverbed cleanup with the Lakeside's River Park Conservancy. We meet Monica, one of the Conservancy's wild life biologists at the trail and some other regular volunteers. Apparently, this area used to belong to the natives before they were moved to reservations and they had planted many edible plants that still grow to this day. This trail is frequented by members of the community: joggers, walkers and horseback riders. Thus, it was important to clear the plants that have overgrown the trail to ensure the safety of all those that use this popular trail.

We not only picked up trash from the trail, but also cleared the path of non-native plants. We used our hands and feet to pull up the non-native plants and for the more tough plants, we used knives/machete-like garden tools to cut them up. Then, we used brooms to brush away the loose branches and dirt. It was excellent physical exercise and the air was really fresh because it had just rained and there was a light drizzle. We covered about a mile and a half of thick vegetation and the path was much safer for people to use.

Monica pointed out many of the native and non-native plants. For instance, some of the non-native plants were planted by settlers from Europe such as daisies and the Palos Verde tree because they were pretty or for food. We learned how there is a huge variety of plants that are surprisingly edible. For instance, Monica showed us white sage, which smells very potent and is bought for $8/lb as the supermarket, and black sage, which smells somewhat less potent. With white sage, we could use the leaves to make tea as well in a 1:4 leaf to cups of water ratio or in food. There were buckwheat plants everywhere and when it becomes dry, it can be grounded up into flour to make all sorts of yummy baked goods. There were many varieties of mustard plants and we found Peruvian pepper plants, which can be ground up to make pepper. In addition, miner's lettuce is very rich in Vitamin C and tasted pretty good! We could make a very healthy salad just by picking up the edible plants in the wildlife and sustain ourselves by living off the land -- just like the natives did hundreds of years ago.

In the afternoon after lunch, we drove to the offices of "I love a Clean San Diego" and picked up our painting kits in order to stencil local storm drains in order to prevent sotmr water pollution. We used paint to stencil a message on the curb of a storm drain that says "NO DUMPING GOES TO OCEAN/ NO TIRAR BASURA LLEGA AL MAR."

Storm drain stenciling is effective in educating the public about the connection between local waterways and the ocean. Apparently, about 80% of litter and pollutatst in the ocean originates from inland areas and not from beach-goers and is washed down to the ocean through storm drains and waterways. Even though the water from homes goes through sewer treatment to be treated, the trash, runoff, and debris along streets and outdoor areas that enters the storm drain system travels untreated to waterways beaches and the ocean. Ocean polluntants threatens and endangers wildlife, threatens human health and quality of life.

Thus, we walked around downtown San Diego stenciling the signs on the curbs next to storm drains using our painting kits. In the beginning we actually used too much paint onto the stencil but we learned that we had to dab for the letters to come out more clearly.

Today, we gained perspective of how the environment provides invaluable resources for us. Therefore, it is our duty to not only be conscious of the impact of our own actions and protect the environment, but also make other people aware in preventing detrimental effects to our natural world.