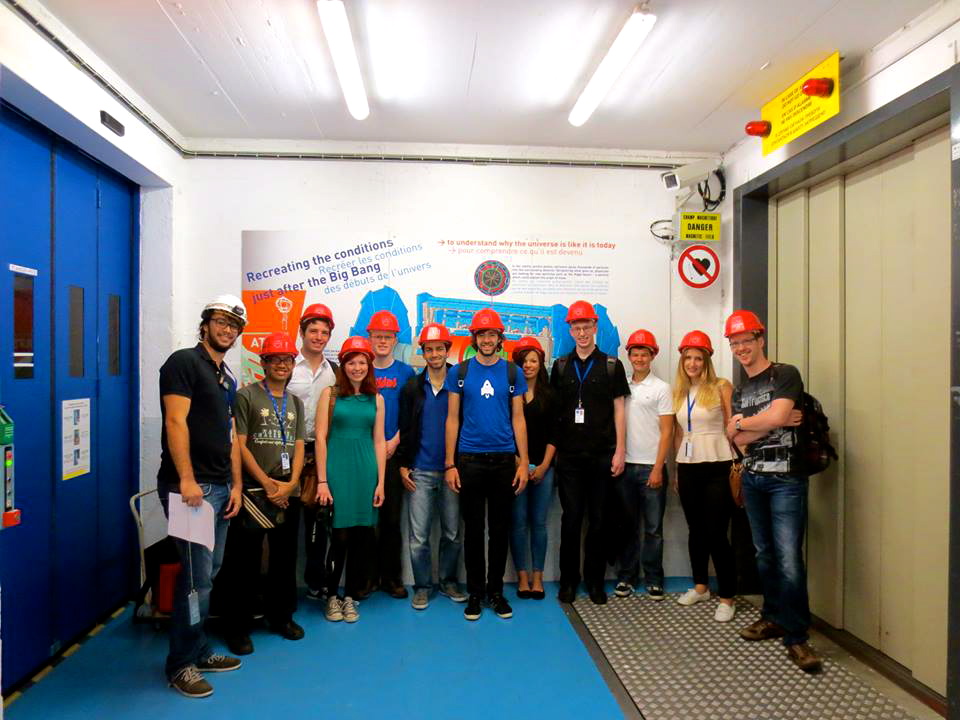 We are reaching the end of our second week of work. I completely forgot that today was the 4th of July for Independence Day seeing that the new celebration around here, at least amongst the summer students, is Higgs Day. It was exactly one year ago that the public announcement was made for the discovery of the Higgs candidate boson at 125 GeV. It’s pretty cool thinking about what it was like last year when I was in the main building during the announcement and all of the chaos with the press, and now we are here working on studying specific properties of that boson.

We have made a decent amount of progress over this past week. I just finished my code for producing the weighted background for fake photons in the bbgg decay channel for the diHiggs decay. I also got to go on a tour of the ATLAS detector, the largest detector ever made. ATLAS and CMS are the two general purpose detectors at CERN which measure a variety of different particles and can study many different phenomena. Since their areas of research overlap, just with different approaches, they are considered somewhat of competitor detectors. Caltech works with the CMS experiement. One of the major differences between the two is the size. ATLAS is huge, around 45 meters by 25 meters, whereas CMS is relatively smaller, 25 meters by 15 meters. ATLAS is unique in that it uses an inner solenoidal magnet and an outer toroidal magnet.CMS is also incredibly dense, hence the name, Compact Muon Solenoid, since it has a decent amount of steel which helps with the creation of the high magnetic field from the superconducting solenoidal magnet which allows it to bend the trajectories for muons and measure these particles with a smaller detector radius than ATLAS.

Last year I had a chance to go down and see the CMS detector so this year I was pretty excited when some summer students mentioned setting up a tour of ATLAS. A group of 12 of us got to put on hard hats and descend into the caverns to see the detector. It is pretty nice being a student here since normally the public tours are booked months in advance whereas we are able to get connections through out research mentors to go down on private tours.

To go down we had to descend down into the caverns. Our guide had to pass through this retinal scan station just so the doors would open for us. Then we got our hard hats and headed on down.

The detector was pretty monstrous. I actually couldn’t fit it in a single frame no matter what angle I took it at. Here you can only see one small portion of the end cap.

To get an idea of how huge this machine is, here is a model of what the entire detector looks like. The portion that you are able to see in these photos is just the top portion of one of the blue rings on the side. It was pretty phenomenal. I still have to say that I prefer CMS, though I may be a bit biased, but one has to appreciate the work that went into designing these machines and the complexity of the system. At the same time there is some beauty in the simplicity of the general design, such as the fact that the muon chambers are really just containers filled with gass and a wire running through them. Granted this is enough to start an avalanche of electrons when a charged particle passes through which can be detected by the electronics attached to the detector.

Here is the control room for the ATLAS experiment. Someone has to be here at all times, 24/7, even now when the LHC is shut down, just in case they need to cut the power for safety reasons. I’ve heard that this room also was featured in Angels and Demons, though don’t quote me on that.

Getting to go down and see the detectors is a pretty awesome and unique experience that one gets when doing research at CERN. There are quite a few opportunities to go down and see the machinery that actually outputs the data that we use to make our plots. Professor Spiropulu set up the opportunity for the three of us to actually go to the Prevessin site to meet the hardware team that is building the new muon chambers for the end caps of the CMS experiment. We got to walk through the factory and see how they construct and test the individual pannels that build up these chambers in the end caps. It’s one thing to look at the detector as whole but another to get to see the inner compenents of the machine, down to the individual wires in the gas chambers. I was already pretty excited to be here but now I’m even more thrilled. It’s been a pretty good week in my book!