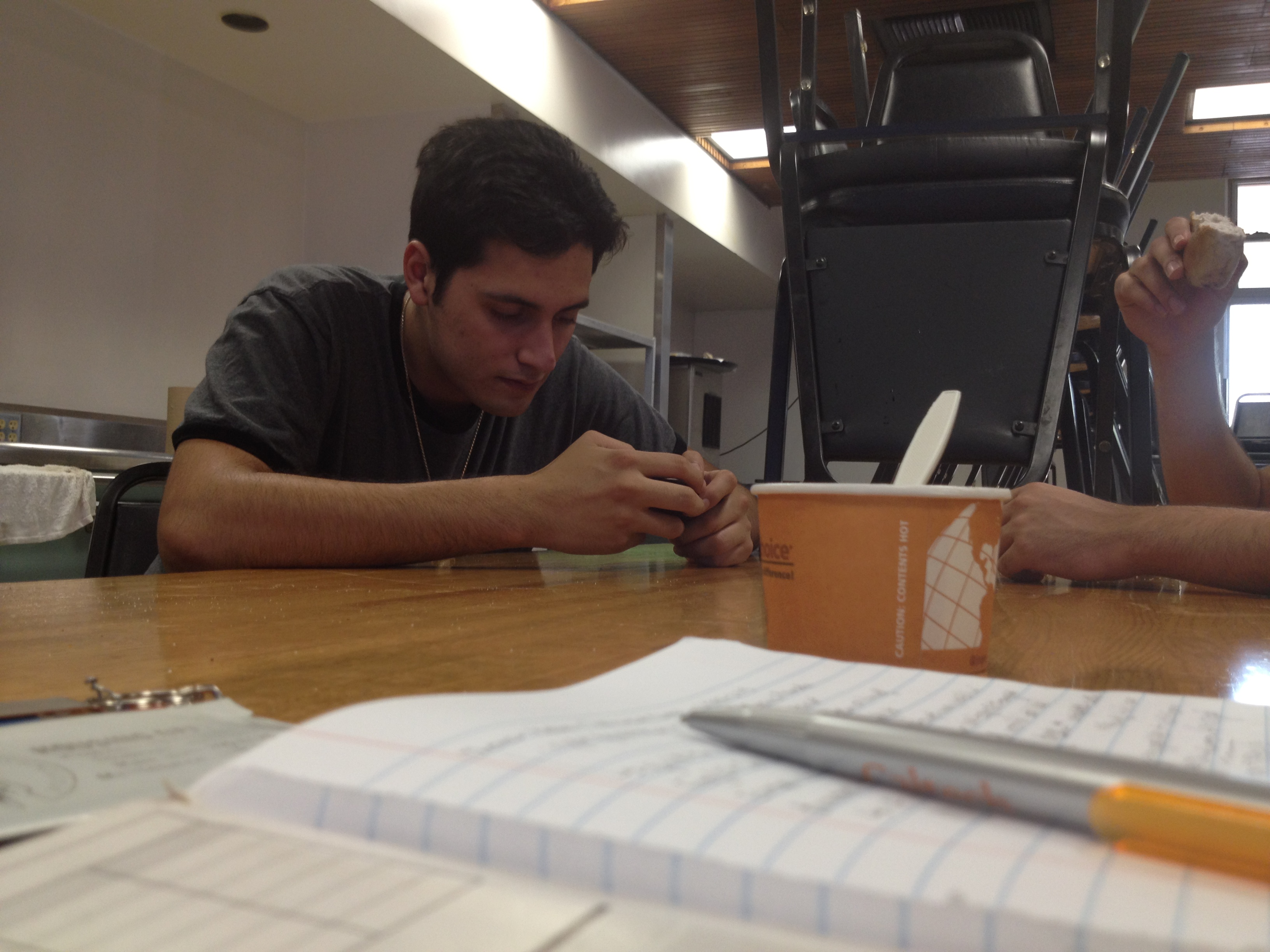 Back in Action PART 1

It has been a while since I posted anything up to the blogs, but I promise I have enough to make up 2 (3…4?) blogs.

It feels great to be back on campus for spring quarter. The weather is amazing, and I will try to vary up the places I am studying in order to retain information (there are funny ways the brain recalls things, which is why some people study well with listening to music). For me, I take in the sounds of the environment and the physical sense of being to get things done, as I am not the fan of monotony.

Aww…one of my study spots (the olive tree in front of Fleming) is occupied by a tour group.:( We have had a lot of tours because of the many high school spring breaks.

The third of my multiple new study locations: the bleachers near the tennis courts. It’s sunny, warm, I get fresh air, it’s isolated, and it’s close to PS12.

The first part of the “Back in Action” blogs will be about academics. Let me give you some insight into my classes.

I am still on core classes. I have Ma1c (the practical track-not proof-based math but more like learning the new techniques), Ph1c (the analytical track-relativity, vector calculus, and magnetism making the ultimate physics class), just like last term, Ph8 (a circuitry lab class), and PE (Zumba, which is harder than it looks and breaks out a sweat really fast). The newest additions to my schedule are Bi1 (introductory biology) and PS12 (introductory political science).

Bi1 got completely revamped for this year. We don’t have a textbook (to my relief because I would not want to carry 1200 pages of painful detail on my back) but instead a course reader consisting of articles on the latest research in the field of biology. Our first homework assignment was how to read a scientific article. I really appreciated that assignment because it let me have some patience in reading an article word-for-word and comprehending what a scientist was saying (though I felt and detested the “academese” <read: verbose writing> of scientists that my history professor from fall quarter despised). We are first going over evolution and how we trace back and categorize species. We recently read an article about tracing species back by RNA evidence (the 16S gene, which every species of organism has). We discussed in our recitation section if there were other ways to trace the evolution of life.

If you are interested in reading the article on the magnetic field stuff, here you go!

In PS12 we finished discussing the origins of political theory (starting with Thomas Hobbes). His theory is pretty depressing; he believes that mankind’s primary interest is to avoid an untimely and painful death. Hobbes follows that because of this theory, mankind needs a sovereign (self-preservation) in order to prevent his worst fear and than mankind should give up all his rights towards this sovereign in order to maintain peace (the social contract). I think Hobbes also proposed preemptive violence in order to maintain the peace. Hobbes’s theories are quite fascinating but quite unrealistic. We got into discussions about his work Leviathan and whether mankind can cooperate. For “homework” we have to watch movies and write papers on them. I don’t mind writing so much because I have been blogging for admissions, and I feel it has broken my fear of communicating by the written word. However, I am not the biggest fan of Clint Eastwood movies (Gran Torino and Million Dollar Baby were not my cups of tea, though the Academy rated them well).

What I find fascinating about my classes this term is how they tie into other classes I have taken or into each other. First, calculus and physics, where we use the del operator and find its use in electromagnetism. Second, physics and biology, where there are ways certain bacteria utilize magnetic field to search for microaerobic environments to survive (my biology professors were excited to hear that the practical physics track read about this in their section). Third, biology and political science: the need for social interaction is in mankind’s genes, and that is why human cooperation is possible (and why the worst punishment possible is solitary confinement). Fourth, political science and philosophy. Everything I have learned so far in political science I learned in my philosophy class last quarter, and it makes me gain a deeper understanding of the material from last quarter.

On another academic side, I declared my major as Applied and Computational Mathematics! And, my SURF is confirmed (I submitted my documents today). I will be working at JPL in oceanography, geophysics, and statistics. Pasadena summer, here I come!

*Quote of the day: **Dean Kiewiet teaches PS12 at Caltech. We were discussing how the prisoner’s dilemma is the *E. coli of political science research. However, he mentioned that it does not apply when dating (in a 50-50 situation). His advice? “Always listen to the girl. I have been married for 33 years, and I assure you it works.”