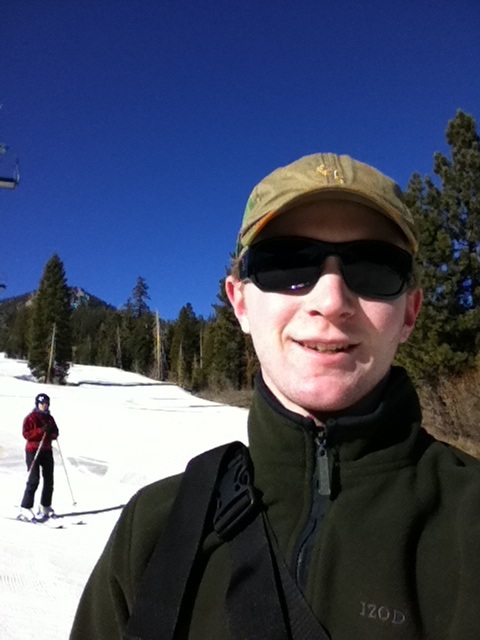 So somehow it worked out that I got back to Caltech on the same day that I started classes. I had arrived at the airport around 11:30 p.m. on January 3, but my shuttle didn’t drop me off until 1:30 am. It wasn’t too bad though, my first class started at 10 am so I was able to get a decent night’s sleep. And at least I wasn’t driving from Colorado- my friend Matt arrived around 4 in the morning after driving the whole day.

This is going to be my second and final term completely on pass/fail. Over break I wasn’t too sure if I wanted to test how well I can do by working hard and then learn what I’m going to need to adjust for third term, or if I wanted to sort of get by and enjoy the relaxed atmosphere as I did first term. Well I figured that it would be easier to start working hard and then slack than to slack and then begin working hard, so I chose the former. We’ll see how long I can keep it up.

Turns out I have picked the best set of classes I personally could have. I can just tell that my Humanities course is going to be great this term- I’m taking Right and Wrong, a class on the philosophy behind morals, and already in the first class some heated discussion took place. Also, it somehow worked out that the combination of practical track Math and analytical track Physics allowed me to be worry-free over the ski-trip from the 6th-8th with no homework due. (Both anal Math and prac Physics had work the first week back.) Then when I got back Sunday afternoon from the ski trip, I couldn’t even start chemistry work early because they had not posted it online yet. You could say I’m feeling pretty good about the start of this term.

Now on to the ski trip:

For the most part I believe people had fun, but the snow… well let’s just say there wasn’t much of it. Mammoth Mtn. and that whole area had not gotten much snow this year, so anything that we were skiing on was man-made snow. Which unfortunately turns to ice much more readily than real snow. That didn’t stop me from skiing for 7 hours straight though! I hadn’t been skiing for more than 2 years, so I simply had to get on the slopes. It was awesome.

I went to the top of the mountain at some point, partially to say I had and partially because I got to ride the hardest slope up there, and the worst part was not the steep incline. It was the wind. At that altitude, the wind was intense, and it picked up ice from the slopes as it went. Sort of felt like it was hailing upwards. Once you got 30 feet down the mountain it got a little better though, and I was able to enjoy the run.

Other than skiing, it was fun hanging out with all my Venerable friends.

On the way back, one group of cars drove by Johnny Depp!! After basically stalking him on the highway for about an hour, my roommate got the photo below. I don’t know if you can, but if you download the photo and zoom in, it really does look like him. He seems a little angry too…

Unfortunately, it turned out that the tattoos were a little different than the ones on the real Johnny Depp, though this guy could have definitely fooled me.