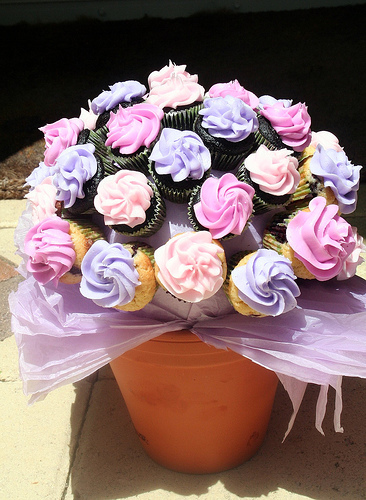 I am sure every house has their own way of celebrating the birth of its members, but in Venerable we have this tradition where on the night before a person’s birthday we bake some cake or brownies for them, and then with as many people as are around we present it to them at 12 am. And last semester, my friend Sophie’s birthday was coming up so two of her friends (Corwin and Sue) and I decided to make a very interesting cake. The idea was to create a flower out of cupcakes, as seen below, which is **not **the one we made.

Seems pretty cool right? We thought so too… but I don’t think any of us anticipated how much work it was going to be.

We estimated that we would need to make about 35 cupcakes, so we looked up a red velvet recipe for 25 cupcakes and decided to double it. We kinda figured that’d be enough to ensure we would have a few cupcakes to eat along the way. It just so happens that my roommate Corwin is a really great chef,so he had this idea to make the icing we would use from scratch. However, he was the only one who knew how to make the icing and wouldn’t be back from his cooking class until around 10:30. (The cooking class is only once a week, and it is rare that classes go so late, but some are available then if you want them.) At the time, he thought an hour and a half would be long enough to make the icing and then ice the cupcakes.

On the night before Sophie’s birthday, after a few mishaps, Sue and I got all the cupcakes baked and ready to be iced. I don’t think I’m that bad of a cook, but somehow I managed to waste about two sticks of butter; I mixed the butter with baking powder instead of with sugar and had to throw out the batch. Corwin got back a little later than expected, but he got started on the icing right away so we were still pretty confident we’d make the 12 o’clock time.

I’m not going to describe the process of making the icing, (I really don’t even remember it…) but I can tell you it was very complicated… or at least time-intensive. Plus it kept slightly melting on us so we had to cool it down before we could use it. Corwin made two batches, one raspberry (pinkish colored) and one vanilla (white colored).And then we had to actually ice the cupcakes. It looked pretty awesome in the end! But we ended up finishing at around 1:40 am… it was a good a thing I finished all my work early.

As you can tell, they are all clearly impressed… and you should be too. I’m just kidding, if you’re a master baker, this is probably simple stuff for you, but except for Corwin, we were just beginners. It was fun making it, but I highly doubt I’ll ever spend so much time on baking here at Caltech again. Or even have the time for it.

The reason the title is plural is because I also wanted to talk about my roommate’s birthday which was on the 17th of January. To preface it, I just want to say a little about Caltech.

Ever since I have come to Caltech, I have been amazed at the level of support that Techers show each other. From an upperclassmen explaining a math set problem to freshman staying up four hours later than needed explaining the chem set to their peers, people here really try to help each other, and not only on schoolwork. I had never expected to find this in college. Perhaps it’s by necessity or perhaps it’s by design, but I think it’s really great that we have such a culture.

In that spirit of helping, several friends and myself pooled some money together and got Corwin an iPod nano with lots of music on it for his birthday. The reason we did this is because not only had he lost his bike when he got back from break (someone cut through his lock), but when he sent his computer in to get fixed, they wiped his hard-drive. It would have been a little much to try to get a new bike, so I thought the least we could do was replace some of his music content. He also runs a lot, so now he has the option of listening to music while he runs.

We also got Tom Mannion to take Corwin and a few other people out to Korean BBQ for Corwin’s birthday. (Tom’s official title is the Senior Director of Student Activities and Programs… I think. He is a really cool guy, you should get to know him if you ever come to Caltech. He also runs the cooking class, which is how he knows Corwin pretty well from first semester.) I think we all got completely stuffed from that dinner. It was an all-you-can eat thing, and I got to try cow tongue, kobe beef bacon, and even some intenstine (which was a little too chewy for me honestly).

The picture below is of the intestine cooking. It’s burning because of all the fat released when you cut it open to cook the inside too.