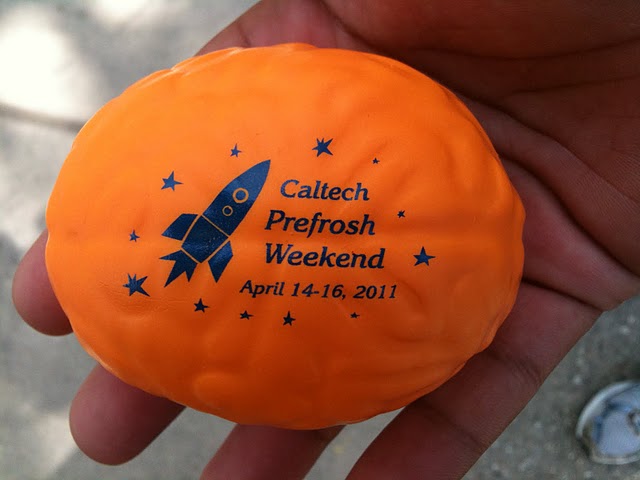 First, some administrative business. Caltech’s regular decisions have come out already. For those of you accepted, welcome to the Class of 2016! I look forward to meeting you at CIAD/PFF/PFW during April. If I have any advice for PFW, don’t forget shower shoes, a towel, a sleeping bag (albeit my roommate and I have an extra mattress, but that’s because we are that awesome), AND your parents (they will be well-informed at PFW). Undergrad admissions has some fun stuff planned out, so you should definitely make the effort to come to the admit events.

Anyways, some good(ish) news. My lab results from my illness came in the first day of finals week. There were no signs of food poisoning nor dehydration. It turned out to be a viral flu, and I am not the only one to have it. Just two hours east of Caltech (in Indian Wells), eight tennis players had to withdraw from the WTA/ATP1000 event because of the said bug (even Roger Federer was sick, but he won! YAY). You can read the article here: https://sports.yahoo.com/tennis/news?slug=reu-indianvirus_pix

I started eating normal food this weekend, and I never felt so disgusted of soda, saltines, and pasta and so loving of Greek and Indian yogurt (there is a difference, as Greek yogurt is really thick while Indian yogurt/curd keeps a loose shape from the whey) and curry. As I was still transitioning from the lack of food to normal meals, I eat about half of what I normally do (and instead of three meals, I have ended up snacking). I think I have a constant fear of throwing up ever since that concert night, and I have a slight aversion to food. Nevertheless, my increased aversion to food didn’t stop Caltech and the members of its community from providing insane amounts of food on campus.

On the weekdays during the quarter Caltech has four main ways of distributing food: house dinners, open kitchen (where from 7 to 11 AM and 2 to 5 PM the North, South, and Avery kitchens have drinks, cereal, dairy products, and salad and sandwich fixings, like opening the fridge at home), d(eclining)-bal(ance) food, and “free food” events (FFE). For the third part, students can freely spend it in Chandler, the South Kitchens for lunch, the C(onvenience)-Store, Red Door Cafe, Cafe at Broad, and C(offee)house. In second and third quarter students get $475 in dbal and $400 in first quarter (because of Rotation meals, which are like house dinners but extend to lunches). Aside from the above food, there are random FFEs because of special occasions. ASCIT has “Midnight Donuts” where at midnight on Wednesday of Week 8 there are A LOT of donuts, milk, and orange juice for students to eat. Plus, there are Pizza Classes (every week), Student-Faculty Lunches (once a month), and Frosh Women’s Lunches (FWL, every other week), and club lunches.

During finals week we have “Snake Kits”, where, from 8 to 10 PM on two days of the week, the North Kitchen has yummy snacks for students to power through finals.

Food! I ate the cheese and cookie while taking my 4-hour chemistry final, and the rest (except for the potstickers, which were really greasy and therefore disposed of) I saved for breakfast (we have a small fridge in our room). I’ll explain the instant-noodle box soon.

There is also “Midnight Breakfast” (yes, the breakfast always advertised by Caltech), where, at midnight, students have breakfast because of studying for finals. After all, breakfast is the most important meal of the day!

However, the next day (or that same day?) was Pi Day, which means Tom Mannion provides, on 3-14 at 1:59 AM, 26 pies of 5 varieties on the Olive Walk. I was too tired and knew I had to take my chemistry final the next day and was too full from midnight breakfast, so I missed out on eating pie on Pi Day.

I forgot another source of food: the lovely members of the Avery community. Averites have a love for baking/cooking/culinary arts (and we live really close to Del Mar, so we have easy access to off-campus). People will always be baking cookies, keeping cakes/food from Tom Mannion’s cooking class, celebrating birthdays, and the likes. The RAs and AC of Avery also bake cookies and have snack carts during finals and midterms week. Anyways, March 14th also happened to be White Day (kind of like friendship day in Japan). I had mentioned that the Avery guys had made cookies and cards for Valentine’s Day, so the Avery girls did something special for the guys. We made Twix cheesecakes with Oreo crusts and, using the leftover Italian soda bottles from Interhouse, created notes for the guys.

And here comes my (and a lot of people’s) “first world problem” at Caltech (you can play the world’s smallest violin out of sorrow if you must).

I am fortunate for the presence of so much food, but I really don’t know the capacity of any person’s stomach. I had a free lunch or two every week in some shape or form (pizza class+SFL+FWL+Caltech SWE), I stay in Avery because of the distance to the coffeehouse and the presence of food in Avery through open kitchen and culinary flair and because I have a small fridge in my room with food to defrost over the weekend for dietary needs and conveniences (and with yogurt from Trader Joe’s because the yogurt in the C-Store has gelatin); I lose appetite whenever I cook, and because I am vegetarian, whatever I buy tends to cost less. Yes, quite a lotto-show sentence.

I had a huge dilemma at the end of term: I had about $130 in dbal to spend in about a week because dbal ends at noon on the Saturday after finals. I knew what I had to do: raid the C-Store for non-perishables. The problem lies in this: I can’t buy much in the C-Store that is healthy, non-perishable, and worth my effort. I would buy instant noodles and cans of soup if they were vegetarian, granola bars and crackers if they didn’t have flax seed (which is not good for asthmatics), fruit juices if they didn’t have grapes and pineapple (allergies), and soda if I had the ability to finish at least one cup (unless I am sick, but I had enough soda the week before). Therefore, what to do but buy out the C-Store’s stash of Dasani 1-liter water bottles and Powerade (and a couple of smoothies and packs of dark chocolate M&Ms to finish the change)?

Why did I spend it specifically on water and Powerade? Staying in Pasadena for the spring and summer means living through the heat, and dehydration can be a serious problem in California (dryness+heat=summer ovens). I would have bought food for the food drive that occurs every quarter, but I already help out the hungry every year, so I decided to spend the dbal for myself. Looking at next quarter, I shouldn’t be in the same quagmire because I have no pizza classes, and I am ready to declare my major when I come back from spring break.

I wonder, though. Where will I put all those bottles? Hmm…I’ll figure it out.

**Quote of the day: **On March 12, I attended the Stephen Hawking lecture on black holes. It was amazing, and I am even more humbled by Prof. Hawking because, although so knowledgeable, he had a great sense of humor <read: jokes about French people, running away with a beautiful alien, criticizing Disney, and spaghetti analogies>. The lecture was pretty short (45 minutes, but understandable because of his restriction in communication). I mentioned to my friend John that, as Shakespeare says, “Brevity is the soul of wit.” His response, “But that’s from Shakespeare’s longest play.”