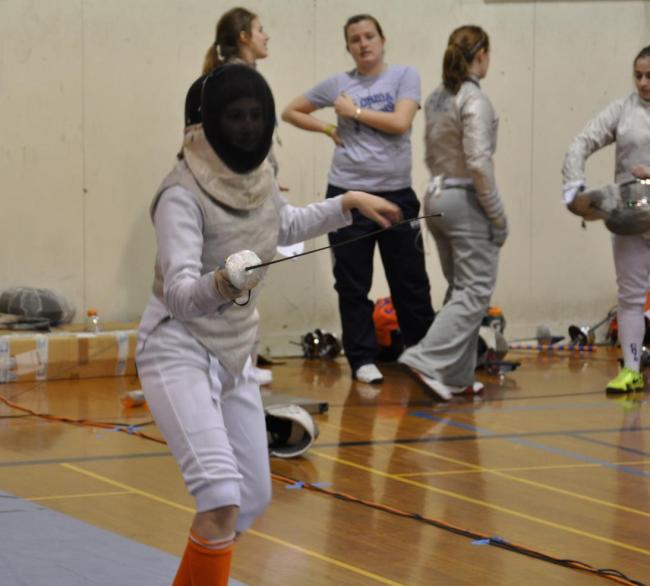 An introduction to fencing

As I mentioned in my last blog post, I’m pretty involved with the Caltech fencing team. I’m co-captain of the team, and I fence foil. In this post, I thought I’d give a quick run-down of how fencing works and how we do athletics at Caltech. I’ll also give a brief recap of the NCAA tournament we hosted here last weekend, the Western Invitational.

Foil is a point weapon (you only hit with the tip), and the target you can hit in order to score a point is limited to a metal vest that covers the torso and the back (but not the arms). If you hit on the target area, you score a point, and if you don’t hit, you score “off target,” which just means that the action stops but neither fencer earns a point; you cease fencing for a few seconds and then pick up where you left off. If both fencers hit each other at the same time (off-target or not), then the referee decides which fencer had “priority.” In order to have priority, you have to have the attack, meaning that you must start extending your weapon at the other fencer before they do the same to you. Alternatively, if your opponent has the attack, you can parry their blade by hitting it with your blade, which transfers priority from them to you. Sounds pretty simple, right? I wish.

This is some Olympic foil fencing from Beijing:

These are just highlights (they have some nice slow-motion replays so you can really see the points). If you’re interested in seeing more, you can see the full replays of individual and team matches from this year’s Olympics and the 2011 World Championships in Catania. I highly recommend anything the Italians fence in; they have amazing teams, especially in foil.

Epee and sabre are the other two weapons of fencing. Sabre is similar to foil in that it has the same rules about priority, but the weapon is entirely different. While foil is only a point weapon, sabre has no constraints on what part of the weapon you can hit with, generally making it a “slashing” weapon. The target area is also from the waist up, including the arms and head. It’s also generally much faster than foil. Like, crazy fast. Epee, on the other hand, is a point weapon with no priority rules and no rules about target area. Your entire body is target, so if you hit your opponent, you get a point. If both fencers hit at almost exactly the same time (within 1/32 of a second), both score a point. Epee bouts tend to be slower and more calculated, as fencers often get points by aiming for the wrist or the toe of their opponent.

So that’s my little spiel on fencing. I’ve fenced since high school, and I absolutely love it; sometimes I think it’s one of the only things that keeps me sane! But as much as I enjoy it, being a student athlete at Caltech is hard! We’re obviously known more for our academics than our athletics, but being on an athletic team here is still very demanding!. You’re usually taking 5 classes per term (with sets or essays due in every one of them), plus you have practice 3-6 times per week, and games/tournaments on the weekends! Even if we’re not known for our dominance on the playing field, our coaches and students take training and practice very seriously, so being on a team here is just like being on a sports team at any other school; you have to be committed and dedicated throughout the whole season, every single day.

One way that Caltech athletics is different from athletics at any other school, however, is that our teams are generally no-cuts. We’re a small school, so many sports (especially niche sports like fencing) will let anyone who is interested and willing to make the time commitment join the team. It’s pretty cool because it gives you the opportunity to try something that you’re interested in but you’ve never been able to try. And you get to learn beside people with a ton of experience and people just as new as you! I’ve really enjoyed working with people who have never tried fencing before (and trust me, there are a lot of them on the team!), because you really get to watch people grow; a lot of people I could originally walk all over now give me quite a challenge! And I get the opportunity to teach new people as well, which is both gratifying and helps me refine my technique. So it’s really a win-win for everyone.

If you’re interested in what a practice schedule for a sport at Caltech is like, here’s a normal week for someone on the fencing team:

So we’re doing something pretty much six days per week by the end of fall term and all of winter term. We have this weekend off, but last weekend we had a tournament, the Western Invitational, which we actually hosted here at Caltech. Teams from Stanford, US Air Force Academy, Florida University, UC San Diego, and Northwestern all came. If you’re wondering why there were a bunch of Division I schools like USCD and Stanford at Caltech, a Division III school, well, it turns out that fencing is so small that there is only one division. So we fence DI, DII, and DIII schools at our tournaments, which gives us a lot of experience fencing people who are much, much better than us. There’s even an Olympian on Stanford’s men’s foil team! How team fencing bouts work in the NCAA is that each school has a three person team in each gender and weapon (so men’s foil, women’s epee, etc.). When you fence another team, each person on your team fences each person on the other team in bouts to 5 points or three minutes, whichever comes first. So nine bouts total are fenced per match, and the first team to win five bouts wins the match.

We did pretty well for ourselves at the Western Regional. Personally, I won bouts against Florida and Air Force, and some of my teammates won bouts against schools like Stanford and UC San Diego. The men’s foil team even had an overall win against Florida! They won 6 out of their 9 bouts. And even in the bouts we couldn’t win, we didn’t let them wipe the floor with us; even my teammates who were fencing in their first or second tournament ever put up a fight in every single bout. We also had spectators, which is a pretty novel thing for the fencing tournament. The Student Athletics Advisory Committee advertised the tournament and encouraged people around campus to come to the gym and cheer us on. Tom Mannion, the director of student life, even brought some delicious food. So all in all, it was a pretty good day.

Our men’s epee team, plotting the demise of their next opponents. Or discussing what they want for lunch. I’m not sure.

There’s a recap of the event posted on the Caltech website, which you can see here: https://www.gocaltech.com/sports/fencing/2012-13/releases/2013011240jv8t Well, that’s all I have to say about fencing. We’re going to a tournament at UC San Diego next weekend, so I’ll keep you posted on that. Thanks for reading!