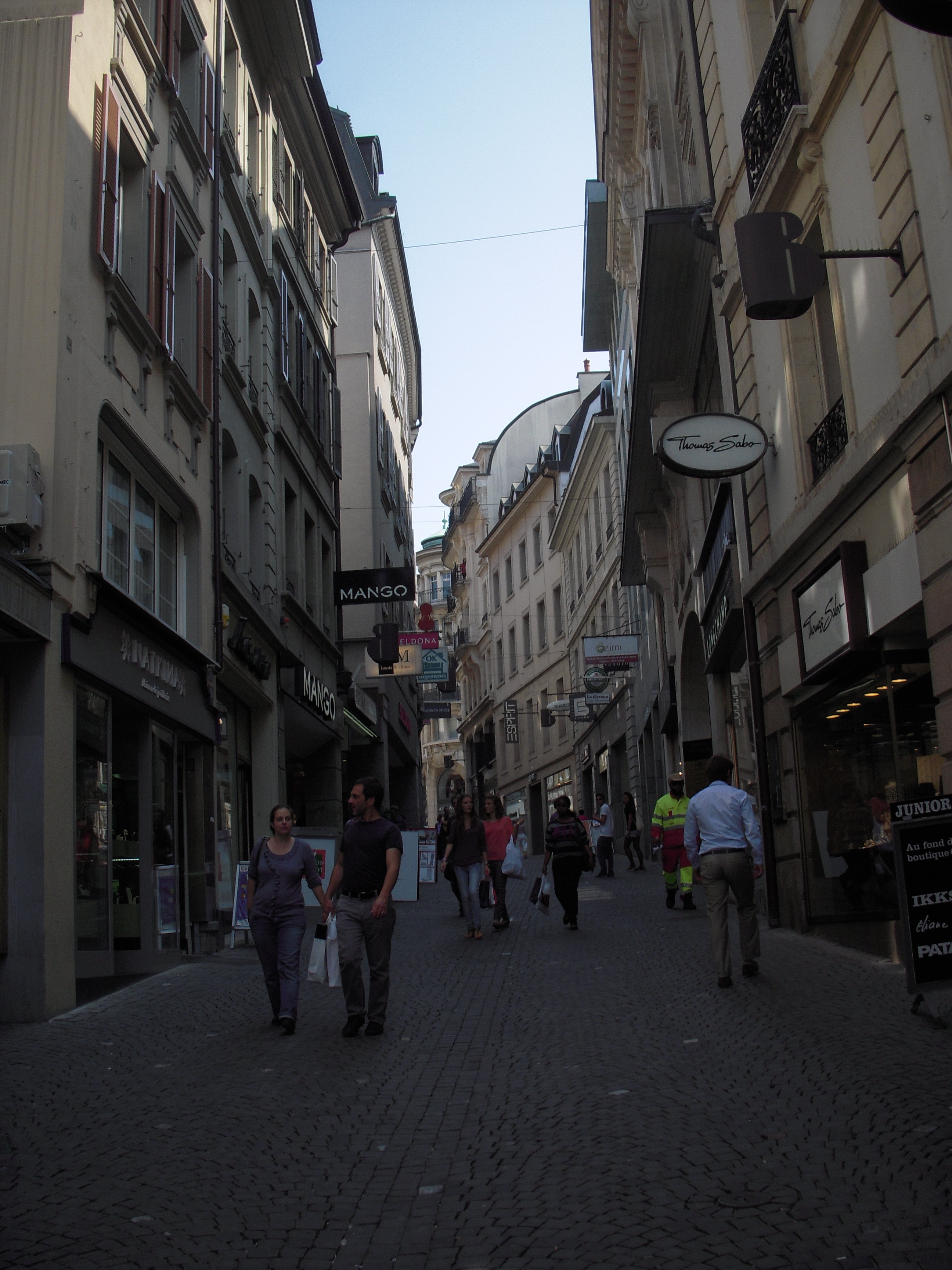 After a long trans-Atlantic plane ride, we finally were in Switzerland!! We landed in Zurich in the morning and took an hour long flight to Geneva, where our Swiss adventures would commence. We immediately noticed in the airport and train station that everything was in the three Swiss official languages—French, German, Italian, and only some English. Everyone (at least the airport and train employees) seemed to be trilingual and also spoke English.Also, customs was super easy to go through. I think customs and security combined during our layover in Zurich took a total of 15 minutes, and we didn’t even have to take our shoes off to go through security, which was a pleasant surprise for us.

From the Geneva International Airport, we went to the connecting train station for a connecting train to Lausanne by looking for the SBB CFF FFS sign, which stands for “Swiss Federal Railways” (SBB in German, CFF in French and FFS in Italian). The Swiss pride themselves as Europe’s most punctual railway system and covering almost all of Switzerland. Over the next month, we would experience a very efficient public transporation network since our Swiss Youth Passes covered all public transportation including trains, buses and ferries. We activated our Swiss Youth Passes by asking a very friendly SBB CFF FFS employee.

This is what a typical Swiss Federal Railway train looks like. We would always look for the SBB CFF FFS signs.

Since we were in the French-speaking area of Switzerland, it was really interesting how most signs, announcements and conversations were in French! I could understand most of the French written and spoken but it was the perfect opportunity to practice speaking. After the train ride from Geneva, we arrived in Lausanne at 11 am or so and our hostel was very conveniently located right next to the train station. We dropped off our packs at the hostel and decided to explore Lausanne Oldtown by doing a walked tour after lunch. We bought baguettes and a variety pack of Swiss cheese from Co-op, which is one of the most popular grocery chains in Switzerland. The classical Swiss cheeses that we tried were Emmentaler, Gruyere, and Appenzeller. They were all very delicious!

We went to the Cathedral de Francois, which had a very magnificent organ above the door. The Lausanne Cathedral or the Cathedral of Notre Dame in Lausanne was more interesting because of the very intricate and flamboyant Gothic architecture, stained glass windows from the 13th century and a very cool organ above the door. It is apparently Switzerland’s largest Gothic cathedral.The 7000 pipe organ is one of the most expensive instruments in the world and was inaugurated in 2003. It took ten years and 150 000 hours of work to build the organ by the American firm Charles Breton Fisk in Boston. We found out that the Cathedral had a public organ performance the next day at 8pm and made a note to come back.

Statues and carvings from the 13th century

The very magnificent Fisk organ above the door, which apparently cost millions of dollars.

We were also able to explore the bell tower of the Lausanne Cathedral, by climbing narrow spiralling stairs to the four different levels. The air was very fresh (away from the numerous smokers) and the breeze was nice too. The view was extraordinary from the top of the Tower of the Cathedral because it was overlooking the rooftops of quaint French-style buildings and of the sparkling Lake Geneva waters in the distance.

The bell tower of Lausanne Cathedral.

During the Middle Ages, many medival cities had a nightwatch who would be stationed to prevent the threat of devestating fires and that no enemies were approaching. In Lausanne, the watchman walks up the 153 stairs to the top of the tower and every hour on the hour from 10pm - 2 am he calls out to the four directions “C’est le guet; il a sonné l’heure(“This is the nightwatch; the hour has struck”). Lausanne is the only city in Europe to continue this age-old tradition!

After the bell tower, we ran into some students from Pepperdine University, who were studying at the Pepperdine campus in Lausanne; we recognized each other because our American English stood out from the crowd. We also explored the Lausanne City History Museum (admission was covered by our Swiss Youth Pass) and learned about the city’s history from the 1st century to present day on the city organization, wars, books, life, agriculture, etc. We also visited two chateaus that were now used as the offices for the Swiss Department of the Interior. I thought it was humorous that the Swiss have enough castles to use for government office buildings.We then headed back to our hostel and checked in and saw our 4-bed dorm, co-ed. We had lockers in the hall, just large enough for our backpacks.

The cobblestone strees contribute to a quaint feeling that I was walking in a town with a very long and rich history. After walking up and down the very steep hills, my feet were pretty sore!

Carly with the Fountain of Justice in Lausanne. Unless the fountains explicitly state they are not drinkable, the water from these public fountains is potable!

We decided to go explore Geneva for the evening. After taking the train, we walked around and discovered to our surprise that everything was closed and the streets were nearly deserted! We found an open kebab place (the Mexican food of Europe). They didn’t speak English very well, but we gathered that there was a fete or holiday that is only celebrated in Geneva. Even the Jet d’Eau, which is a large fountain and one of the city’s most famous landmarks, was off!

Lake Geneva with the Jet d’Eau turned off in celebration of the Fete.

We asked a few others as we walked around but no one seemed to know exactly what the holiday was about.After walking along the waterfront,we decided to come back to Geneva another day when it was more lively and went back to Lausanne. We both were jetlagged and slept on the 40 minute train-ride back, so we decided to go to bed early. We were very excited for another adventure-filled day!!