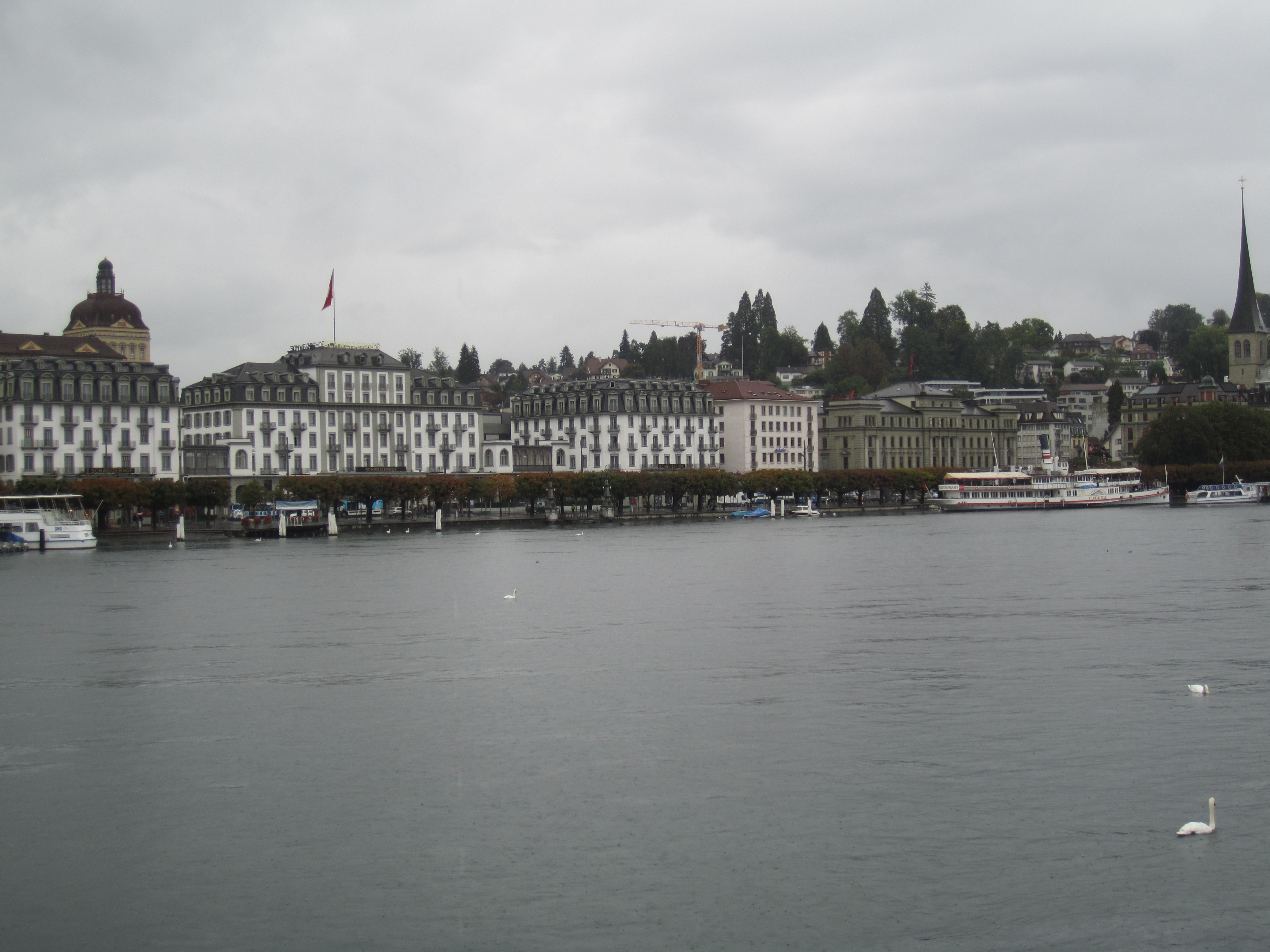 We decided to take the scenic route to Lugano, the next city we were staying in. First, we took a train to Luzerne. We had an hour to kill before our boat ride across the lake, so we stopped by a modern art museum e that had some weird exhibits and some really weird exhibits. There were a few that we just thought were stupid, but a few were pretty cool. One we really liked was a room with two guys continuously painting the walls. One painting them white, the other painting them black.

Seriously. For all the days the exhibit was open They were always approximately at opposite corners, so the room was half white and half black.. I couldn’t help but laugh every time I thought of it.

After the museum, we got on our boat and took a last look at Lugano before leaving the dock.

The cruise across Lake Lugano was a great experience. Even though it was raining, it was incredibly beautiful.

There were waterfalls cascading down, swans swimming in the water, and the lake itself was a deep teal.

Tall mountains surrounded the lake, and their tops were hidden by the clouds, which made them seem like they stretched upwards forever.

One of our fellow passengers was from Korea, so it was a nice chance for me to use some of my Korean again.

Here is the picture he took of me on the boat, after the rain had stopped.

We arrived in our port and said goodbye to the boat.

Before we caught the train to Lugano, we say a stone car just sitting out with no explanation. I guess it was just public artwork?

When we arrived in Lugano, we splurged for a nice dinner since we were pretty under budget on food. It was the most delicious minestrone and tiramisu I have ever had.

We had thin pizza for our entre. It was yummy, but difficult to eat since we had to cut it into bite size pieces instead of slices. Since Lugano is in the Italian part of Switzerland, we had some trouble communicating with the waiter and we accidentally ordered water instead of specifying tap water.

This meant we got a fancy corked bottle of Arkina water with matching glasses for over USD $10! And we were sitting literally 10 feet away from a free public water fountain whose water tasted exactly the same as the bottled variety. We went back to our hostel, where we shared a room with 14 other men and women and a coed bathroom with 30 other people. We sat in the common room for a while and socialized with the people there. We met some nice women who gave us advice about good things to go see while we were in Lugano.