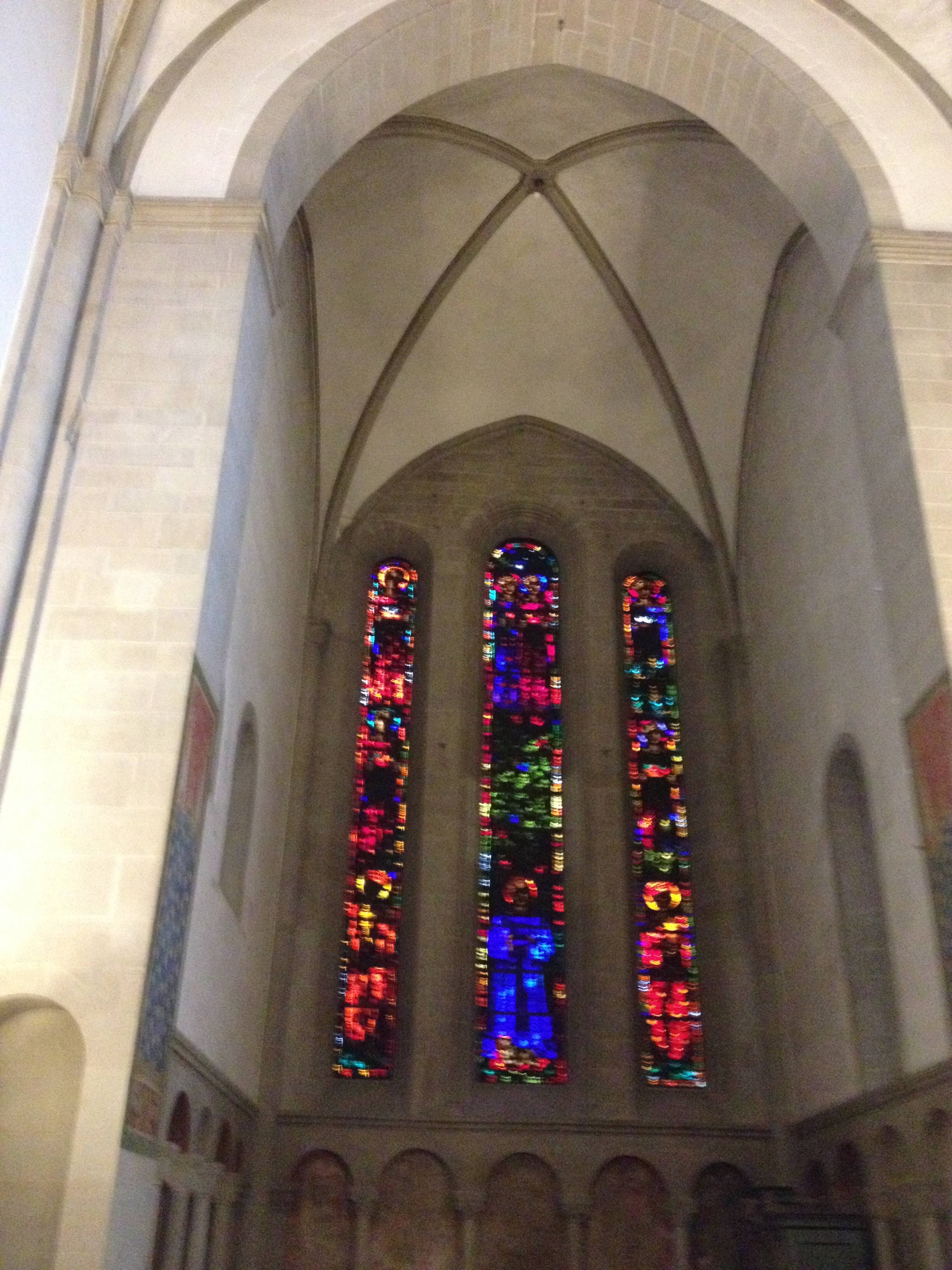 Today, we took a very early morning train from Lugano to Zurich that was exactly 2 hours and 40 minutes according the the very precise Swiss train schedule. When we arrived in Zurich, it was much colder than sunny and warm Lugano and it was even raining heavily! We had to pull out our raincoats from the bottom of our backpacks since we had not used them since hiking in the Alps. Our hostel was right in the center of downtown Zurich and so it was a convenient location. However, we spent some time wandering around downtown in rain from the train station, looking for our hostel. Once we found it, we hiked up four flights of stairs to get to the hostel lobby since it was above a restaurant. Then, we climbed up another three flights of stairs to our floor! We decided to go exploring despite the rain. We ran into some graduate students who were attending the local university, ETH. One of them, Haffi, had been at Caltech for one summer as a SURF student when he was an undergraduate and they agreed to show us around Zurich. First, we visited the church, Gross Munster. The Church had beautiful stained glass windows and also a crypt in the basement. We also went up to the towers and got a very nice view of Zurich and the river. Stained glass in Grossmunster. *

At Grossmunster with our new friend who lives locally in Zurich. We also found out the reason behind why there were two pulpits in all the European churches we had seen. The priest/minister would stand in an elevated round pulpit that had a mini staircase when talking to the congregation aboutadvice, news, etc. However, the pulpit up at the very front of the churchis for more serious and religious matters such as communicating with God, praying, etc. Also weddings and baptisms would take place up front. Thus, the two pulpits allow for a division of casual versus more serious matters.

Carly and I viewing Zurich from the top of the tower at Grossmunster! *

It was raining veryheavily when were were at the top of Grossmunster! We noticed that every hour, quarter and half hour was acknowledged by every church bell by the numerous churches in Zurich. The loud combined ringing and clanging goes on for at least 10 minutes past the hour! We walked around Bahnhafstrasse, which is a street filled with veryexpensive shops. We turned off to a small street that allowed us to look down at ancient ruins of Roman baths that had been excavated recently. The alley floor was made of grates so we could look down and see the benches and the construction of where the fire would be for the steam and power the heated floors. Apparently, public bath houses were an important part of the social scene for Romans since only the rich could have their own private baths.

At a flea market in Zurich. *

On our way to the Swiss National Musuem! *

Turning into the alley to look at the excavated Roman bath ruins! *

View of the Roman bath ruins through grates. We stopped by Confiserie Sprungli, which is a Swiss luxury confectionery manufacturer, to get some of their signature macarons that are called “Luxemburgerli”. We bought a box of different types of flavors of macarons. The macarons were not only colorful indicating the huge variety of different flavors but also some had chocolate and different creams in the middle! The Sprungli macarons were delicious and addictive like little bites that created explosions of taste! They were so good that we just silently savored the incredible flavor adventure each macaron brought.

About to enter the Confiserie Sprungli!

Delicious signature macarons at the famous Confiserie Sprungli! Next, we decided to go visit the Swiss National Museum even though it was still raining. I was surprised that the Museum was in a gigantic castle! There was so much space for exhibits and the ceilings were very high! There were exhibits about the development and rise of Swiss industry: originally textiles, then chemicals, banking, tourism and machinery. This progression contributed to the Swiss wealth and affected the clothing industry, money/coins, immigration/emigration patterns, religion, etc. I liked the collection of old coins from the various civilizations that existed in Switzerland.

Carly and I zooming in on a very intricate model of ancient times at the Swiss National Museum. On our way to dinner, passed a “beach” on the banks of the river where people could sunbath after swimming. However, since it was rainy weather, it was not getting much use even though seemed like it would be fun if the weather cleared up. For dinner, we tried a fondue/raclette place in downtown. Since Carly and I had gotten cheese fondue in Lausanne, we were both eager to try the raclette. For the raclette, we each got a small grill to cook meat on and little trays to place our raclette cheese on to let it melt. After the cheese melted, we would slide it off and combine it with the meat, cheese, potatoes, and vegetables for a delicious cheesy meal! I ordered a pork raclette and also had a dish of mushrooms, pickles/gherkins, a pear, baby corn, tomatoes and a sack of potatoes.Surprisingly, one of the yummiest things to dip in the cheese was some pear slices they provided us with.

So happy and excited to be trying delicious raclette! *

Close up of the raclette setup. The raclette cheese will be heated on a tray under the grill, which would be cooking the pork meat. Afterwards, we picked up some Swiss ice cream, which is from the brand Movenpick, that was passion fruit and mango flavored along with some sangria from the Migros. We went to the rooftop of our hostel and enjoyed the the lights and looking over Zurich while enjoying our ice cream.