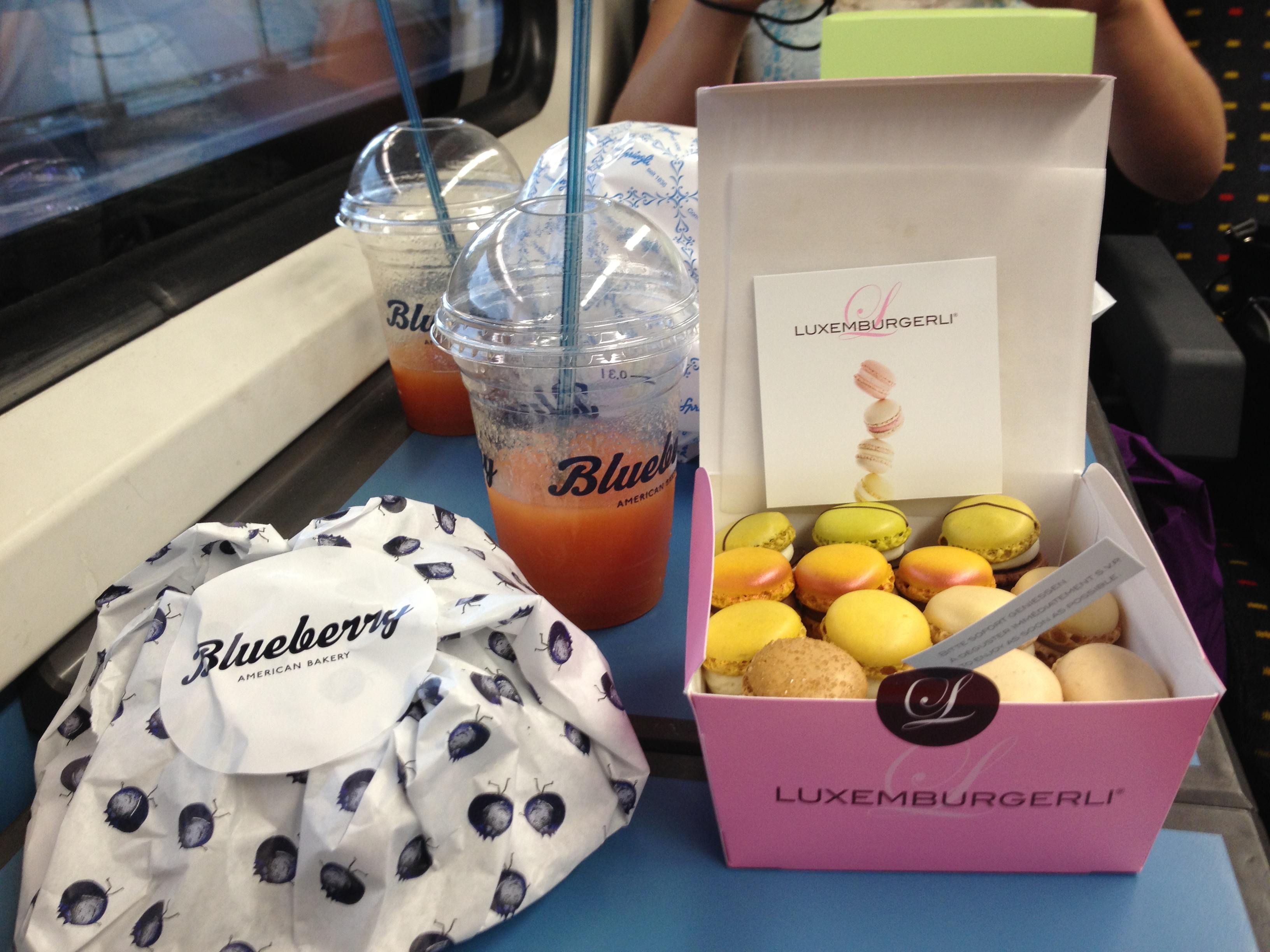 We decided to have a very healthy breakfast today so instead of our usual bread and cheese, we bought a box of macarons each from Sprungle Confiserie! I also got a cappuccino muffin, a blueberry muffin and an exotic fruit juice smoothie (pineapple, papaya, banana, etc.). We then caught a train from Zurich to Stein-Am-Rein through Schauffhausen.

Breakfast of macarons, pastries and fruit smoothies on the train to Stein-Am-Rhein. Carly’s uncle Dave has a friend in the gold industry in Stein-am-Rhein who he put us in contact with. Georg offered to show us around, so we took the train to Stein-am-Rhein to meet up with him. It was really nice walking around with a local because he could answer a lot of our questions about Swiss culture.

Enjoying the train ride! Stein-am-Rhein is a really amazing town. One of the oldest towns in Switzerland, it is right next to the German border and recently celebrated its 1000th year anniversary. There are only 3000 residents in the town, but sometimes they can get 10,000 tourists in a single day! This town has such an amazing rich history that there are many manifestations. A unique feature of many of the buildings is that many have intricate paintings on their outer walls that tell a story about someone who lived there, used to live there or a legend.

View of Stein-Am-Rhein on the Rhine River.

We saw an old castle uphill from the town. Stein-am-Rhein is about 5-10 minutes away from the German-Switzerland border. Even though the Rhine River is used as the natural border between the two countries, parts of Switzerland are on the other side of the riverbank such as Stein-am-Rhein. There was also a clock tower that had been rebuilt in the last half-century because the original was destroyed by an American bomb during WWII. The town is so close to the border and was mistaken as part of Germany. The Rhine River flows from Lake Constance. In the summer, people do river floats in the Rhine.

The gorgeous restored church and fountains on the cobblestone streets. *

Next to the Rhine River waiting for our ferry boat!

We took a ferry down the river from Stein-Am-Rhein to Schaufhausen. We sat on the top deck that was covered from the rain. At one point, for a portion of the ride, Germany was on one side and Switzerland was on the other. Apparently, Bussing is a German town but Swiss France are used.

View of the picturesque towns from the boat. *

When we arrived in Schauffhausen, we took a bus disguised like a train that toured around town and took us to the Rhine Falls.

Tour train of Schauffhausen! The Rhine Falls are simply spectacular!!! There are several layers with roccks in the middle. There is such intriguing and magnetic power behind the water and its gradient of colors– from frothy white to dark teal.

We rode a a boat out to the rock island in the middle where we could get a view of the Falls up close and also a panorama view of the Falls. The Rhine Falls were definitely cool to see upclose but the water speed and power looked brutal and unforgiving!

On the boat to the rock island in the middle of the Rhine Falls! *

Up-close view of the powerful and beautiful Rhine Falls! *

Observing the Falls from the middle island. *

Panorama lookout in the middle of the Rhine Falls! We stopped for a lunch break and had traditional brotwursts. Interestingly, while in the US sausages are served in a bun, in Switzerland they would give you the sausage and a piece of bread instead. Afterwards, we walked around to the castle. The power of the Rhine Falls is harnessed and used to generate electricity. In the late 1800s, an aluminum plant harnessed the power of the Falls.

Lunch and a great view of the Rhine Falls. *

Historically how the power of the Falls was harnessed for electricity. *

We explored the exhibits inside of the Castle. Many famous and up-and-coming artists have painted impressions of the Falls. Since ancient history, the Rhine Falls have been a popular tourist attraction because people have wanted to see the Falls up close and hear the roar. One king travelled with 700 subjects just to visit and see the Falls. The Rhine Falls are apparently the most painted and written about subject. We were also able to walk into a lookout that brough us right above the Falls. We felt the spray and the roar was so loud!!! It was difficult to have any conversation and just become entranced and amazed at the fast-paced flow of the frothy waters. It was also a little frightening to imagine what would happen if someone fell in!

Going into the castle!

Classical view of the Falls from the Castle. We went back by train and explored Schaffhausen. The iconic features of buildings here are window seats on the second floor facing the street that allow one to sit and observe passerbyers. The houses hadwall paintings and the medival looking streets were adorned with fancy clocks and drinking fountains. There was a church that also served as a monastery which was really impressive.Also, the beer “Falken” is a specialty of the town. We ate a hearty dinner: we had two apertifs of bruschetta and beef tartar. I cannot believe I ate raw meat but it was extremely delicious! I wonder how the chefs prepared it. The beef tartar also had a raw egg yok in the middle of it. Then, I had a seafood soup and for the entree, I had a veal escalope.

Veal escalope apertif. After we said goodbye and thank you to Georg and took the train back to Zurich, we went out for drinks at a popular bar and then stopped by an Italian restaurant for a midnight pasta dinner.