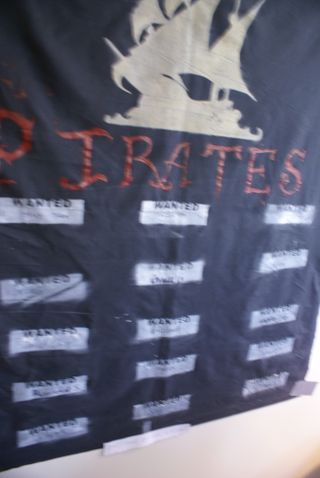 Ever wanted to be a member of the CIA or KGB? Do you like PIRATES? Or maybe you prefer anime.

No? Then how about being a Pokemon master? Part of the U.S. army? Indiana Jones? Or what about X-men characters? Still not yet? Dumbledore’s Army? Covert ops? Do you like spandex? (please say no to the last one…) Or how about just having a day of ridiculous fun? Yup. It finally happened. Ditch Day. You know, we’ve been hearing “Go to bed frosh! Ditch Day is Tomorrow!” pretty much all year, but we always laugh it off, knowing “Yea right. Like it’s gonna happen.” But then, we started noticing things. Black tarp started appearing around campus. We hear faint hammering sounds in the night. And ever so often..seniors disappear for days on end. What’s going on? Yup, that’s Ditch Day. Me? I joined the pirates stack (too bad no ninjas…) First we started off with…a math set? Yea. We got tricked. Behind the large sign for Pirates Cove…was a sign for Business World Stack. To master our “accounting” skills, we sat there for an hour doing integrals, adding numbers, dividing numbers….at 8 in the morning. While eating breakfast. But it’s ok! We had to deliver our completed assignment to the head of our company, and ended up being chased by the FBI for fraud charges. In doing so, we got locked in this auditorium, with a suitcase, a padlock, and a laptop. The seniors programmed this game filled with clues/puzzles that would tell us the combination of the padlock to the suitcase and the padlock to the doors, to escape from the FBI.

At this time, we learned some people had some pretty shady skills. One of the guys on our stack apparently knows how to open a master lock without knowing the combo beforehand (and no, he didn’t break it). So yea. Escaping the FBI, we “realized” that we pirates aren’t good businessmen, and decided to go back to our traditional jobs (YAR!) and navigate the seas. Then…that’s when we found out we weren’t pirates of a ship, but of a SPACE SHIP!. (What the heck. So confused. I still don’t get this). We were led to an underground room filled with LEDs. There were white ones, red ones and a single blue one. We also happened to have a custom-built master control of the entire set up. You know the game where you click on a button, and then it turns off the one you clicked, but turns on the ones around it? We had that game. Except with over 100 LEDs. And they turned off in random groups. (Seniors are cruel…) But after about an hour of messing around with it, we turned off all the RED LEDs, and the single blue LED lit up. But what now? After a couple of seconds, another set of lights turned on, but they spelled a message (took us an hour to figure out it was a message in the lights…) leading us to our next location.

LEDs make some pretty cool effects with the right camera settings :P Where we created our FLAG! Our pirate ship was sorely lacking in decor, so with some spraypaint, black fabric, and a couple of poles, we got ourselves a nice looking war banner.

To wrap it up, after getting our flag, eating a quick meal (exotic fruits!)

(Jackfruits, durian, coconuts, kiwis, pineapples, papaya, guava, you name it!), we set out for the lake. Across the park, there were “shipwrecks,” where we had to salvage pieces of wood to create three pirate ships, arm it with a cannon, and make our own cannonballs (water balloons). We were pitted against another stack who also managed to “find” three ships, and attempted a full out battle on the lake. But…the lifeguards wouldn’t let us board our ships…

So we had a water balloon fight. All in all, not too bad, eh? The picnic afterward was pretty good, but the park closed down while we were BBQing. We ended up being chased out by park security. Can’t wait for next year!