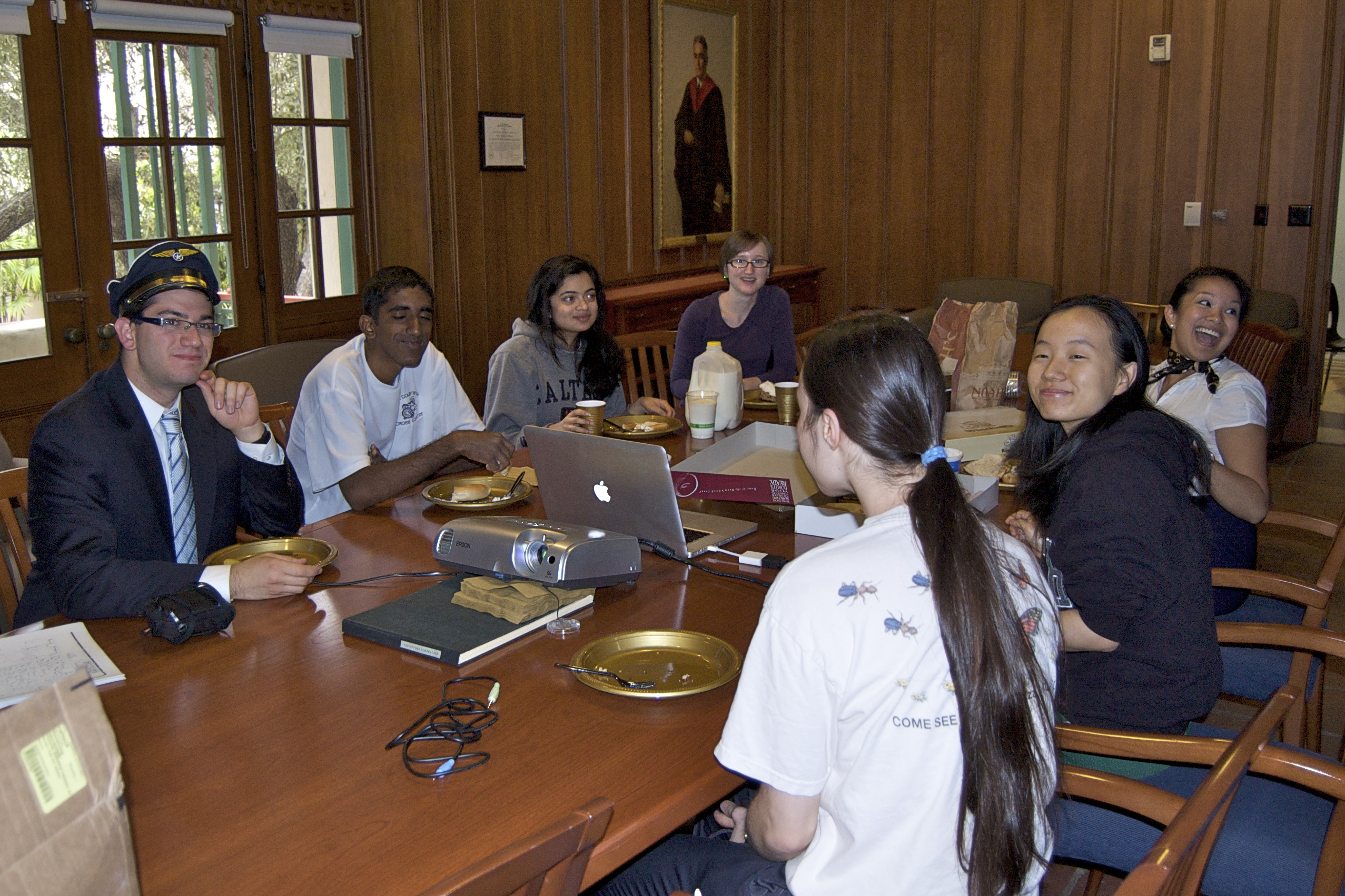 So began my day last Friday, the 21st. For all the dramatic lead-up, fakes, and preparation, the real day was upon us! Dannah and I had prepped incessantly for the last few weeks (especially in the one leading up to Ditch Day, in true Techer fashion), and finally all of our work was about to come to fruition!

So what was our stack, you ask? Jetsetters! Think of it as a cross between around-the-world and high-class traveling. Hopefully you’ll get a feel for what it was like to be a Jetsetter on Ditch Day, and see all the exciting things we had planned for them!

Breakfast:No honest Jetsetters would fly on an empty stomach, so we fed them with a “gourmet” spread of bagels, donuts, and fruit! Dannah and I also dressed the part - as I was the pilot for the day, and Dannah was the flight service coordinator!

Luggage Packing: Well, you can’t go anywhere unless you pack your bags! We had the Jetsetters hunt for items on their packing list (ranging from little things like soap to big-ticket items like cell phones) on one of the lawns on campus. We made it a race between the two teams. Unfortunately, we were unable to watch because I was making passports and Dannah was prepping the next task, but they were speedy and packed their duffel bags with time to spare!

Seat Change!:If you’ve done lots of traveling, you have definitely encountered some of the troubles resulting from aircraft changes - seats moving around, gate agents being unhelpful. The same goes for our Jetsetters! They had to figure out where their new seats were going to be by playing a game kind of like Mastermind! See the rules for the board game version here if you’re not familiar with it.

Trip to Athens:The Jetsetters’ first flight brought them to the land of Greece, where they were fortunate enough to meet up with our very own Zeus! “Greece” in this case was the Admissions Office, and “Zeus” was our trusty assistant director Cameron Pinckney. We gave him his props, and apparently he was really into helping out with our stack! These pictures definitely show that.

[These photos courtesy of Christine Waldor of Caltech Admissions]

Gambling: What Jetsetter doesn’t like to play the high-stakes casino games in Monte Carlo? As a result, we had our group play “Super Jackpot Party: Jetsetters Edition” where they had to win enough money for their next plane ticket. To do so, they had to flip over cards that told them different activities to do - anything from spinning the “wheel of fortune” to playing blackjack! Somehow our group had such amazing luck we had to push the price of their ticket higher to keep them playing longer! No one minded, though, because it was such a fun time.

Lunch:As with most other stacks, we had lunch with the rest of campus at Tom Mannion’s house - they had a grill going with burgers, hot dogs, and steaks! It was delicious, but no rest for the weary - we had to set up the next task!

Breaking the Ice: Another setback with air travel can be that your flight gets canceled or diverted! In our case, the Jetsetters were sent to Switzerland as opposed to Tokyo - this meant that they had to break their next clue out of three blocks of ice. It was a pretty imposing order, but they were game, and had some really great techniques for getting it out!

Traffic: If you look at Dannah’s post, you can see how we set up boxes to look like a traffic jam in Tokyo. The premise was to have the Jetsetters break out their limo from the pack, and under their limo (the black car) they would find their next clue. This is another place where they showed their smarts - they were done half an hour early! That wasn’t really that much of an issue with our timing, though, because they had…

Afternoon Lounge: To chill out for a bit indoors, the Jetsetters had some more snacks and refreshments set up for them in another one of Caltech’s wood-paneled rooms! Yum!

Acapulco: Utilizing another one of our Caltech contacts, we had our Physics TA, Richard Norte, help us out by wearing a sombrero and saying “hola” to our Jetsetters! They got to check out Cahill, one of the newer buildings on campus, and got some rafts for their indeterminate next task… (dramatic!).

Save the Market: Their next flight brought them to Bangkok, Thailand (the pool), and they had to save the floating market there! Some of the merchandise fell into the river, and they had to dive down (and use their rafts) to save it. Fortunately, they were all prepared to get wet, and enjoyed the relaxation by the pool.

[These photos courtesy of Beth Harnick-Shapiro of Caltech PR]

Balloon Party: The FINAL task was to go to one of the rooms in the Student Activity Center (SAC) underneath the South Houses, and pop their way through the balloons to find mini-puzzles.

These word searches, sudokus, and other puzzles gave them their final confirmation code, which was a password to the e-mail account jetsetters.the.stack@gmail.com. Their final boarding pass was informing them of a multicultural dinner back where we began - Dabney Treasure Room!

So, there you have it - Ditch Day in a nutshell. We were really satisfied with how everything turned out, and our Jetsetters seemed to have a great day! Thanks to them for being great, thanks to everyone from administration who helped us along they way, and of course thanks to Dannah for making the planning go so awesomely! Now that I’m a “ghost” - as after Ditch Day the juniors become seniors and the seniors become ghosts (that limbo between seniors and alumni), it really signals that our time here is almost done! Bittersweet, but satisfying.