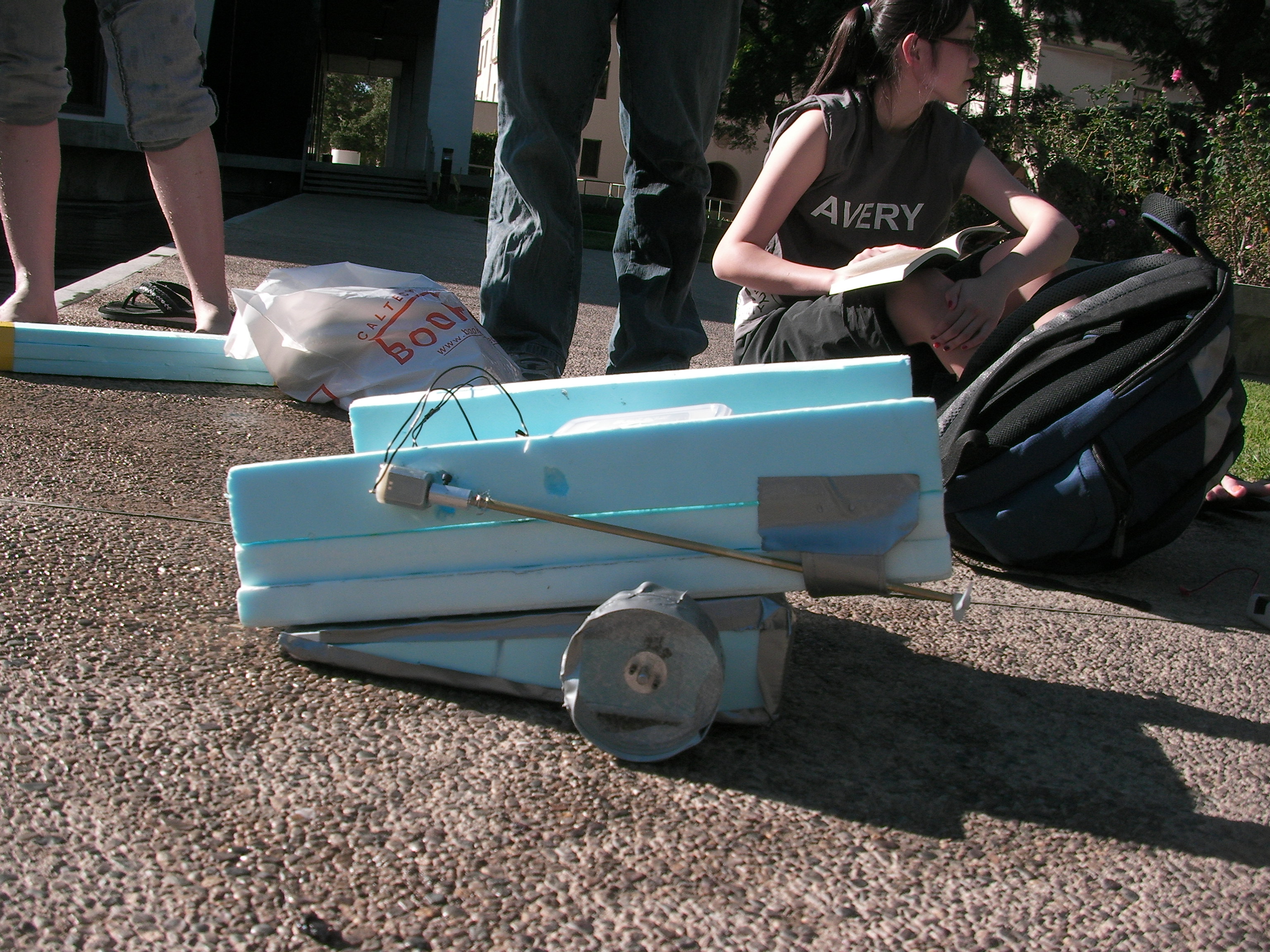 Do you have a piece of cloth you don't want to keep dry?

This is it. The last day we had to be in the shop before our first deadline next Tuesday. Did we complete everything in time…

YES! Everything that needs to be machined is completed, but not after a lot of sweat, tears, and duct tape! It all began (ended?) Wednesday night. Though the shop was open until 7pm, I still had to abandon Will and go to basketball practice at 3:30. So, I was not present when she had a breakthrough. Before I left, I promised her that I would come in at 8am Thursday morning to work on building the “foam base” for Hateful. We were both super stressed because we still had to build the body of the robot and make the plastic wheels into paddle wheels and create the rubber tires. All of this in 2 days?!? It seemed impossible (and it probably was). I was exhausted with the thought of spending my Thursday morning before class working with giant pieces of foam, trying to shape them into a body for Hateful. I had already miscalculated the time this task would take. I spent almost the entire time in the shop on Wednesday cutting foam with a piece of hot wire, and then trying to glue it together with the hot glue gun. The obvious problem: if the hot wire easily cuts through and melts the foam, so does the hot glue from the gun. As I was trying to meld 2 pieces of foam together, instead the hot glue was melting through both pieces, and not to mention causing an awful smell! However, once you get the hang of it, and figure out a technique, it works really well. The hot glue combined with the foam creates the perfect waterproof seal for a floating boat! But by the time I was on a roll, it was time to stop and go to practice. To make up for lost time, I was going to roll myself out of bed and get into the shop early the next morning.

While I was busy worrying about Thursday’s basketball game against LaVerne and surviving through another day of practice, Will was in the shop solving our impossible task of meeting our deadline. By the time I got out of practice, I grabbed dinner, and ran to my 7 o’clock class. I didn’t get back to my dorm room until 9:30, at which time I quickly began hammering away at my ACM set that was due today (Friday). I knew I would be gone from 4:00 - 11:00pm at the basketball game, and so I would not have the time or energy to complete the entire set. By midnight, I hopped into my bed, when I looked at my phone to set my alarm and saw “1 missed call.” It was from Will, and she left a message in which she sounded super excited and said that we were almost done. ALMOST DONE?!?! How is that possible, There is no way that she would be able to make paddle wheels and rubber tires and a base in 3 hours…maybe she was so sleep deprived that she was hallucinating. I decided to wait until Thursday morning to find out.

Thursday morning came around, and I called the shop to see if it was open, but no one picked up the phone, which usually means no one is there (however, the Shop Instructor said he was there…oh well). I met up with Will in ME 18, during which she quickly described her breakthrough to me. First, we attach all of the electronics to the top base and then create a foam shell around it (instead of creating a foam base with a hard top) and then just revive Hungry. That way, on Tuesday we could just put Hungry on top of Hateful. Drive Hateful into the water, and then Hungry swims off of Hateful and across the pond. That way, Hateful doesn’t need to be able to swim. It just needs to drive into the water from the ledge! So we were almost done! I wanted to get into the shop and start right away…and lucky me, the shop was open during lunch! So, I spent my lunch hour in the shop taking a bite of food, and then measuring the holes, bite of food, drill the holes, bite of food, counter bore the holes…etc. By the time I had to leave for the basketball game we were done with all the machining we had to do! We did not need to go into the shop at all on Friday! However I had to gather everything and take it back to my room. Will hadn’t started the ACM homework yet, and she was going to be swamped tonight, so I agreed to work on all of the soldering and arranging of the electronics for both robots over the night. I trekked back to Avery with my school bag, a bag filled with various electronics and materials, and a robot in each hand. People gave me awkward/interested stares all the way back. One person even stopped me to ask what I was doing. All I have to say is “ME 72” and they know instantly. I did not return from the game until 10:45 last night, and I still had to do one more problem on my ACM set. This, combined with helping others and re-copying my set so that it was neat enough to read and easy to follow, took me until 1:45am! By then, I knew I was in no state to solder. I burn myself when I am awake and alert! No need to risk it when I am half asleep and exhausted.

So, I woke up early this morning, and got right to work. I soldered all of the electronics, placed the base in the shell and tested Hateful out in the hallway. The first (and only) problem I faced was that the size of the foam shell was designed based on the fact that our wheels were going to have a 2 inch radius. However, this included the .25 inch added thickness from the rubber tires. Right now, our wheels were bare and therefore with their 1.75 inch radius they were just even with the foam. When the wheels spun, since they were not completely resting on the ground, it was hard for them to grip the carpet and move the robot. I spent the next 30 minutes working with the exacto knife to make the foam base smaller. As I stood over the trash can, with little piece of foam flying around me, my House mates started to leave for class, stopping to gaze questioningly and ask “what are *you doing?!?“*After I completed everything, I decided to drive Hateful around the halls and the lounge. It was really fun, and started drawing people out of their rooms. However, I looked at the time and realized I was still in my pjs and had to get ready from my 11am class. After lunch, we gathered the 2 robots and took them down to Millikan Pond to test our amphibious entry. First, the wheels had trouble gripping on the stone/concrete ground. So, we pulled out the Duct Tape! We put several wraps around each wheel, until they were thick enough to contact the ground. After that, I drove Hateful straight off the ledge into the pond…and it flipped completely over! OH NO! New plan…drive in backwards…maybe that would prevent such a disaster! That work out a little better, but it was still sloppy. After that, we put Hungry on top of Hateful and attempted to drive them in together…ya…that didn’t go so well. Hateful splashed into the water, and then Hungry was still stuck on top. We continued to do testing until we knew exactly what the plan was for the weekend. After the crazy water entries, we had to open up Hateful to make sure that any water that leaked in was emptied. While there was a little bit of water, we need to make sure that our electronics were still completely dry and that our motors were able to dry. I looked around for something to wipe the water off, and when nothing came to mind, I asked Will…do you happen to have a piece of cloth you don’t want to keep dry?…turns out her jacket makes a perfect water absorber! Now, I am sitting in my room, with my 2 robots…once again trying to accomplish things before basketball practice (which is in an hour). Will just left to go home for the long weekend, and I am going to spend some extra time re-soldering things, fixing the foam base…etc. Monday will be spent practicing our entry and remote control skills, and then Tuesday is the deadline!