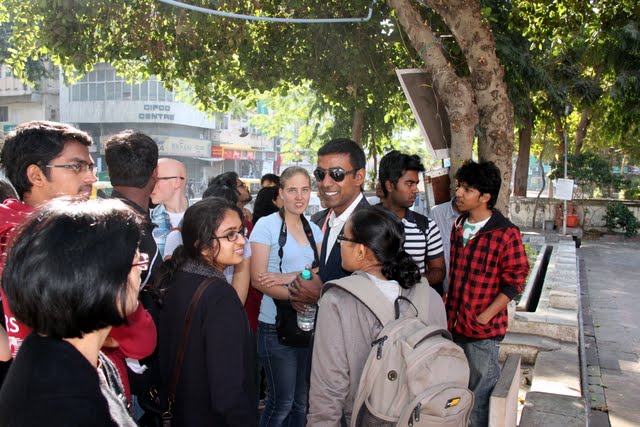 On Being a Tourist and Celebrity in India

As a special treat, on the third day we got to wake up extra early to get prepped for a historical tour around the city of Ahmedabad. One of the coolest things about this city is that even the hundreds-of-years-old houses are still inhabited by real people. So, our historical walk was literally a walk around the partly residential the center of Ahmedabad, which is a stark agglomeration of the old and the new, the industrial mixed with the ancient.

Here we all are hangin’ out barefoot at the mosque. There were far too many group photos taken over the course of this trip. Welcome to India.

As we continued on in our tour, we traveled to a second mosque, a Jain temple (Jainism is a religion that is similar to Hinduism but involves dietary restrictions that include lacto-vegetarianism and prohibit eating root vegetables among other things), and, finally, a stepwell. It would be pretty difficult to do this last location justice by written word alone, but I’mma try (and also include a pic in case I fail).

A stepwell is pretty much exactly what it sounds like: a resevoir that has a long set of stairs leading down to the water level. The idea behind it is to allow easy access to water no matter how much or how little there is. Since this trip was kind of a big deal, we weren’t taken to just any plain old stepwell. This one had rows and rows of covered platforms, which were meant to be used by travelers who needed a place to sleep. To get to each successive platform one had to shimmy across ledges that overlooked the decending staircase. Eli and I are pretty much the bravest people in the world, so we decided to go from one side of the well to the other via ledges (don’t worry, we both made it out okay). We hung around there for a little longer before finally hittin’ up some grub.

Action shot of me shoveling food into my mouth. For the second half of the day we had a lecture by Michel Danino, a French author and historian who moved to India decades ago. He now mainly studies the Harappan civilization, which is an ancient group that was highly technologically advanced and most famously were the architects of the sites at Harappa and Mohenjo-daro. There were two major messages that I took away from this lecture:

As these kids try to touch us, take pictures with us, and find out where we’re from, Michel Danino looks away in disgust. Sherin’s presentation once we returned to IITGN was one of my favorite of the entire trip. It centered around tribal practices in India, exposing the cultures of the peoples indigenous to the land. What made it so fascinating was that I had no clue that India had its own set of “natives” that were quite different than the “civilized” portion of the country. A complex hierarchy exists to define clan, tribe, etc., but practices are largely based on totemism, or the relationship that a tribe believes exists between itself and an animate or inanimate object. For instance, the Mahua’s view themselves as part Mahua tree. So every house has a Mahua tree out back, of which every part is used for shelter, food, and other essentials. Perhaps most fascinating is the fact that there is still a cannibalistic tribe active in the forested area of a certain island…and that island also happens to be a very popular resort in India.

I was far too tired for the last lecture of the day (the first half of Michel Danino’s overview of science and technology in ancient India) and floated in and out of consciousness. Only the promise of an incredible dinner at the restaurant Vishala was capable of rousing me.

Of course, this ended up being another delicious Indian meal, but we also got a chance to watch Mallika Sarabhai’s theater troupe rehearse a play about the life of Tagore, a Bengali nobel laureate in literature and an all-around renaissance man and swell guy. It was altogether a thrilling affair and a satisfying end to the day.

Oh yeah, we were also written about in a newspaper that day, but that’s no big deal. When you’re a foreigner in India you’re pretty much famous, anyway.

Thanks to Jaison Manjaly and Margaret Chiu for photographs.