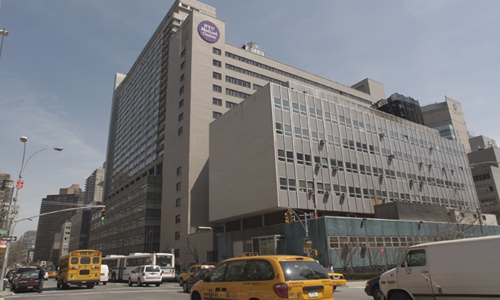 Hello! Today I just made my way back from the NYU Langone School of Medicine, located in theeast side of Manhattan overlooking the East River. My host’s apartment was at 1st and 26th, which basically means there’s plenty to do no matter which direction you turn. Not to mention the medical school and associated hospitals (including the famous Bellevue Hospital) are just a few blocks away: definitely a plus in the midst of an East Coast blizzard!

One thing that really blew me away during the tour was the new simulation center, which cost $20.8 million to build but it definitely worth it. When we entered the center from the elevator, the first thing that we noticed was how newit was: from the spotless walls down to that fresh “new car” smell. There are over a dozen robotic mannequins, each costing between $15k-250k, which allow students to show their stuff in an emergency medicine environment that is as realistic as possible. They can perspire; they have a blood pressure; you can administer CPR. . . the works. One even gives birth! Also, they videotape everything so that students can look over their reactions later and say,

“Ouch. I probably should have done that better. . . I’ll fix it next time!”

“Wow, I really nailed that! I look like a real doctor!”