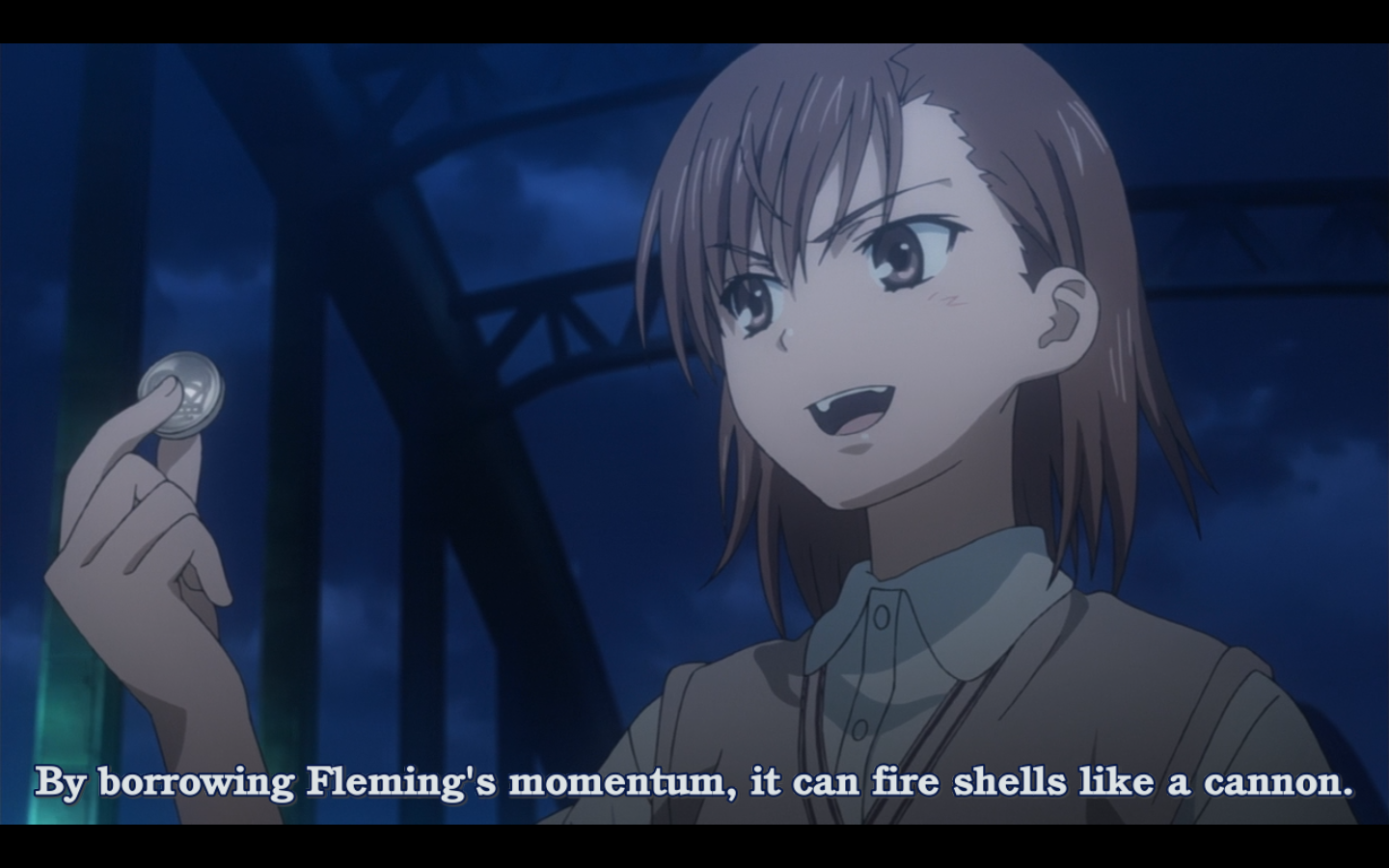 Hi Alls,If any of you readers are familiar with A Certain Scientific Analysis from MIThttps://anime.scripts.mit.edu/miteiru/a-certain-scientific-analysis/you’ll know about Misaka’s railgun and the realistic numbers that go into analyzing it. If you’re unfamiliar, I highly recommend reading it. It’s quite an interesting read even for people who don’t follow Anime so much.

MIT’s analysis is of fair depth and accuracy however, there is special meaning in having Caltech analyze it instead. Caltech provides a great context in which to understand the phenomenon of “Fleming’s Momentum”, letting even an average person fire railguns from their fingertips without the use of psychic abilities.

Picture of Misaka describing her railgun. Clearly, the most essential part of firing your own railgun is to use the power of Fleming’s momentum. But what is this mysterious source of power?Well to any Caltech Undergraduate, it’s obvious that Fleming’s momentum is simply the endless source of muscular power and fitness that emanates from Fleming House (1 of 8 undergraduate student houses). It’s no surprise then that someone of Misaka’s stature needs to tap into such a source of energy to fire coins at roughly 1000m/s.Better yet, the anime draws an analogy to firing a cannon. Again to any Caltech Undergraduate, it’s obvious Fleming House is essential. The reason it can fire shells like a cannon is because it borrows power from Fleming House’s cannon.

Fleming’s Cannon.This mechanical contraption is driven purely by the power of a house of Flems (Members of Fleming House) hurling cannonballs. Just imagine the destruction that could be caused by the same power hurling quarters instead! Well, don’t just imagine it, try it yourself. To do so, simply apply to Caltech, commit, and borrow Fleming’s momentum. Everyone on campus has their very own personalized railgun! That’s a promise.

Well, maybe not so much. There might be a fib or two up there. In fact, the actual reason the writer used “Fleming’s Momentum” was because of John Ambrose Fleming and his left/right hand rules.https://en.wikipedia.org/wiki/Fleming%27s_left-hand_rule_for_motors More importantly, his “Beginner’s Guide to Firing Railguns” describes the proper implementation of railguns.

Simply make sure align your firing hand into the posture described above. For further details, buy the book (only $19.99 on Konozama)