Little Tokyo was established in the late 1800s, and has some businesses, including a mochi confectionery called Fugetsu-Do that was established in 1903. Most of the businesses are significantly newer, including my friend group’s favorites: Kinokuniya, a bookstore; Kouraku, a restaurant with very reasonable prices; Midori Matcha, a matcha dessert shop; and Rice and Nori, an onigiri store.

For those with cars, Little Tokyo is a 20 minute drive (without traffic) or a 30 minute drive (with traffic) from Caltech. However, it’s also accessible by Metro, as there’s a stop along the Red Line right outside of Little Tokyo. At the time of this blog post, the stop is closed, as the station itself is being reconnected, but there’s currently shuttles that bring people to Little Tokyo from the next closest station. Also, the Uber/Lyft prices aren’t too bad to get into the city.

Typically, a trip to Little Tokyo involves a meal, a stop to browse at Kinokuniya and the anime shop downstairs, picking up some snacks at Marukai Market, and some type of dessert. Usually, it’s about a half day’s worth of activity.

On my friends’ and my most recent trip, we stopped by Kouraku for lunch. I would highly recommend the katsu curry rice– It’s a favorite of ours! Right across the street from Kouraku, there’s a small but dense shopping plaza. There’s some restaurants, anime character goods shops, bakeries, dessert shops, and even a retro game store. My friends and I like to stop by Nijiya supermarket for snacks, including onigiri.

Afterwards, we went to Somi Somi, an ice cream shop for dessert. There’s many Somi Somi locations around 626/SGV by now, including at Glendale and Koreatown, so I wouldn’t say it’s a must-try food in Little Tokyo. That said, it’s consistently good, and the rotating flavors keep it interesting. The flavors when we went were milk tea, strawberry, milk, and ube.

We also stopped by Kinokuniya to browse. The bookstore offers manga, both in English and Japanese; novels, also in both languages; and plenty of stationery. Even when I don’t plan to buy anything, it’s always fun to browse around. For anyone who likes calligraphy: Kino has a lot of nice pens, and carries fountain pens and ink as well. 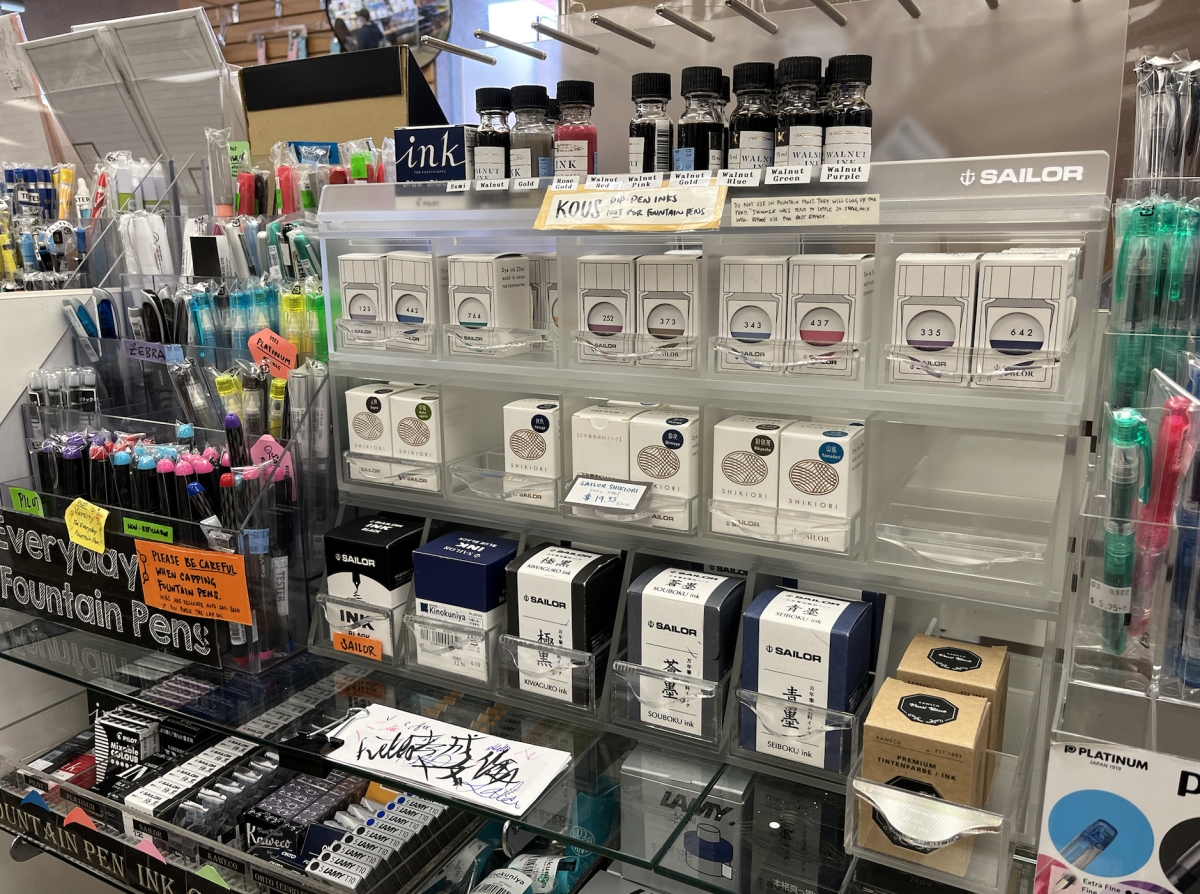 Before ending the day, we made a final stop at Marukai Market. Both Nijiya and Marukai sell onigiri, so we decided to taste test the onigiri to compare against each other. However, the test reached inconclusive results. The onigiri was too good, and we didn’t end up focusing on comparing them, but rather just enjoying the taste.

I’d say that the above scenario is nearly an ideal itinerary for a trip to Little Tokyo. However, for a dessert that feels a bit more Japanese, I’d recommend Midori Matcha. They have matcha and hojicha desserts and drinks, and personally, I really enjoy their hojicha ice cream!