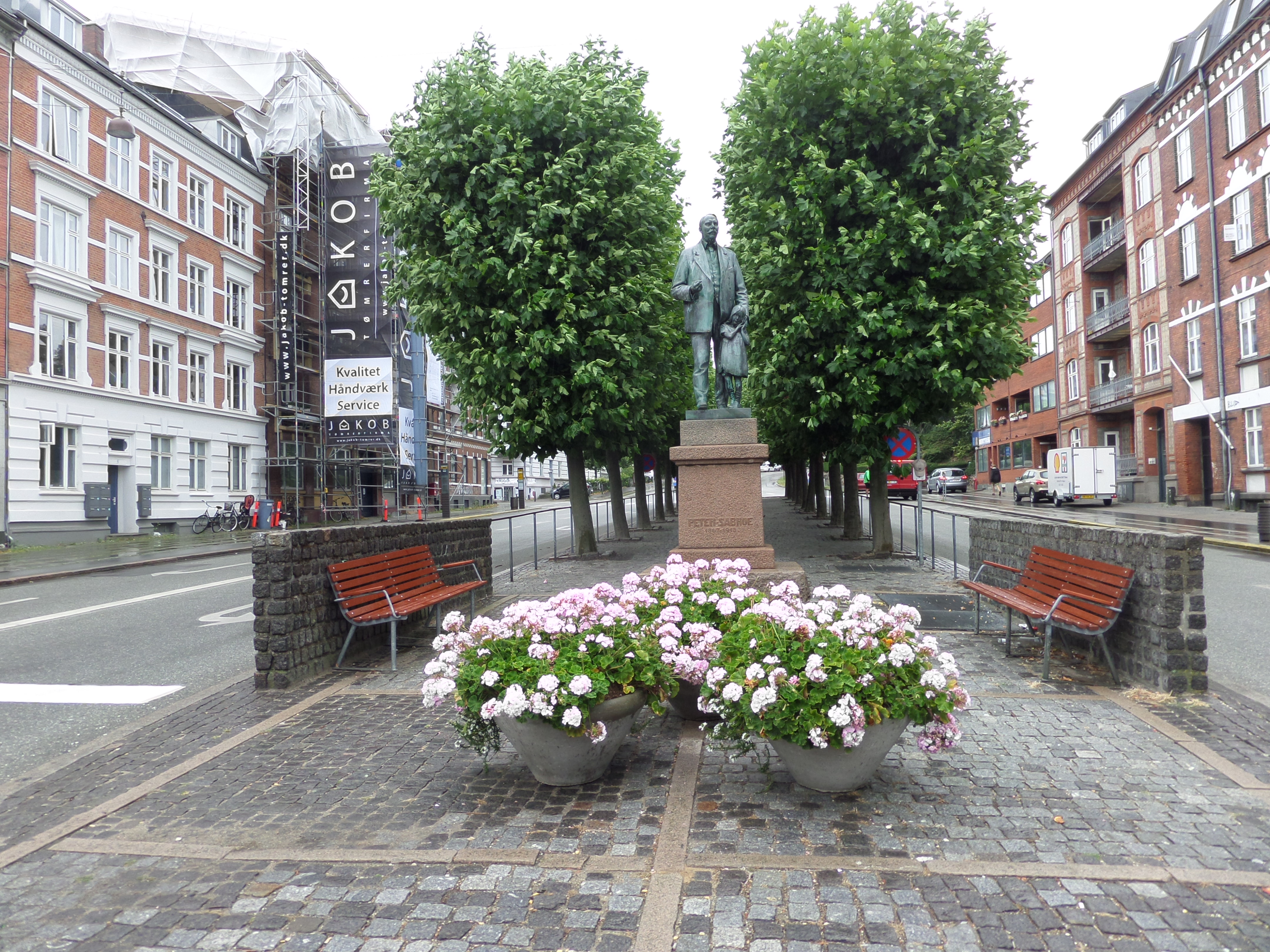 En dag i Århus [A Day in Århus]

On Saturday, my classmates and I begrudgingly dragged ourselves out of our warm beds and into the cold, cruel world to see the beautiful port city of Århus. Well, that’s being a bit dramatic: it was cool enough to justify wearing a sweatshirt, and it rained a bit (okay, a lot) on and off, but it was certainly not cold and only slightly cruel. And we even got to sleep in for an extra hour, as the bus didn’t leave the hotel until 9:30! As per usual, I promptly fell asleep on the bus; but when I awoke, I was greeted by modern skyscrapers intermingling with thousand-year-old architecture. Århus has been inhabited since at least the 8th century, and has been a center for shipping since the 1800s, making it a city bursting with history (most of which, I’ll admit, I don’t know).

A statue of Peter Sabroe (1867 — 1913), Danish journalist, politician, and children’s rights activist. Yes, I looked that up on Wikipedia before I posted this.

We started the day with a walking tour of the city, given by one of our Danish teachers, Henrik. We first stopped at an interesting “Vinyl Café” to grab some much-needed caffeine. Then we saw one of the oldest streets in Århus, running along the harbor; the Latin quarter, where Henrik used to own the oldest vegetarian restaurant in the city; the cathedral that marks the center of the city; and the river walk, where all the night life happens.

Conveniently, the way to the Latin Quarter is labeled “Latin”.

Århus River, with the cathedral peeking out from behind the buildings.

After the tour, we went to the ARoS museum of modern art. I’m not a huge fan of modern art, but the museum was pretty amazing. On top is a large circular walkway with brightly colored windows aptly named the “Rainbow Panorama” — from it we saw all of Århus in every color imaginable.

Unfortunately, due to the rain, we couldn’t get onto the balcony below the Panorama.

The inside of the museum was no less impressive. One of the exhibits, Out of the Darkness, featured a sequence of rooms that get progressively lighter and more colorful (the first room was almost pitch black, but the second-to-last was as bright as a summer’s day), ending in a rainbow smoke-filled room. It was lit with lights of all different colors, much like the panorama, but filled with dense smoke so that we could only see at most a meter in front of us. As we wandered around through the rainbow, we would see people emerge from colorful nothing directly in front of us and disappear just as quickly.

We’re not allowed to take pictures inside Out of the Darkness, but here’s one of the banner for it.

Other exhibits included “Wes Lang — The Studio”, where an artist (unsurprisingly named Wes Lang… although interestingly enough, a Los Angeles native) makes giant sketches of his musings and displays them for everyone to see; and “The 9 Spaces”, which featured (you guessed it!) 9 different rooms, each designed to create a unique sensory impression on the viewer. There were many more awesome exhibits, but those were the ones whose names I remember.

At 17:30, our bus was slated to leave Århus and take us back to Grenå; however, we had the option to stay as long as we wanted, given that we made it back to the hotel for class on Monday morning. Seeing as Århus is not particularly close to where I’ll be staying near København, I figured I’d take the time to see more of the city, and a couple others elected to stay with me as well. We agreed to take back the latest bus that night to avoid having to find and pay for a hostel to sleep at, and waved goodbye as everyone else went home.

We spent most of our time just wandering the city. We walked to the harbor, but quickly realized there wasn’t really anything interesting to see there unless you really like shipping boats. So we turned back and meandered through the city. Along the way, we walked through a beautiful cemetery that makes even the most beautiful cemeteries in the US look downright industrial: here there were vibrant trees and flower bushes lining every grave, well-kept lawns with benches to sit on and enjoy the view from the top of the hill, and each gravestone was thoughtful and unique. Eventually we ran into Århus Universitet, the largest university in Denmark. We explored part of it, but quickly realized we were quite hungry, so decided to head back to the city center.

Walking through the cemetery.

By this time, we were clear on the other side of the city; but earlier in the morning, Henrik had suggested that we try one of a couple restaurants back in the Latin quarter, so we obediently plodded back through town to find them. It took us about an hour to find them, so by then we were (figuratively, of course) starving. However, both the restaurants’ cheapest meals were DKK 250 (€33.50/$44.80), and we did not particularly want to pay that much, so we sucked it up a bit longer and went off in search of a cheaper place.

Luckily, we soon found a cute little restaurant that featured a generous bowl of mussels for DKK 60 (A much more reasonable €8.05/$10.75) and fish and chips for DKK 55. I’m not a big fan of mussels, so I got the fish and chips. They were perfect: greasy, flaky, and more than I could eat.

Inside Waxies Satiated, we decided to check out pub along the riverfront called Waxies that had free live music every night. Once inside, we bought ourselves a Carlsberg each (the local favorite) and grabbed a spot at the bar to enjoy the entertainment. On this particular night, it a one-man band who used a synthesizer to play classics like Wonderwall and Iris along with Danish rock songs.

Unfortunately, we had a bus to catch, so we couldn’t stay all night. As sad as we were to say goodbye to Århus, we were exhausted from our adventure, so we didn’t grumble too much as we settled into our seats on the bus. And of course, I immediately fell asleep for the ride back to Grenå.