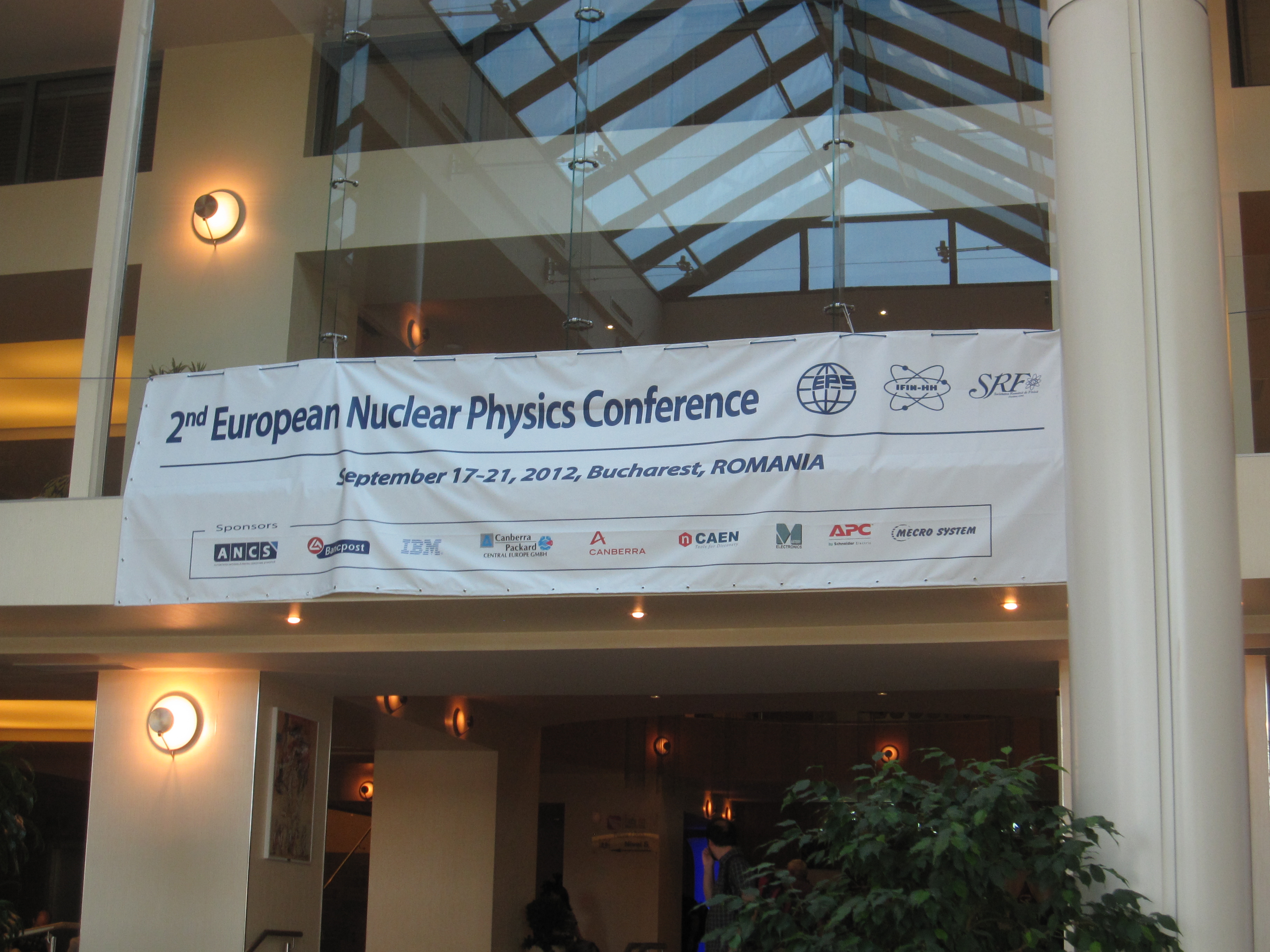 So I am currently finishing my last night in Bucharest and in Europe in general. Finally after 13 weeks I will be returning to the US.

This week I have been attending the European Nuclear Physics Conference here in Bucharest, Romania. It has been pretty cool getting to sit in on presentations on nuclear and hadronic physics and see applications ranging from medecine to astrophysics. It has also been fun since we have had the chance to meet people from all over the world, not just Europe. We had coffee the other day with a German post-doc who is working at the Unversity of Chapel Hill, North Carolina and a nuclear physicist from Iran. We have met people from Germany, the UK, the Netherlands, France, Russia, Ukraine, Poland, Spain, Italy, Portugal, Romania, … and the list goes on. I actually met this guy from France on the elevator who was incredibly excited to see that I was French and kept on running up to me at different times during the conference to talk to say hi.

Being in Romania has been an exciting experience in itself as well. Neither of us can speak or read the language so leaving the hotel is kind of difficult. During our lunch break we’ve been walking across the street to the mall to see what Romanian stores are like. The US dollar is about 4 Romanian lei and we’ve pretty much found that everything produced in Romania is incredibly cheap, for instance 1kg of apples for 1 lei or a full sized watermelon for 1.5 lei, basically between 25 and 50 cents. Foreign goods mainly retain their value but anyways, it’s fun to see what is for sale in Romania.

On Wednesday we took one of the conference’s planned excursions for a tour of Bucharest. We saw the Parliament building, which is apparently the 2nd largest building in the world, as well as a Romanian village museum, the Plaza of the Patriarchy and the old downtown. The Parliament building was spectacular and huge. We were in a small group of six, just including ourselves, the French guys I met, a Dutch nurse living in the UK and two Russians. The building’s key feautures were the chandeliers and it was somewhat amusing since our guide tried asking us to guess the weight of one of the chandeliers which looked about the size of two cars. The older Russian physicist looked at it and just said 5 tons which shocked the guide since it was right, then the Russian continued along the tour guessing correctly the weight of every single chandelier. Turns out nuclear physicists are indeed experienced with crystals, at least the Russians. :)

The village museum was really cool since they actually moved houses from all over Romania to the museum so you could see the architecture from all over. Our guide was also very knowledgeable so we were able to ask about most of Romanian history and culture.

Today was our last day, so after sitting through the morning plenary sessions we went to take a tour of IFIN-HH, the nuclear physics research facility in Bucharest. Unfortunately I don’t have many photos of it for you, since we couldn’t really take anything in due to security with the active reactor and all of that stuff. It was pretty neat getting the experience of getting clearance to see the Romanian nuclear facility, and don’t worry, the French guy had run back to get his geiger monitor before the tour.

Anyways, this has been a pretty fun summer here in Europe and an interesting experience in Bucharest. I’ve had the chance to learn a decent amount of physics and meet some colorful characters. We just got back from the final banquet which was incredibly formally decorated, though the physicists were not. The food was awesome and keeping to what we saw of European physicists at CERN, there was obviously a dance party. It’s not everyday that you get to see a bunch of 30-80 year old physicists from Russia to the UK on the dance floor.

Tomorrow I start my long voyage back to the States!