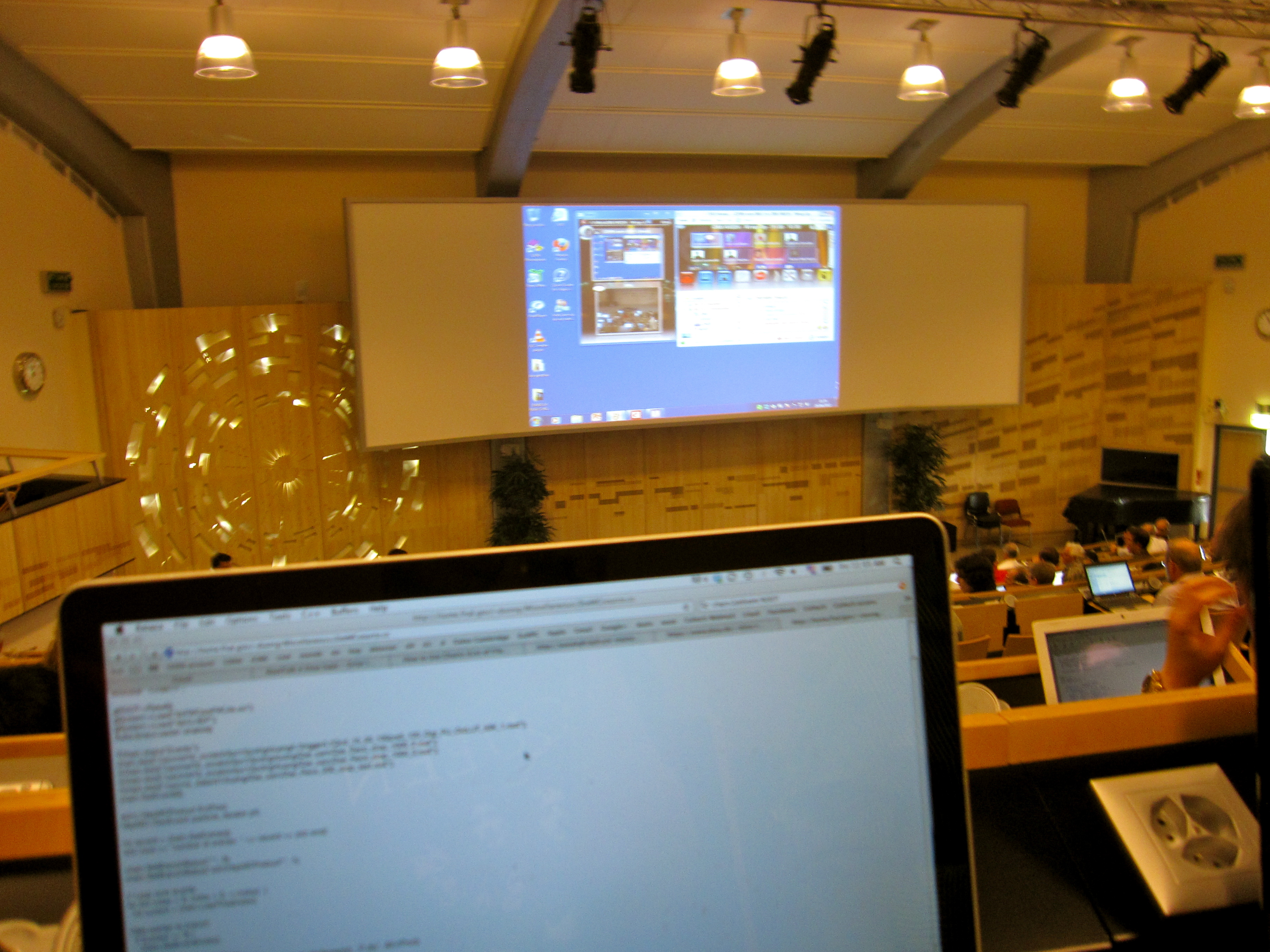 I am pretty excited to say that I have finished my first week here at CERN. I spent most of this week filling out paperwork, attending meetings and trying to write my code (emphasis on the “trying”). CERN uses a programming language called ROOT which is based somewhat off of C++ and was created for physicists. As everyone here is quick to proclaim, nobody knows how to use ROOT. It’s somewhat of a challenge seeing that only particle physicists use it and every time you google anything about it you only find websites about gardening, but that’s what we’re here for. So basically my job this week has been to find meetings to attend to learn more about ECAL, understand ROOT and start writing the code for my calibration.

There has also been a huge amount of excitement around CMS seeing that next week there is a major press conference where CMS will reveal some new progress on the Higgs boson. We had a CMS meeting to review the findings and finalize what all will be revealed.

(Waiting in the main conference hall for the discussion to begin.)

I don’t know what all I’m allowed to say so I’ll just leave you all waiting in suspense until the media reveals it next week. Also, on Wednesday we had the CMS summer party at the CMS sector of the ring. We left our car and took the bus from the main sector of CERN where we work to the party, only to find out that the house that we are renting is actually just across the field from the CMS entrance. The party was held in the industrial zone above ground at the entrance to CMS. We all had a pretty good time at the party and were even more excited to find out that they were taking us down into the tunnels.

( Caltech undergraduates in front of an image of CMS, pretty sure it’s life size)

We all got hard hats and took the lifts down 100 meters below to surface to enter the CMS caverns.

Here is Max as he passes through one of the security locks. There are multiple retinal scans along the way to enter the caverns. Just a warning - nobody with pace makers or any other vital implants is allowed down due to the strength of the magnetic field around the detector. Sorry I didn’t include a picture of the detector itself. Turns out that it is in fact too large for a single picture. The machine itself is quite impressive, especially seeing that it is the compact detector. This definitely was a major highlight for our week.

There was another party on Friday night just for all of the summer students. We technically aren’t part of the summer students program but we still wanted to meet all of the other visiting students. It was quite an interesting party. I’ll let you use your imagination for a party of around 100 physicists set up by a group of physicists. It wasn’t as nerdy as you’d think; we’ll just say it was entertaining. It was a pretty cool opportunity to meet a bunch of students from all around the world.

Okay, so now for the recap of our first weekend in Geneva. When we first got into Europe last weekend we were all pretty exhausted so we figured we would take it easy and just explore the small towns around where we live. Turns out that we live in the town next to where Voltaire lived, go figure! We took some time to walk around the gardens of the chateau where he wrote most of his later work. Apparently he worked in Geneva for a while until he had to move back to French side when he had some legal issues with the Swiss government.

Surprisingly enough, the second day we were not that tired. Apparently the Caltech sleep schedule prepared us well for jet lag. We took the tram into the city and got our first taste of metropolitan Geneva. Our first stop was a chocolate shop.

So much chocolate everywhere! Seriously, I think every few corners had at least one chocolate shop. Once we managed to pull ourselves away we were able to make progress exploring the old part of the city center. It was pretty awesome since we managed to arrive the weekend of Geneva’s international music festival. Pretty much every square had some stage with performers. You could pretty much walk around different corners and end up with a festival from another part of the world.

We found a Greek musical ensemble performing outside of the Swiss historical museum and then went inside, only to find a a group of alphorns and accordians within the courtyard. It was a pretty exciting experience. After spending the day walking through the old parts of the city and going through museums we decided to look for a quieter place just to relax. We walked a bit farther away to find a park which we thought would be nice and quiet to sit in.

Welp, that park basically had five or six of these stages within about 300 meters of each other, food stands everywhere and steet performers everywhere. When you can’t beat them just join them. We ended up just buying some drinks and sitting around and enjoying more of the festivities in the park for the rest of the evening. Lesson learned - bring your own water to Geneva, I paid 5 swiss francs (a little over 5 dollars) just for a water bottle. We have pretty much learned just to buy our own things from supermarkets and carry our own food and large water bottles. Despite this the festival was a pretty good end to the day and our weekend.

So yeah, that was pretty much my first week here. Now it’s time to prepare for week two. Up and coming : the CMS press conference and Heidelberg!