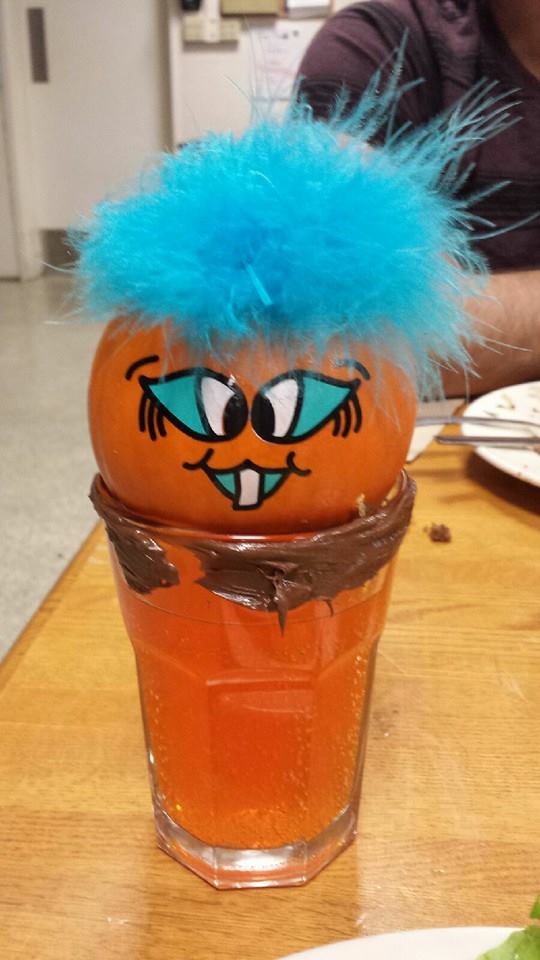 The Friday After Halloween, and All Which That Entails

Bottom line: staying up till 4 am doing chem lab reports tends to mess up one’s mood.

Post-Halloween and All Saints’ Day aside, it is still Friday. Which means that I have a lot of chemistry to turn in. The Ch1a set is due at 4 pm, and reports and assignments for Ch3a at 1 pm–it’s nothing unusual, jut a typical Friday, and like a typical Friday, life sucks until 4 o’clock or whenever I turn in my chem set. I slept through math and woke up barely in time to go to physics lecture at 11 after eating some raspberries and cheerios in a tall plastic cup. Lunch was spicy salmon and avocado sushi from the Chandler Cafe, a convenient choice of food because buying sushi allowed me to avoid the long line that always forms for Friday’s bento box special. I think I’m missing my Asian food from home, though, so we’ll see if I can ease some of those cravings by going out for Japanese food tomorrow lunch. After a brain-boggling but interesting Ch3a lecture for an hour, it was back to Venerable to finish the chem set (I made it with 20 minutes to spare).

I rewarded myself with a tuna sandwich from open kitchen, and took the opportunity to stock up on sustenance for the weekend days. From Thursday grill night I’d obtained a piece of chicken, so today I took some lettuce and two pieces of bread from the kitchen to make a sandwich later. I also carried away some oranges to add to the apple and plum currently sitting on my desk–oranges because I think I’m getting sick. Just in time for midterms! Oh well, at least there is no new math set to turn in on Monday! And on another bright note, my meals for this weekend are set; I also have some leftover quesadilla sitting in my fridge and I plan to eat out once or twice and maybe spend some dbal (food credit) at the convenience store.

Some of my friends are planning to take their midterms tomorrow morning. One of them is apparently waking up at 6 am and working from 7 to 12 on the math midterm, while another has plugged up his time from 10 to 3. (What about lunch, I say?) As for me, I’m planning to study, go out for a meal and a walk on Lake Street with some friends, and then take a midterm in the afternoon. Waking up early sounds like torture, but some people work better in that time, I suppose!

So the question remains, what do I do with the rest of my Friday night? I am apparently blogging about my very eventful day at the moment… Actually, instead of Skyping a friend at Berkeley (he’s sick too and can’t talk for a sore throat), I ended up taking a nap after dinner. I’m still tired from staying up till 4 in the morning even though six hours of sleep is basically the maximum for a high school student. In this vein I don’t envy my 17-year-old brother… and there’s also the fact that he has to live at home with parental supervision and do his college apps and whatnot instead of properly studying for his classes. The nice thing about college and Caltech in particular is that our main focus is on learning, rather than merely getting through a class by bs-ing work. Sometimes (many times) it feels like our brains are sieves and we’re merely getting a dripping of the whole bucketful of information our professors and TAs dump on us… and it’s sad that yesterday was Halloween and I had to miss the annual Millikan Pumpkin Drop to work on my chem lab report… but really, this kind of learning experience is a privilege. Term is going by at three times the pace of my high school curriculum. While it is rather stressful at times, I don’t think I’d rather be doing anything else anywhere else.

Next weekend is Parents Day at Caltech, and I’m looking forward to seeing my brother and my friend from home for the first time in the seven weeks since school started. Midterms will be over by then, giving us all a breather as we go back to grunging our way through the difficult Ma1 sets. I’ll take my two visitors on a tour across campus since I think I’ve familiarized myself with most of it by now. I’ll introduce them to my new friends here, take them out for lunch on Lake, and we’ll hang out and catch up on news and gossip in my room. And if I’m feeling generous, I’ll even buy them Ben and Jerry’s from the C Store!

As it is now 10:59 pm, I think I’ll just retire early and wake up tomorrow at a decent hour to study. I can’t seem to ever be very productive on Friday nights, usually ending up watching Game of Thrones or Doctor Who or drawing murals on my whiteboard or Skyping people from back home instead of getting started on sets.

My mom will probably read this last line and be sad. But because our brains are like sieves retaining only a few percent of the knowledge raining down on us in buckets, I think that, just perhaps, a break is the necessary thing on a Friday night…

Anyway, that’s all for today. Till next time,