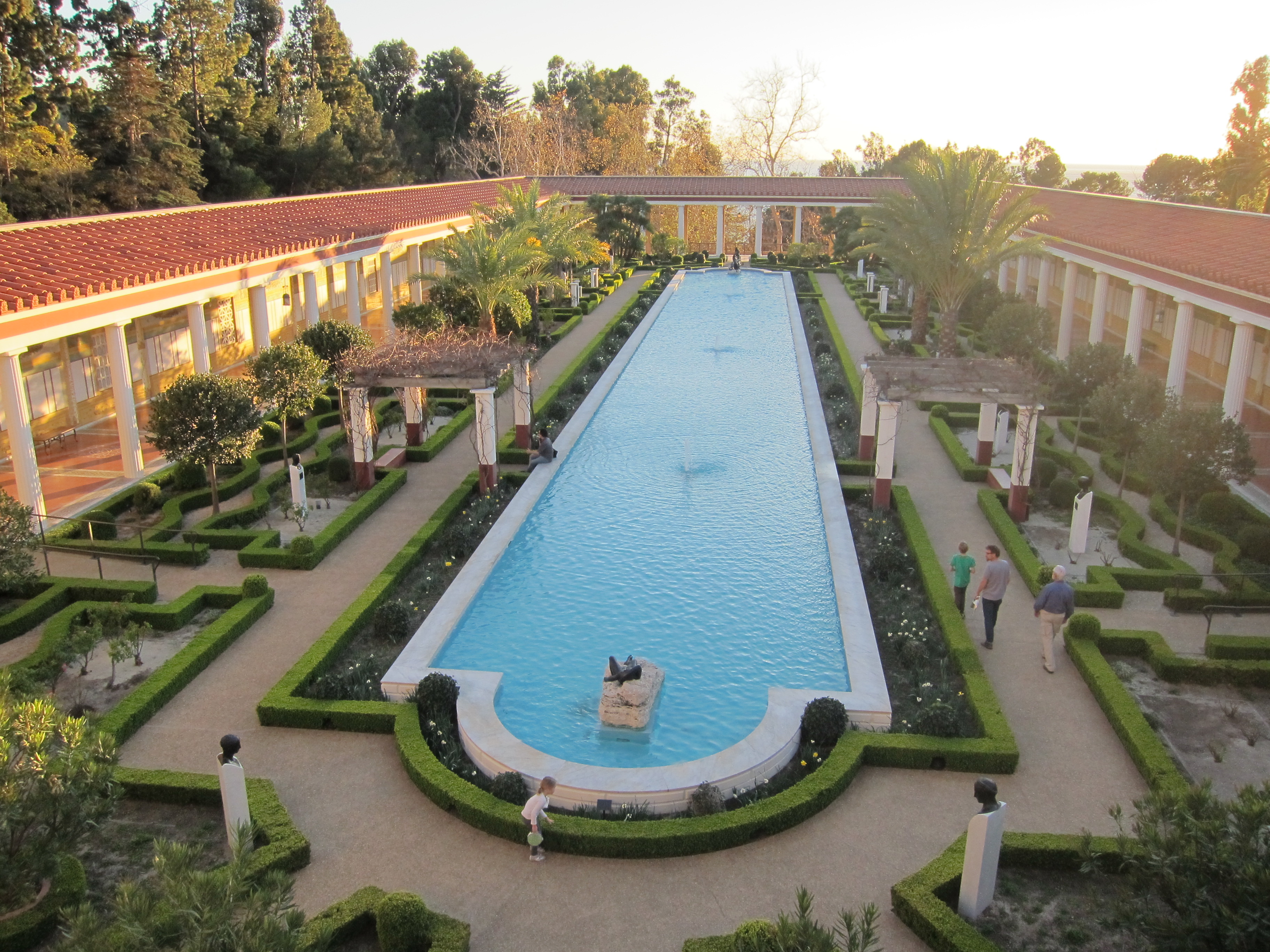 Often times, it's definitely worthwhile to venture outside of the Caltech campus and explore what the surrounding Los Angeles area has to offer. TheJ. Paul Getty Museum at the Getty Villa in Malibu is definitely a gorgeous and must visted destination. The Getty Villa's most striking feature is not only the huge collection ofapproximately 44,000 works of art from the Museum's extensive collection of Greek, Roman, and Etruscan antiquities (over 1,200 are on view) but also the architecture and design.

*View from the balcony of the fountain and gardens!!*

Jean Paul Getty, an American industrialist, had the vision of creating not only a museum to house his vast art collection but also create a European villa and giving the visitors the feeling of what it would have been like to be an a villa in ancient times. Getty had drawn inspiration from Villa dei Papiri, which was ancient villa owned by Julius Caesar's father-in-law in the ancient Roman city of Herculaneum. Getty was particularly fascinated and it captivated his imagination: he wanted to build an Italian villa with architecture inspired by that similar to the Bay of Naples and Pompei.

I was definitely captivated by the amazing and awe-inspiring architecture especially the symmetry and the flowers and herbs that were actually used and grown in ancient times. There was definitely a feeling of authenticity as I felt transported to an ancient European villa!

Moreover, there was a huge amphitheater reminiscent of the Roman Colosseum, where people can watch reenactments of ancient Greek and Roman plays.

The museum isdedicated to the study of the arts and cultures of ancient Greece, Rome, and Etruria, and had a ton of very striking and fascinating art! There was a signifigant number of art that had had some sort of restoration work done. Apparently, the restoration work is always done in a different shade of color so that the viewer can enjoy the original work and see where the newer modifications have been made. A lot of the antiquities have gone through some of rought times because they were in pieces dug up from excavation sites and had to be meticulously put together piece by piece like a very complicated jigsaw puzzle!

The world class antiquity was definitely mind captivating and the flow and beauty of the museum was amazing. There were a lot of sky windows to allow natural light to flow in and allow us to appreciate the artwork! One of my favorite exhibits was the "Hall of Colored Marbles" which showcased the different types and colors of marble that was used in European architecture from different regions:

Since the Getty Villa was right across from the Malibu Beach, it was impossible not to watch the gorgeous sunset over the horizon: