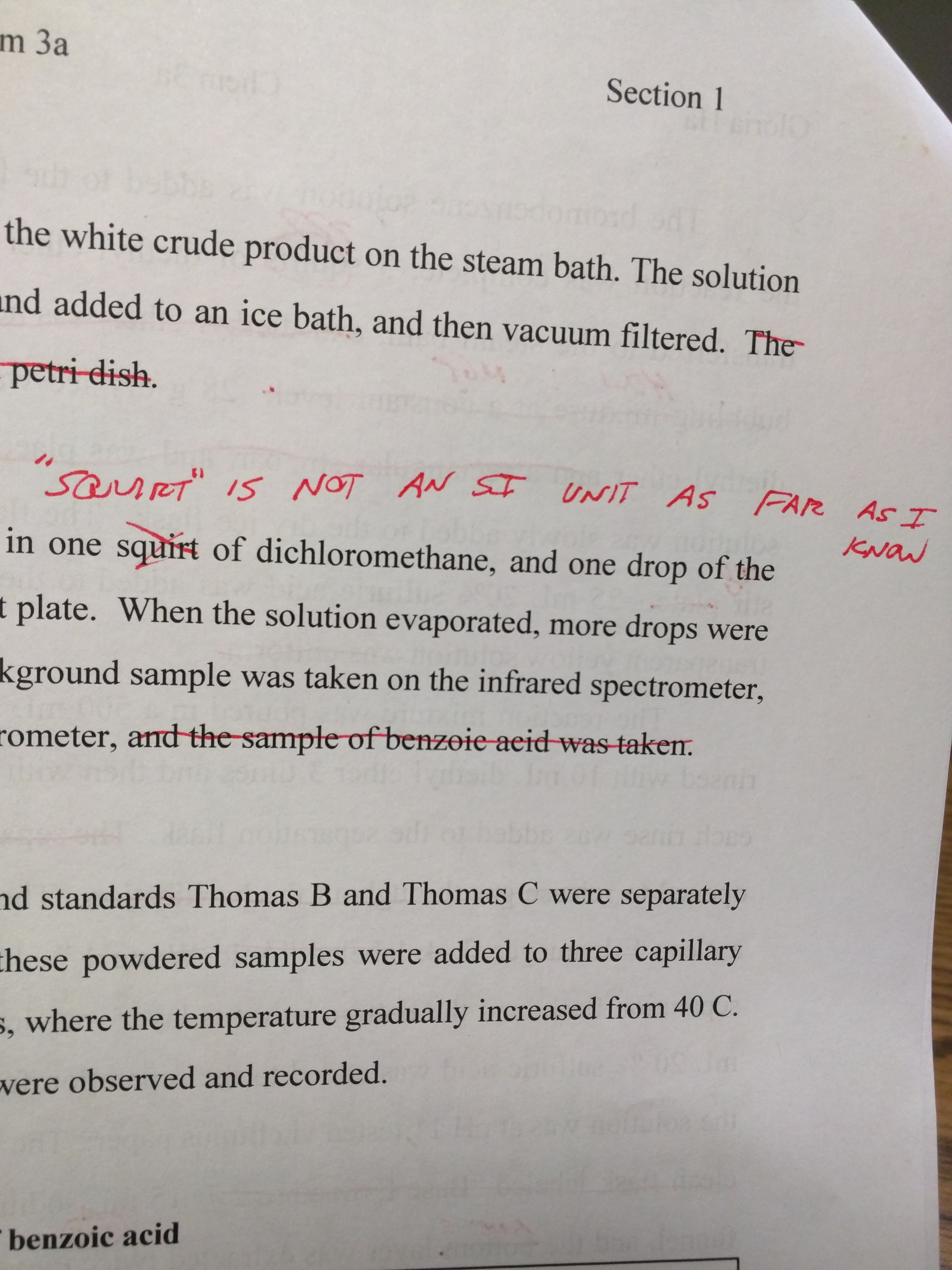 My last post on the delights and despairs of my graded work had an assortment of first and early second term examples. Halfway into third term, I bring you the latest installment.

Second term, I took Chem 3a, an introductory chemistry lab class that is one of the core requirements. I was concurrently taking Chem 1b, an intro to Orgo/PChem, and the two classes meshed together really well. We would do a Grignard reaction to synthesize benzoic acid one day in Chem 3a, then learn about Grignard reagent reactions the next day in Chem 1b lecture. We would take an IR spectrum of our benzoic acid, and soon after learn about the meaning of IR spectra in Ch1b. One of my friends cited Ch1b lectures from Thursday for a Ch3a lab report due Friday — that’s how closely the topics were aligned. Ch3a is offered all three terms, so obviously it doesn’t match up with Ch1b every term, but I was extremely satisfied with how things worked out — the two classes enhanced my conceptual and practical understanding of important topics, and subsequently my enjoyment of both!

One of the main things people think of when they think of Ch3a is the lab reports. There are four labs total, and for each one, a lab report. One of the goals of the class is to teach you how to write a lab report, and I think it’s safe to say that most people have no idea how to write one coming in. But over the course of the term, you learn to use time and words more efficiently, becoming a lab report machine extraordinaire (hopefully possibly maybe).

And now to the grading woes. I improved greatly from my first lab report to my second one, but I still wasn’t up to par for this grader. I didn’t quantify how much dichloromethane I added, so I didn’t want to attach a number to it…

And then I was talking about why my yield was less than 100% (far, far less…), but apparently human error should not be included in the lab report:

This grader made me laugh a lot. They wrote “ARE YOU KIDDING ME? HOW COULD YOU MISS THIS?” on my friend’s IR spectra, which had a mislabeled peak, and other amusing capslock-on-cruise-control comments.

This term, I’m taking Math 1c, which so far has been lots of partial derivatives. A couple of weeks ago, I went to pick up my homework, only to be greeted by ALL CAPS GRADING:

My last name might be Ha. Two homework later, it seems I disappointed the same grader:

I should probably be more careful about my double-checking my work in the future. For the sake of grades, let’s hope my grading woes in the future are of the 20/20 variety!