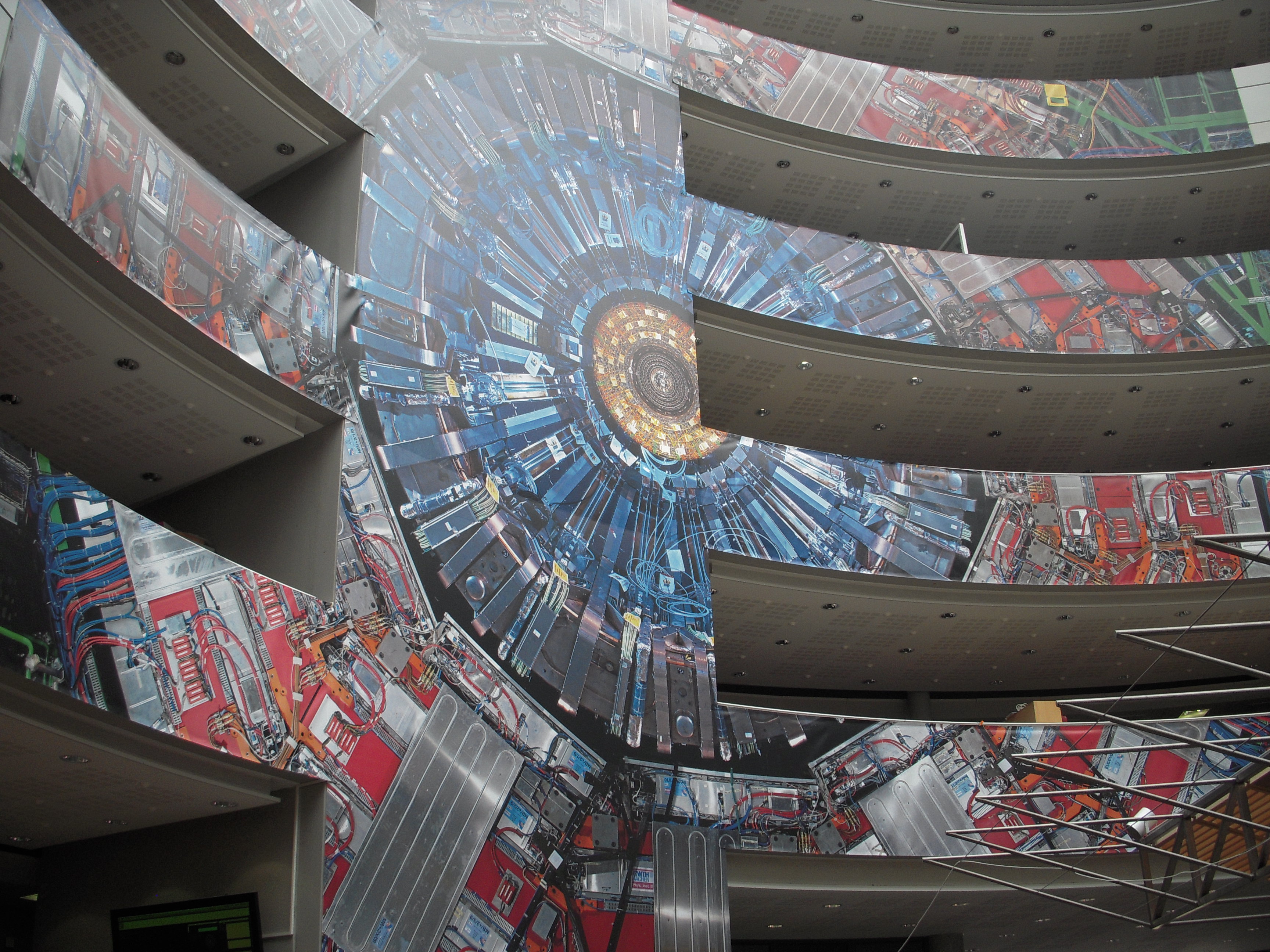 Today Carly and I got up early to go on a fascinating up close tour of CERN, which is also know as the European Organization for Nuclear Research. (The acronym CERN actually comes from the French name for the particle physics lab:Organisation européenne pour la recherche nucléaire.) We were lucky enough to have the opportunity to get an insider view of CERN byJavier Duarte and Alex Mottof Caltech Professor Maria Spiropulu’s experimental particle physics group. We had read about the research and facility in the news and seen pictures, but we were definitely very excited to get a firsthand look especially in light of the recent Higgs-Boson discovery. We first met with Javier who drove us across CERN to Point 5. It took us approximately 15-20 minutes just to drive across CERN and we were impressed with how large the instrument actually is in real life, as part of it lies in France.

Schematic of the locations of the LHC experiments.

The land above CERN was mostly covered by farmland, and non CERN-affiliated people live there, too. We got lost a couple times on the way around. There are some villages on top of CERN where researchers live, but many also live in France or Geneva. When we finally made it to point 5, we met Alex.

Alex and Javier explained how the detector works and we were fascinated and amazed to get a view at how the world’s largest and most complex scientific instruments is being used for fundamental physics research. It has many layers to stop particles resulting from collisions and to measure their trajectories. Since they know the strength of the magnetic field, they can use the trajectory to figure out each new particle’s charge by knowing which way it curved. They can also ascertain its mass, energy, etc all from the particles’ trajectories. There was picture of the detector that was only about a meter squared, but the actual detector is four stories tall. Later on the tour, we saw a full sized photo of it in one of the CERN office buildings.

The CMS detector inside the LHC at CERN.

The innermost layers of the detector have less stopping power, but more precision in measuring energy. The outer layers are a special detecting material alternating with brass from old Russian missiles purely for stopping power. The detectors work by taking the kinetic energy of a particle which collides with them and turning it into light and then the photons are measured. Obviously, some of the energy is lost in the form of heat, etc, but the less energy that is lost, the more precise the detector. More precision could also be gained by increasing the strength of the magnetic field. CERN is closing down for a couple of years in the future in order to do this.

To scale picture of the CMS detector in the atrium of an office building at CERN.

In addition to the CMS control room, we visited the main control room and the test beam. This was aHUGE room full of computers.In the CMS control room, we found the announcing system of using a short song bit as announcements quite amusing. For example, we heard “another one bites the dust” and “oops” played a few times. We were told“Another one bites the dust” means something about failing to record the data for a particle.We were dazzled by all of the monitors and so many scientists at the stations monitoring and looking at the data being collected. The control room had people working with dozens of monitors with about 6-8 per station to keep track of everything and make sure it’s running smoothly.These are used to temporarily store the “interesting” data from collisions. So much data is created that they can’t store it permanently in those computers; some is sent to other computers and storage systems on site.

The information is also backed up at a few different labs around the world.

This is handy because a few days before we visited someone accidentally deleted a bunch of data at CERN, but since it was backed up it was no big deal.The hustle and bustle of science talk reminded us a lot of the Caltech atmosphere.

After this, we went to the test center where new detection set ups can be tested on the surface before being lowered down to the normal beam level. It’s a giant warehouse with a huge crane. We also saw office buildings for the researchers. They can download just the pertinent data from the huge CERN computer system onto their laptops. After we parted from Javier and Alex, both of whom were really nice and reminded me a lot of the Caltech atmosphere, we went to the public museum which explained a lot about the history of CERN and fundamental probing questions scientists at CERN are asking and finding more about. We loved exploring the many aspects of CERN for a firsthand view on how research is carried out.

Next, Carly and I went back to Geneva for lunch. We had Italian food. A cultural difference we notices was that tap water wasn’t just brought free to the table since that was what we were used to in the US and they have so many free public water fountains in all Swiss cities. Another difference we noticed was that, in Switzerland, a lot of people smoke. In the US, there are designated smoking areas, while in Switzerland there are designated non-smoking areas. This unfortunately meant that sitting on a restaurant patio in Switzerland meant breathing in smoke.

After lunch, we went to the United Nation Headquarters, which was pretty cool. It was interesting to hear about how they decide how many representatives each nation can bring to this or that meeting, and how translations work and about the official languages of the UN. The building is HUGE and was originally built for the League of Nations. We all had to wear neon orange visitor lanyards. There was a park surrounding the building with many peacocks, but only delegations to the UN can access it for security reasons.

Another interesting thing is that the UN grounds are technically not part of Switzerland or any other country.

Carly and I in front of the entrance to the UN.

A United Nations meeting on managing the rights on migrant workers.

Another meeting room in the United Nations. The magnificent artwork is from the days when the building was used for the League of Nations.

The Red Cross museum across the street was closed, so we walked along the river to see the Jet d’Eau.

The Red Cross Headquarters is closed for renovations.

We got some great pictures of the water, the boats, and people fishing.The architecture of the houses and buildings bordering us was very aesthetically pleasing. They were pastel and had nice balconies. The public fountains in Geneva were also nice. I would say in general that the public water fountains in Switzerland look much nicer than the ones in the US, but US fountains are made just to drink directly out of; Swiss ones are made to catch the water in some sort of vessel.

Walking along the waterfront with the Jet d’eau.

Next we took the train to Lauterbrunnen, where will be based for the hiking portion of our adventure. I love taking Swiss trains! First off, they are very punctual and clean. They also have great views no matter where you are going. The train climbed the hills above Lake Geneva, through the vineyards, then continued on into cow country, and then kept climbing up to reach Lauterbrunnen valley. We arrived at the hostel a little past check in time, but fortunately one of the employees was still there and was able to give us our key and let us check in. We had to leave our shoes on a rack by the door and use slippers they provided. Our room had two sets of bunk beds and a loft bed. We also had a balcony.

Our hostel in Lauterbrunnen valley, which is the largest glacial valley in the world and is ringing by 72 cascading waterfalls!