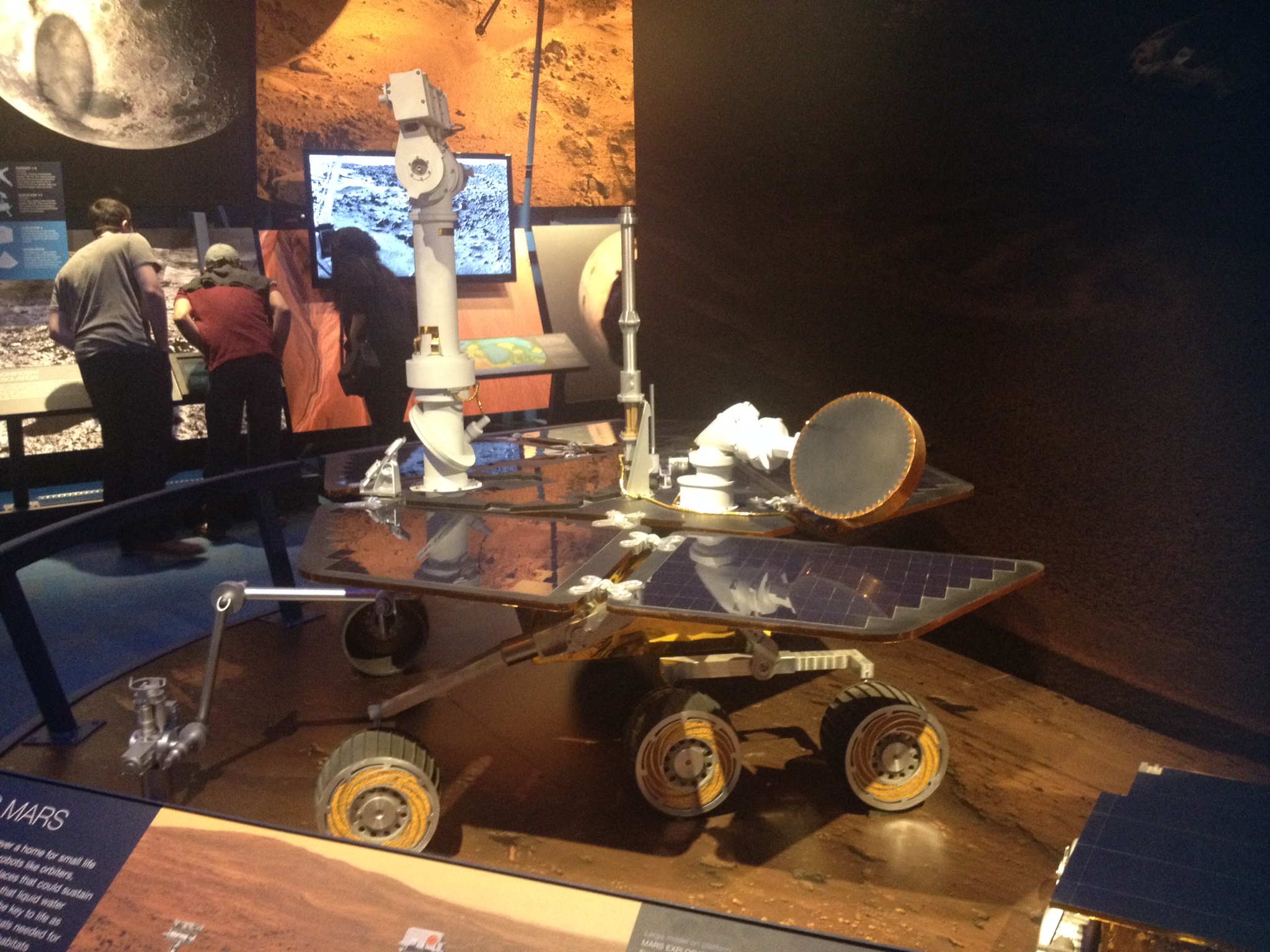 I walked on Mars.

The Student-Faculty Programs Office organized a Jet Propulsion Laboratory (JPL) tour for us a few days ago, and it was one of the most exciting places in which I have ever stepped foot. Immediately upon arrival, we were greeted by friendly faces who commenced our tour with a brief history of JPL and its goal of propelling rockets into space.

They then took us to the JPL Museum, where we saw a model of Spirit and Opportunity, two rovers that landed on Mars in search of liquid water.

Later, we were taken outside, and after climbing up quite a few hills (JPL is actually located on a hill), we reached the Mars Yard! This area is meant to simulate the Martian surface to test drive rovers, so on it are situated various patches of rocks and multiple different grades of slopes to ensure that the rovers can survive wear and tear.

Here’s the Curiosity test rover on the Mars Yard. If you look at the center wheels, the pattern stamps out “JPL” in Morse Code!

The imaging system on the front of this rover has 17 cameras to take pictures of the surface, and the scientists were actually testing this system while we were there, so the head kept moving in different directions. Interestingly, the rover is powered by plutonium-238 oxide, a radio isotope.

A bunch of moles on Mars!

What is particularly interesting about this rover is that its speed is only about three miles a year – that’s right: it moves three miles every year! In fact, 100 meters a day is a lot for the rover, simply because its purpose is not speed but rather discovery. It is actually quite autonomous in that it decides its path based on the landscape it encounters. In fact, it would be difficult to joy stick the rover simply because the round trip light time from Mars to Earth is anywhere from 8-40 minutes.

That brings me to another interesting point I learned during the tour. The data from rovers such as these is sent back to Earth through a series of connections which makes the data pipeline faster. For example, data from Spirit and Opportunity were sent to Odyssey, which was flying above Mars, and then back to Earth (an orbit to orbit to Earth path).

As the tour progressed, we reached this enormous clean room where all of the rovers are built. The circular, white dome in the center is a supersonic heat shield test probe.

Something that really caught my attention was a short movie clip that they showed about all of the workers anxiously waiting for a signal to know if a rover had landed on Mars. They were all sitting in a control room (we got to sit in their exact spots!) and underwent what may have been the seven most anxious moments of their lives. Why? It takes seven minutes for the rover’s signal to reach JPL from Mars, and in those seven minutes, the rover has either succeeded or failed. Which one happens can only be known here on Earth seven minutes after the event. As the countdown happened on screen, I could feel my own pulse beating in anticipation. It was quite the treat, and all I have to say is a few simple words: space is cool.

Anyway, if you have a chance, I highly recommend taking a tour or even SURFing there if you happen to come to this side of town!