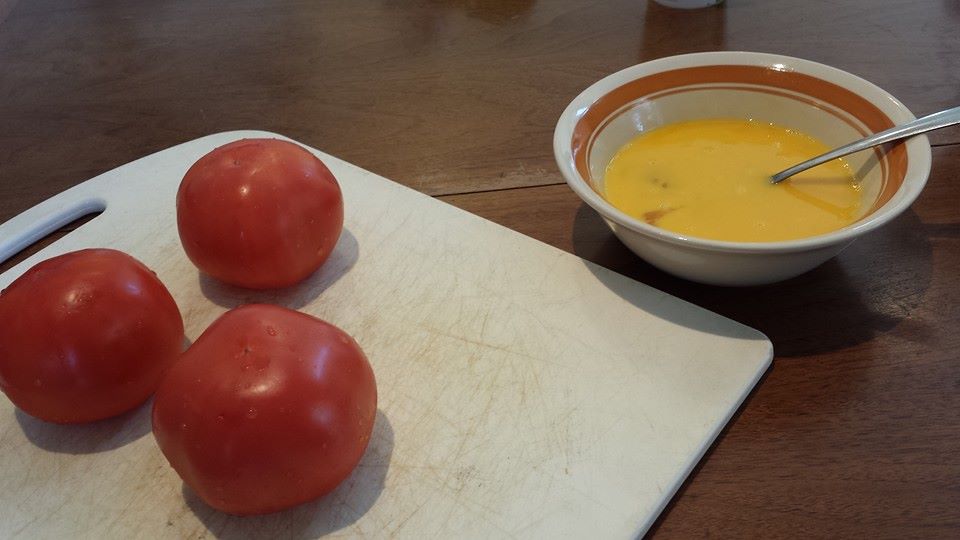 I was glad that we didn’t have midterms or quizzes over the weekend for once. The past three weeks killed my brain, in a metaphorical sense, so it seemd a good idea to have a little extra fun this Saturday and Sunday. Which happened to coincide with a rigorously difficult math set…but whatever.

On Saturday I awoke and decided to research Stephen King’s It (a rather creepy horror story for those of you who don’t know) and other books online until 12. It’s always been a pastime of mine, even if I do now find myself at Caltech doing STEM 24-7. For lunch, a couple of friends and I headed toward Lake Street and ate paninis at the Corner Bakery. I suddenly remembered that I had a few weeks-old eggs still sitting in my fridge that I should probably use up soon–they were bought with the intent of cooking an Asian meal, which had never came to fruition.

“Oh! Do you guys know the Chinese dish fan qie chao dan?” my friend Yuka said. She’s Japanese but knows quite a lot about Chinese culture and language.

My other friend David is actually Chinese, and I’m Taiwanese. We looked at each other and said simultaneously, “Yes! …We should totally make it!” So we stopped by Trader Joe’s and bought three tomatoes, then agreed to make Asian brunch the next day. For the rest of Saturday, I did some of the math set and had a pretty awesome time at Games Night at the Caltech Alumni House.

Come the Sunday hour of 11 am in the kitchen:

Simmered tomato (hence why we needed a pot with a lid)

Yuka taught me to make those triangular Japanese riceballs with the leftover rice, the most intriguing step of which was rubbing my hands with salt and water, much in the way I imagine people buttering their hands during baking. Before we knew it, it was 1 pm and I had to leave for my piano trio rehearsal. The three of us had managed to gobble down 3 cups of rice and use up two hours on food. But it was a taste of home that none of us had had in a very long time, and I believe that it made all of us more efficient and light-hearted when we went to tackle homework afterward.

*Endnote: We actually didn’t spend all the time after that doing homework. There was also the Caltech Occidental Orchestra concert that afternoon and the Diwali Festival in the evening. All in all, I’d say of this weekend: Less work than I would have wanted to finish, more fun than I’ve had in a long, long time! It translates into more productivity during the week anyway! Till next time then, Anita