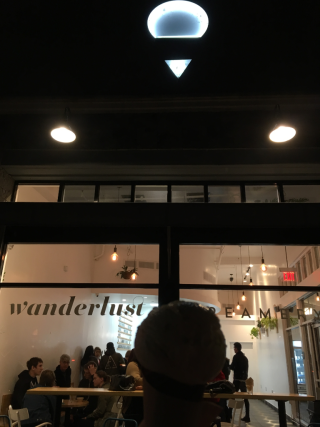 Since I’ve come to college, I’ve probably consumed more ice cream than I have in the rest of my life. I feel like I have ice cream nearly every weekend now…It’s definitely not a healthy habit, but it’s so nice to get ice cream :) Here’s a short, 2-part overview of the ice cream shops I’ve visited around LA, in order of distance from campus: Afters, Bengees, and Baskin Robbins: Afters is very close to campus, on Chester and Allen, and features crazy flavors like milk tea and lavender. The ice cream is very pigmented, and they also have this blue colored ice cream in a glazed bun…which I haven’t tried, but it looks very sweet. Bengees is another ice cream place close to campus, near Lake Ave, but I haven’t been there. I think the general consensus is that Bengees has more classic ice cream flavors and is better than Afters. There’s also a Baskin Robbins on Lake! These ice cream places are all a 10 minute walk away from campus.

Fosselman’s Fosselman’s is in Alhambra, which is a 15 minute drive away, and their ice cream is pretty good. I love their dark chocolate flavor; it’s not too rich or too sweet, and it’s great.

Wanderlust Creamery Wanderlust is in Glendale, and they feature flavors like mango sticky rice, ube, and sencha tea. One of their selling points is the Ube cone rather than a normal sugar cone. I think some of their flavors are too sweet or too strong, but they have this rügbraud flavor that is very yummy. It’s a bit salty, but not too salty, and has sweet crispy pieces in it.