Stress and mental health are matters I take very seriously. I could (and probably will) write an entire blog post about it, but for today I want to explain, and hopefully help you avoid, one aspect of it that particularly affects prospective and incoming college students. 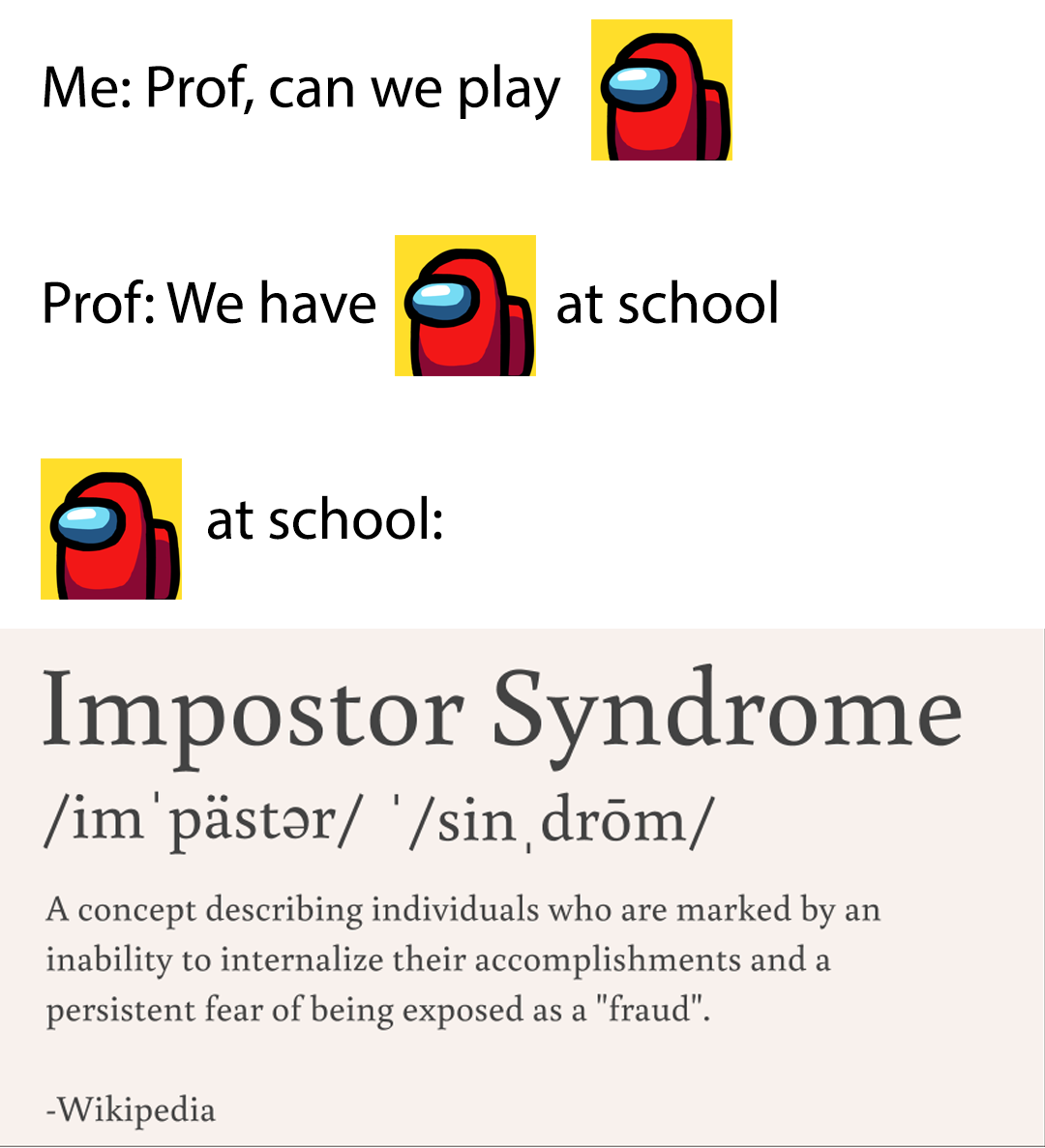 Explanation of the meme ;-)

The bad news: If you’re considering applying or have been accepted to Caltech, you probably don’t need me to tell you that the college admissions process is extremely stressful. And how could it not be? It’s only the entire rest of your life that’s contingent on this application! One wrong word in that essay, one blemish on that transcript, or one single waking hour squandered? Kiss your dreams of changing the world goodbye!/sTone indicator: sarcastic You might as well skip Backupsmore University and move straight into a log cabin in Gravity Falls, Oregon./refTone indicator: making a reference

That was a joke. (Besides, Backupsmore rocks. Stan got out of there with a PhD and a huge grant in like 3 years.) But it’s an easy thought process to get trapped in – I’ve certainly been there. To this day, I have trouble putting down my work and relaxing in the little downtime I get. (Hence why I am writing this at 11:49PM on a Sunday night.)/genTone indicator: genuine

In all seriousness, defining your success and self-worth by a test score, a class rank, or an admission decision is rarely conducive to good mental health. But despite that, thousands of students every year, whether under pressure from themselves, family, peers, society, etc… will push themselves far past reasonable limits trying to live up to these arbitrary, inconsistent, and sometimes completely meaningless standards. It is my strong belief that this sacrifice is almost never worth it.

The good news: it doesn’t have to be this way! Surviving and thriving at Caltech requires strong academics, yes, but equally so it requires self-motivation, passion for what you do, and the ability to fail gracefully. Read that again. That’s why the admissions team has been working hard to make our application much more “holistic.” In other words, focusing less on your numbers (SAT/ACT scores are no longer required through fall 2025!) and more on your character (extracurriculars, personal statements, etc.). That doesn’t mean Caltech is dropping its standards – quite the opposite in fact – but I hope it does allow you to stress a little less about a few percentage points ;-)

Things that are pretty cool:
Straight A’s
Getting a 5 on the AP Calculus X̶̪̖̒̊K̵̨͚̺͍̀̇̑̚Ω̵͖̳̖̃̓̎̔ exam
Winning a science olympiad or a research competition

Things that are equally cool:
A “B” in a difficult class you took to challenge yourself
A random hobby you’re passionate about
Spending most of your free time working an after-school job to support your family

So you got in! Now what?

Allow me to paint you a picture; to spin a yarn, if you will.

It was Fall 2020. The popular mobile game Among Us was in the midst of its meteoric rise to infamy. It was a very uncertain time – nobody knew when we’d be allowed to move onto campus. The subset of undergrads who kept in touch over Discord found solace in the spaceship in Among Us, isolated from the hellscape of 2020 by billions of miles of void. Techers from vastly different walks of life, many of whom had never met in person, suddenly shared a common experience; they formed close bonds through the hours of working together to keep the ship running and unmask the impostors.

But for some people, something about Among Us put a twinge in the depths of their soul. Perhaps it stirred up a long-suppressed fear of being exposed as a fraud; an “other”; an impostor.

pictured: a whiteboard in a Caltech lecture hall with a drawing of a character from the popular mobile game Among Us. this icon, known as an “amogus” (pl. amogi), has taken on a similar cultural meaning to the Cool ‘S’ and “Kilroy was here” in that they pop up in unexpected places.

Indeed, impostor syndrome has taken Caltech by storm lately. And the rigorous academic environment, often reminiscent of the constant onslaught of spaceship tasks in Among Us, doesn’t exactly help.

For example, a lot of professors take the “firehose”As in, ‘drinking from’. approach to teaching, meaning you get a lot thrown at you at once. Most students have trouble with the fact that you’re not expected to absorb and understand all of it. You’ll likely often open your calculus exam and realize you don’t know how to start any of the problems. Or maybe you’ll start worrying that you’re only passing a class because you’re getting “carried” through the problem sets. It’s easy to immediately blame yourself for not studying enough, not being cut out for Caltech, etc., but in reality, the work (and, yes, the grading scales) are made with the intention that everyone should be struggling. For some people it’s less obvious. There’s a running joke that our mascot should be a duck instead of a beaver, because from the outside, it looks like we’re serenely gliding along the water without a care in the world… but underneath the surface, we’re all paddling like hell. That’s why collaboration is so important; it often does take a dorm room full of Caltech students to change the proverbial light bulb!

That’s not to say it’s always miserable – on the contrary, this level of rigor provides one-of-a-kind opportunities to not just learn the material, but to immerse yourself in it. It’s a fundamental part of studying at Caltech: you gain experience and familiarity with how the sciences look and feel IRLin real life , rather than just a bunch of memorized concepts.

However, I also think it’s important to highlight how this process isn’t always 100% positive -- especially at this level of academics. It’s natural to be hard on yourself. It’s normal to struggle. In fact, it would be weird if you didn’t. Of course, that doesn’t make it any easier - believe me, I have felt the pain of falling short of an A by 1 point. I know all too well how much it bites to get a 50% on that problem set you felt really confident about. And yes, I do often stress out when I can’t solve that “easy” problem without help./srsTone indicator: serious 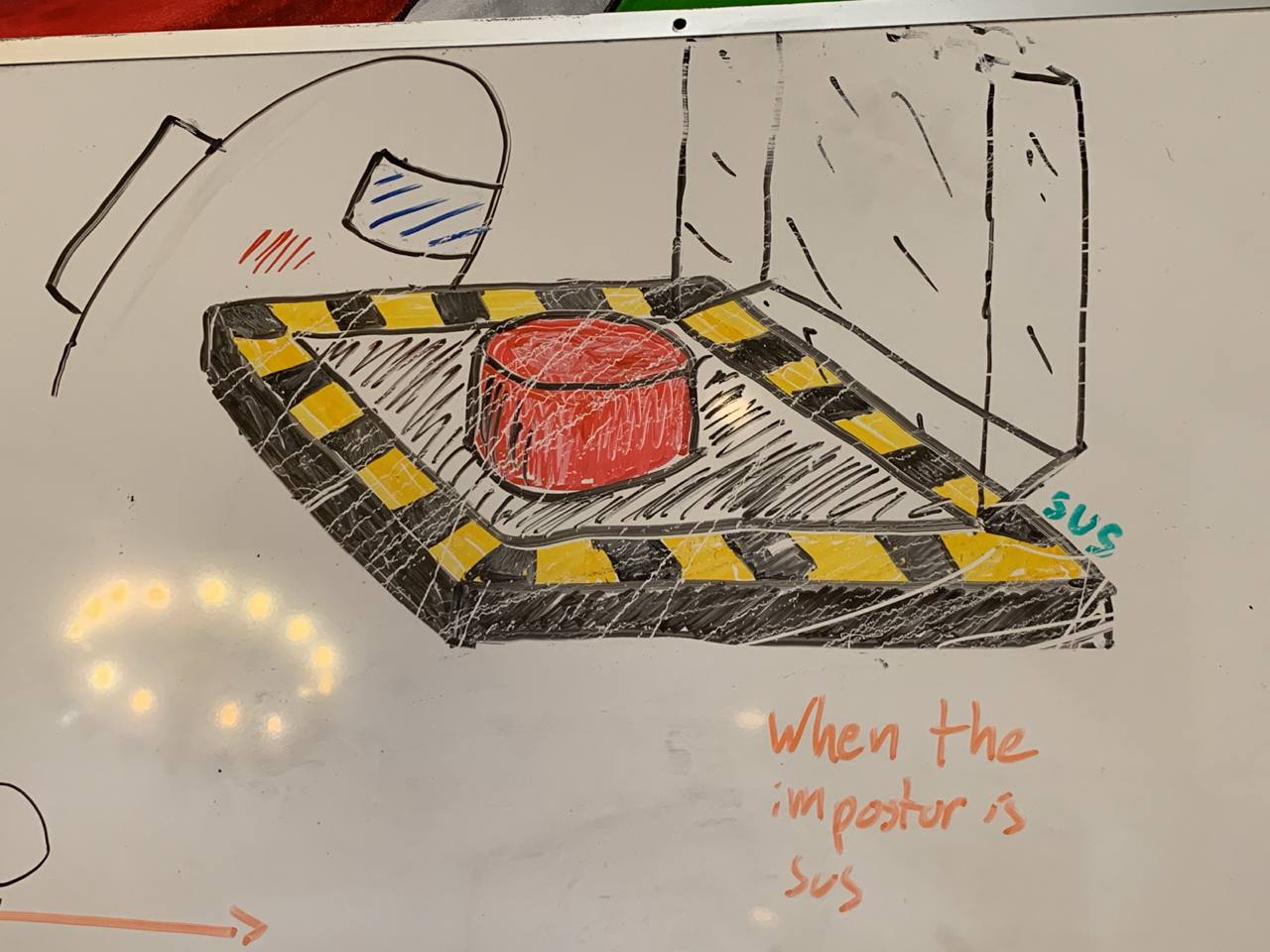 For people who don’t get this joke: There’s a popular mobile game called ‘Among Us’ that’s sort of like a real-time version of Mafia set on a spaceship. Most of the players are trying to determine who’s the ‘impostor’ while completing tasks, and the impostor is trying to kill all the other players. So when he says ‘red sus’ he means, the red player is acting ‘sus’picious and is ‘sus’pected to be the impostor.

But life goes on. Every now and then, it’s good to step back and remember where you are: a place where everyone is brilliant and talented. If you’re behind schedule or having a tough time with the work, it doesn’t mean you’re somehow “worse” or less capable than others. It doesn’t mean you’re doomed to fail. It certainly doesn’t mean admissions made a mistake. (Admissions doesn’t make mistakes!/frTone indicator: like, for real!) Maybe it means you’re weaker in that subject, or dealing with personal circumstances, or at the very worst going to have to retake the class (gasp! the horror! the disgrace!/sTone indicator: sarcastic). For real though, despite what you may have been told your whole life, these are small potatoes ;-) 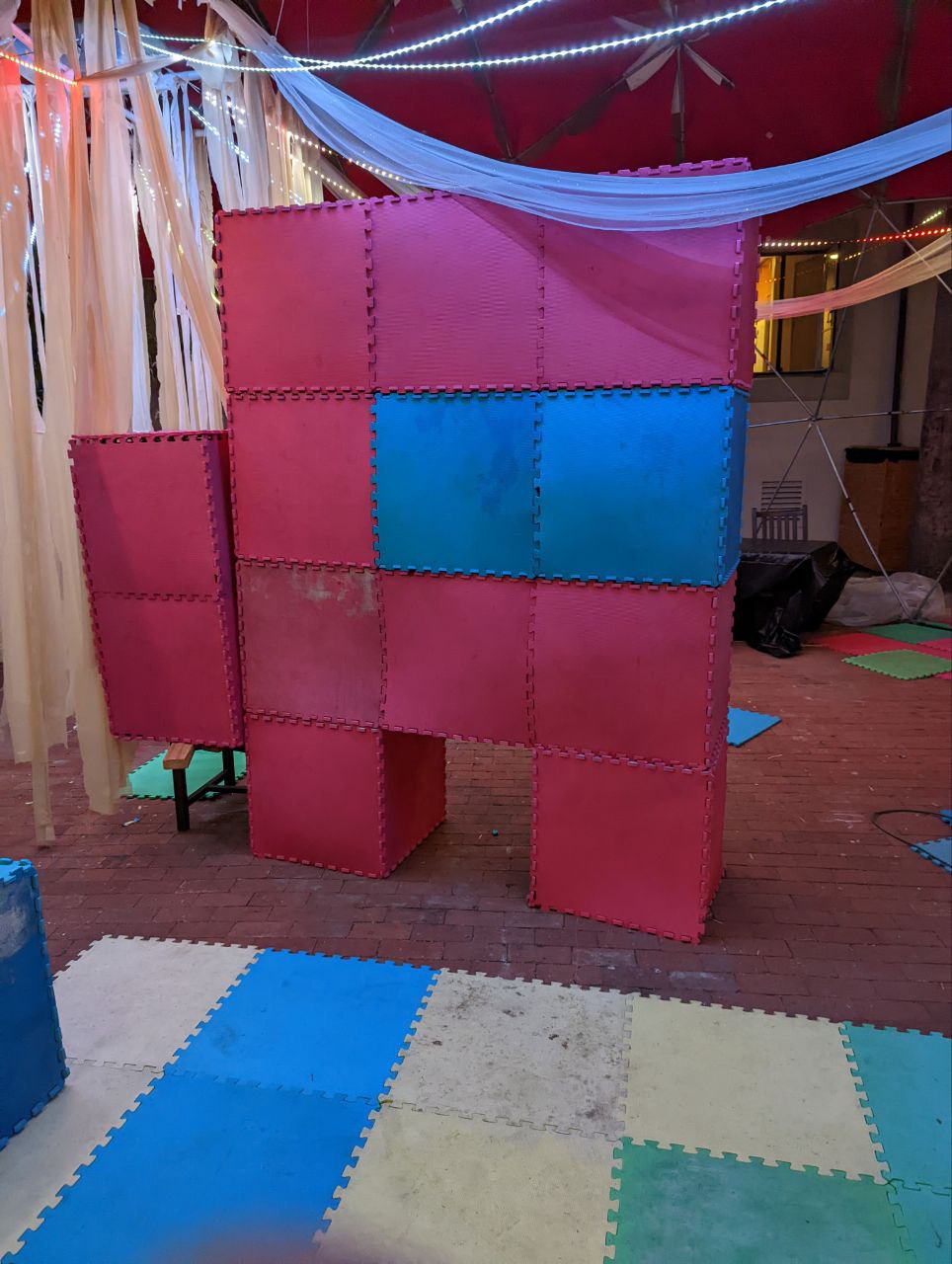 Pictured: yet another amogus, this time hidden in plain sight as a decoration for the Spring ‘22 DAVe Interhouse party.

I am a sophomore undergrad at Caltech, not actually part of the Admissions team, so I feel like I should say that the views and opinions in this post are my own. That said, if you have any questions about Caltech or college apps in general, I would totally love to help! Feel free to email me at magutier@caltech.edu :)

Special thanks to Anna M. for maintaining the #sussy Discord channel, and the Dabney House “AMONG US” group chat for providing the in situ amogus photos <3

Cover photo made using craiyon.com (formerly DALL-E Mini) with seed string “among us impostor at caltech university campus with mountains in the background at sunset” 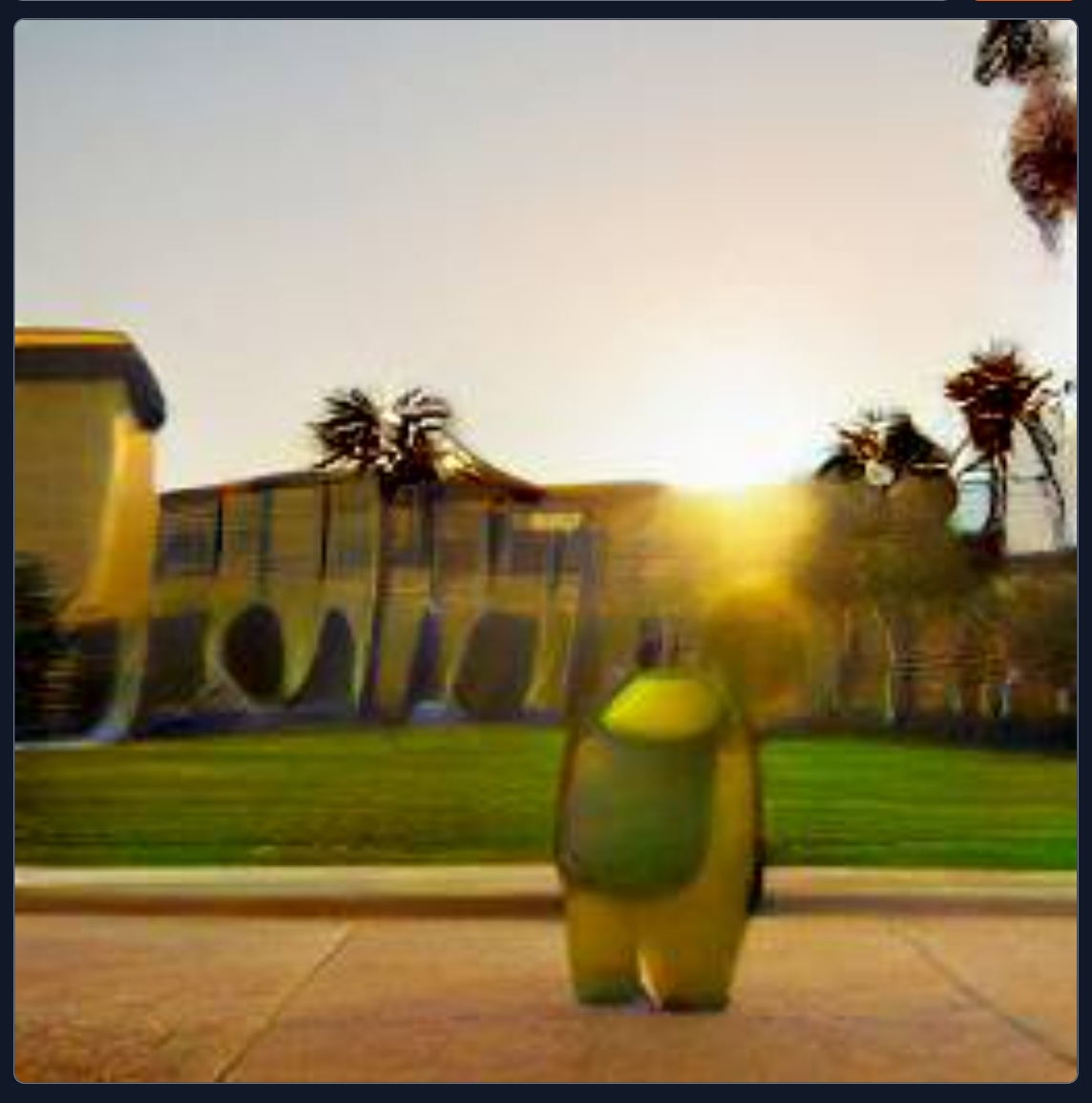 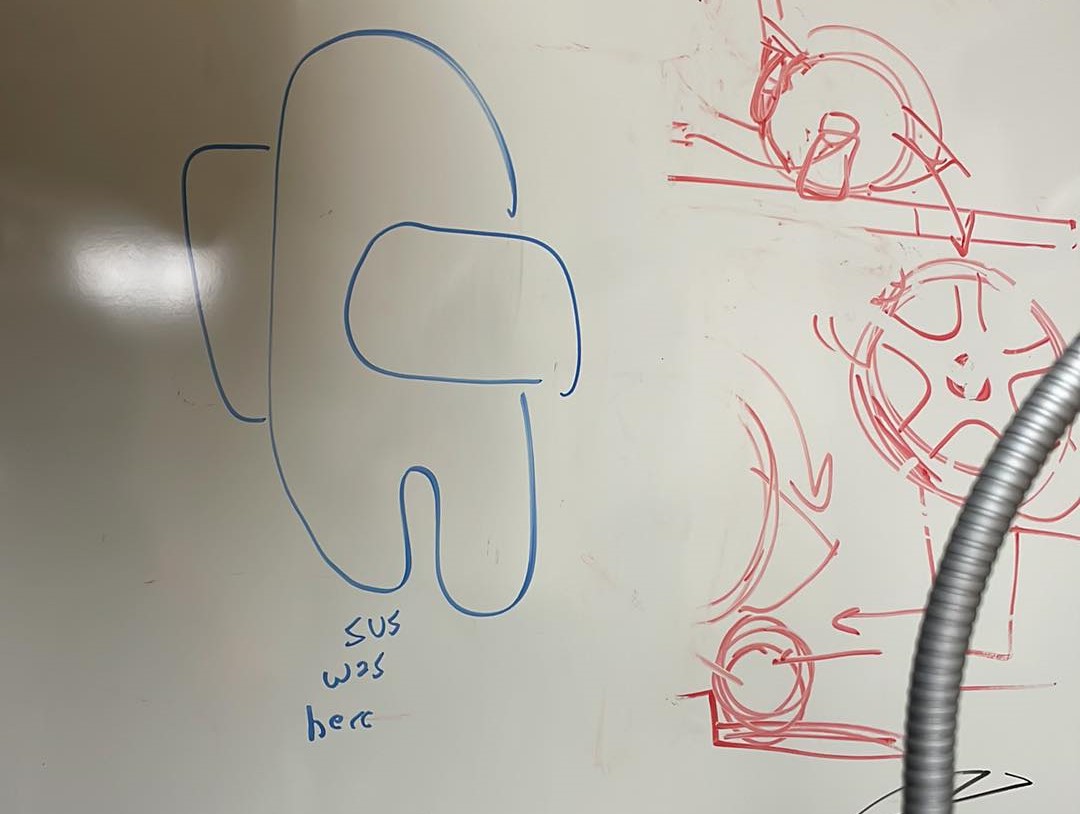 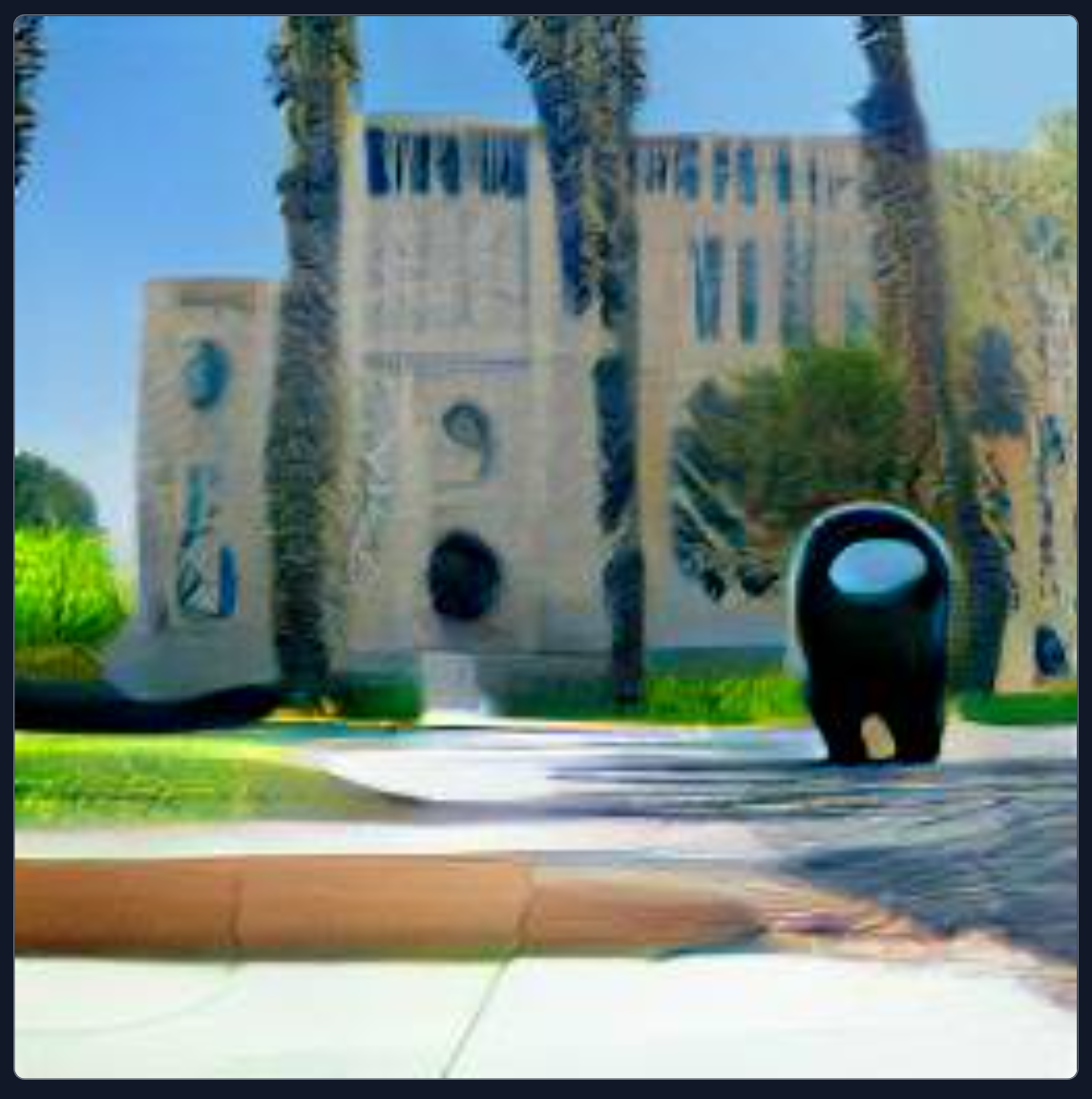 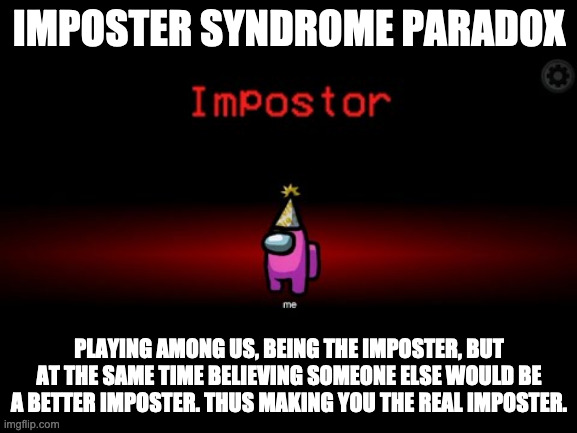