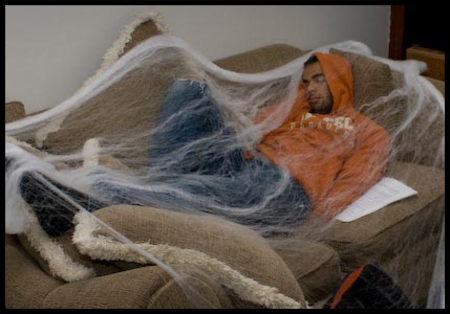 This gives sort of a Rip-Van-Winkle look. Anyway, either due to the fact that this is epically funny or the fact that my friends and I have poor taste, we found this hilarious. (You can judge for yourself, that’s a picture of poor sleeping Ali to the right).

OK, the food was awesome, but now I needed some way to work off all of the excess calories consumed. First, I hit the gym with Ali on Saturday for our regular work-out, just some simple lifting. Although that’s a fun method to burn calories, it’s not nearly as fun as heading to a party and dancing the calories away. Luckily for me, the Ricketts House-hosted party GnG was this weekend. GnG is one of my favorite regular parties at Caltech; the music is loud and awesome, the atmosphere and lighting is great, and the venue is always packed. Dance until you’re worn out, then relax in the cool courtyard until you’re ready to dance again! I may have embarrassed myself by loudly singing along to Shakira’s "Hips Don’t Lie", but I’m OK with that.

Somewhere between the parties, workouts, and free food I managed to log an hour or two of Rock Band. We’ve actually got three copies of Rock Band in different rooms of Lloyd, so at any given time you could have up to twelve people playing simultaneously. I don’t think we’ve done three bands at the same time, but we did at least two last night–a lot of fun for all involved.

But that’s not all, there was one last incredibly awesome thing I did this weekend. Are you ready for this? I went to my first play! (I know, I know, I’m horribly uncultured) But this was not just any play, this was a play starring one of my friends, fellow Lloydie Christina Kondos! Rocket Girl is a play about the life of Mary Sherman Morgan, America’s first female rocket scientist. I was amazed at how awesome the play was–exciting, funny, and dramatic at all the right moments. Now I have convinced myself that I really need to go see "Wicked" before it leaves LA.

With all the fun stuff I did this weekend I haven’t had too much time to work, so excuse me while I go prepare for tomorrow. I’ve got to give a repeat performance of the SURF presentation mentioned in my last post. I should also probably study Chinese… or maybe go to the hot tub…