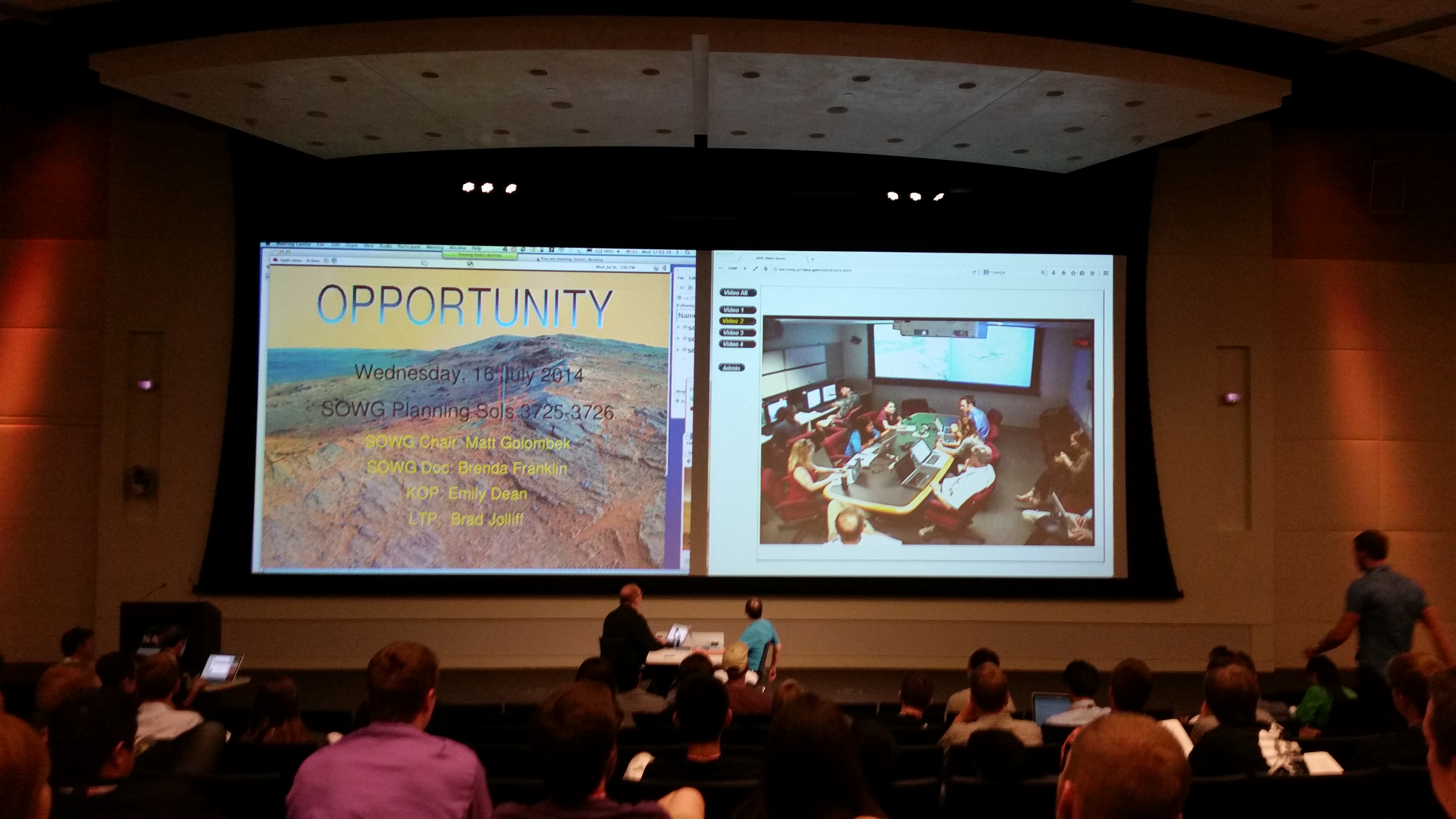 Listened to an Opportunity meeting! And to Morgan Freeman!

Today (Wednesday) we got to watch/listen in on an Opportunity meeting. They ran into some technical problems and sent out an email to us interns that they would conduct the meeting publically so that we could listen in. Below is a picture of our view:

We listened to them as they discussed the recent progress of the rover as well as what their plans for the next day (or rather, sol, what a Martian day is called). They explained in a quick 30-minute briefing to us before their actual meeting how the procedure actually works (i.e. when they communicate with the rover, when the rover executes instructions, how it handles pitfalls like the current one, etc.), and then we got to watch the meeting unfold, how first they did the typical debriefing on what the rover did and then how they were planning to solve the problem.It’s such a cool feeling to be in the middle of these things, missions that are making headlines across the nation and even around the world. I remember when I first learned about things like these Mars rovers I thought that there would be a distinct transition, where we went from “little boy” land of contrived homework problems to “real world” problems and solutions, but this has increasingly proved to not be the case. It is very easy, particularly at a university like Caltech, to pick up exposure to the more real-world of problems even while still taking the baby steps that classes provide, and the distinction between “real” and “contrived” problems blurs much more so than I expected.

This is certainly one of the coolest things (and most important things) to keep in mind going to university though, to participate in as many events as possible. Inevitably many will go over your head, inevitably many others will be boring, but simply seeing this sort of exposure means you will see/think outside of the academics bubble into the bubble of the working and researching people. I haven’t done a great job of this, but every professor/upperclassman that I’ve talked to has always highly recommended attending as many talks as possible, and it’s certainly something that the average student lacks. JPL in this regard is very similar to Caltech, the notable difference being simply that Caltech will produce much more theoretical research while JPL harkens back to the projects that sparks everybody’s interest in sciences (Mars rovers, moon landings, satellites, etc.).

But now it is Friday, and what happened today pales in comparison to a simple opportunity meeting. Today JPL was paid a special visit by none other than Morgan Freeman, God himself. I just decided to go straight to the auditorium upon arriving, because I knew there would be a huge line that would make getting a seat difficult. It turned out that they started turning people away from the building entirely, even from the overflow auditorium. I managed to get into a seat right in the middle of the main auditorium, though not particularly in the front