Interhouse (n). An official party put on by one of the houses. There are 8 Interhouse parties per year - Caltech Little T

Typically a frosh project, the leadership for interhouse mainly consisted of first-year Lloydies. Jenni, one of the art chairs, weighed the theme options based on the “freedom/possibility the theme provided for art,” with some themes providing much more inspiration than others. For example, she might have a hard time coming up with artwork for ‘bachelloyd’. Other positions included the party chairs, construction chairs, and food chairs. Because the sophomores did not have the chance to organize interhouse when they were frosh (due to covid), some helped out in various positions. 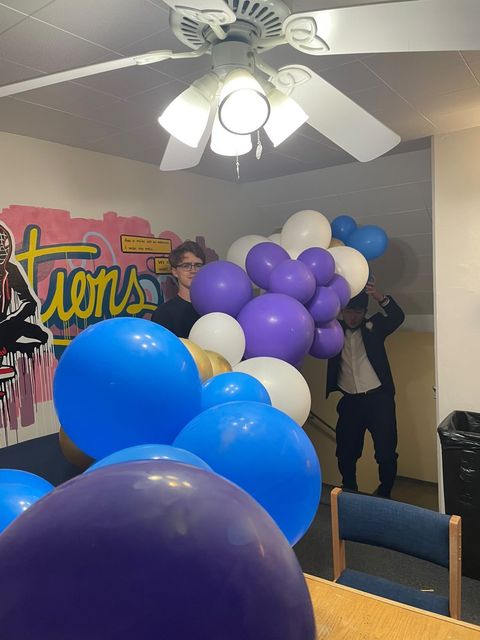 The four possible themes went out to a vote decided by all Lloydies, and after an additional meeting and election overturning, we decided on the Lloydax. Everyone was very excited about this idea, with visions of truffula trees and thneeds spinning in our minds. Memes and design suggestions were sent back and forth on the Lloyd mailing list. 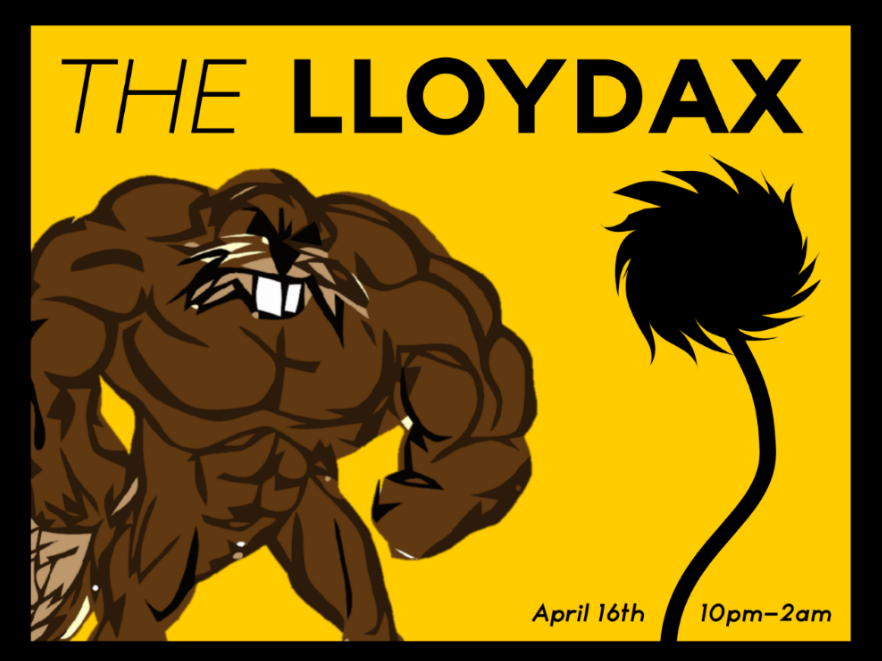 Adele, our food chair and expert chef/baker, set her sights on crafting an interhouse menu like no other - her main motivation was “using lots of colors, in addition to including foods that are featured in the film that inspired our theme”.

In the movie, we see bears eating marshmallows, so Adele included them in the menu, adding colorful chocolates to “add vibrancy”. She also ordered cotton candy, which of course resembled the fluffy truffula trees. Finally, Adele created three colorful centerpieces (pièce montèe). They took a total of 10 hours to make, and consisted of “a colorful array of choux pastry filled with vanilla pastry cream, arranged in a conical structure, using caramel as glue.”

As for the artwork, Jenni took the lead and began creating the wall-to-ceiling boards that would serve as a backdrop. Like many people who worked on the project (including myself - I painted the skies blue and grass green - very tough work), Jenni did not have much experience with anything similar before embarking on this project. 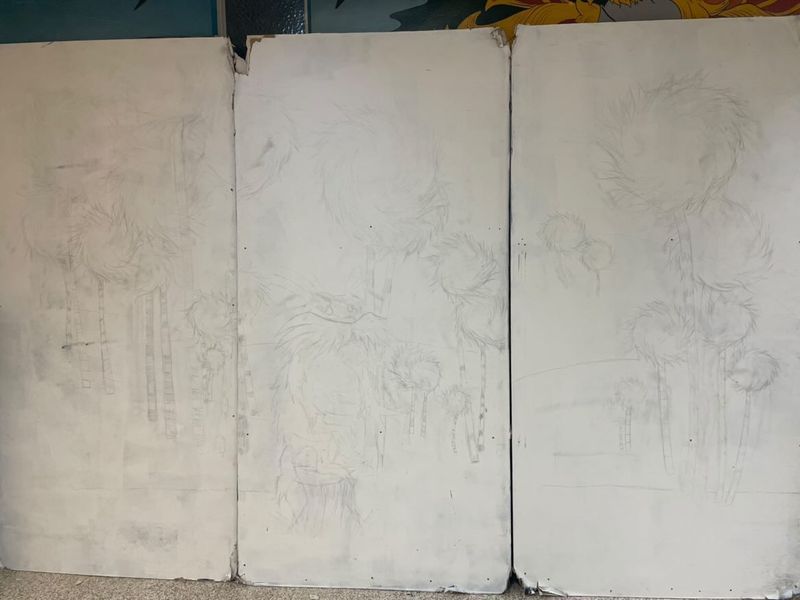 However, she liked to sketch as a hobby and was able to transfer this skill to designing the boards - she “crowdsourced a lot of ideas for paintings, and in the end, relied pretty heavily on the original book”. Another challenge was working with a limited budget. Due to wood rebuying issues that I will discuss later, the art budget ended up being under 200 dollars. Since Jenni did not have much painting experience, there was a lot of trial and error in making do with leftover materials. 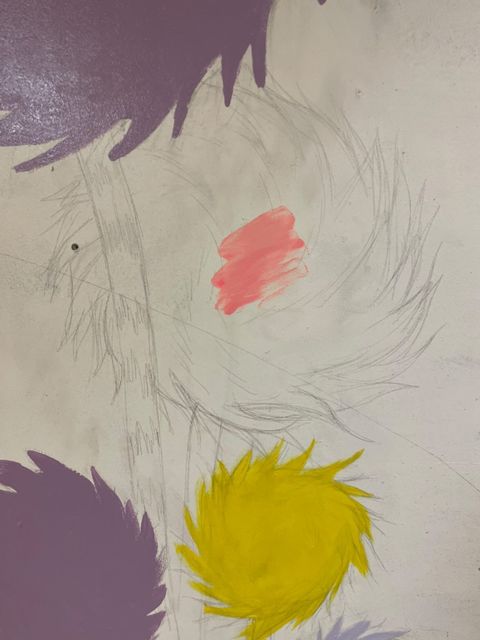 While she was not satisfied with the early stages of art, successive iterations turned the sketches into beautiful, textured drawings with rich detail and vibrant color. 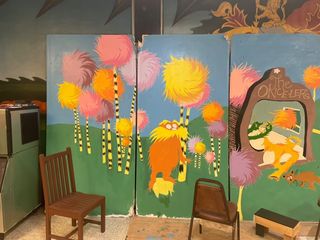 Additional challenges regarding the physical space of interhouse had to be dealt with, especially with additional coronavirus restrictions. For example, there were only supposed to be 100 people in the courtyard at any given time, which meant that the flow of people through the house had to be managed and tracked. Dates and times had to be aligned with administration requirements. Katelyn, our house president (and admissions blog lead!), helped “manage coordinating safety checks with housing, and mainly relayed information from admin/other houses if our courtyard was too messy or if we were being too loud.” While she didn’t do much of the building or any of the art, the final logistics related to housing and the party itself were figured out thanks to her.

As for funding, some was provided by ASCIT (the associated student body of Caltech), while the majority came from the Lloyd House interhouse budget.

In terms of building the actual platforms for the party, Mabel, one of the construction chairs, had more than her fair share of challenges as well. Most houses reuse the wood for building platforms from year to year, but much of our wood was thrown out during the beginning of the pandemic as people were sent home on short notice. A vast majority of wood had to be rebought, accounting for a large chunk of the overall funding. 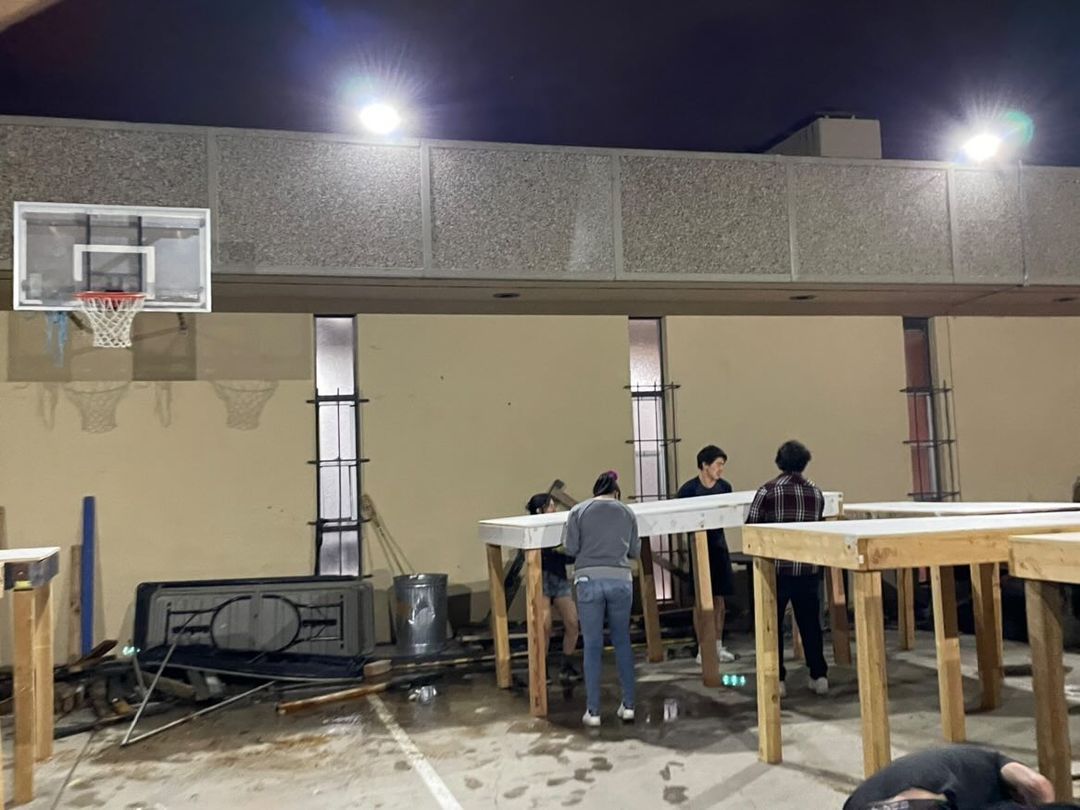 Putting the platforms together was like a 12-piece puzzle. This year’s design consisted of a U-shape that surrounded a dance floor and a special spinning dance device in the middle. Every platform topper consisted of “a thick wood plank screwed into a rectangular frame of 2x4s. Each of these are 4ft by 8ft. There are then 6 legs made of 4x4s, each 4 ft tall(the height limit).” Mabel and her team bolted them all on upside down, flipped them, and then screwed in all the cross braces so that they would be nice and sturdy. Because the courtyard was not level (for rainwater drainage purposes), the platforms had to be “shimmed,” so that the relative lengths of each leg allowed for level platform tops. Any gaps were filled with interior fillers. Then, a team of people built railings and stairs (also per guidelines). When this was done, the artboards were bolted onto the outside railings to create a nice backdrop. The platforms were primed and then painted a Lloydax-grass-green color. After many late nights and a changing group of volunteers, the stage was set. 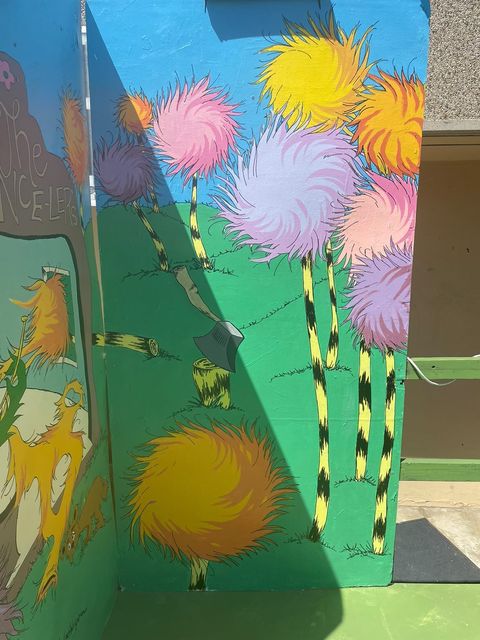 Sulekha, one of the party chairs, found the building to be the most rewarding part of interhouse preparation. As a CS major, she was more familiar with coding than hands-on work. However, after attending construction training and receiving guidance from upperclassmen, she learned how to use new tools like screwdrivers and the wood saw. Luka, a senior who had only experienced interhouse once because of pandemic disruptions, was instrumental in assisting with the building effort in various roles, from cutting wood to screwing on railings. I personally worked with Sulekha and Luka on putting up the railings to assure that no one would fall off the side of the stage while vibing too hard. Sulekha expressed a wish for this year’s interhouse to resemble those that came before the pandemic, in their “full might and glory.” After much hard work adding reinforcements to the stage, sanding rough corners, and making sure no screw could poke unsuspecting partygoers, we passed a safety inspection by the Caltech facilities team with flying colors. 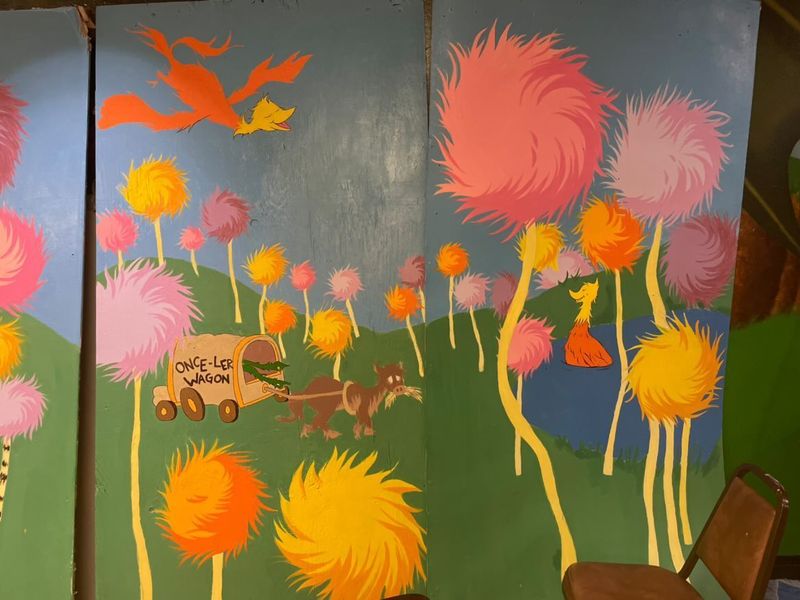 Overall, I consider Lloydax - the preparation and the party- to be one of the most fulfilling moments of my first year at Caltech. I was able to get out of my comfort zone by picking up new skills like constructing the railings for the stage and perfecting the up-down strokes for background colors on the boards. With strong leadership and good participation, we were able to put together a party like no other.