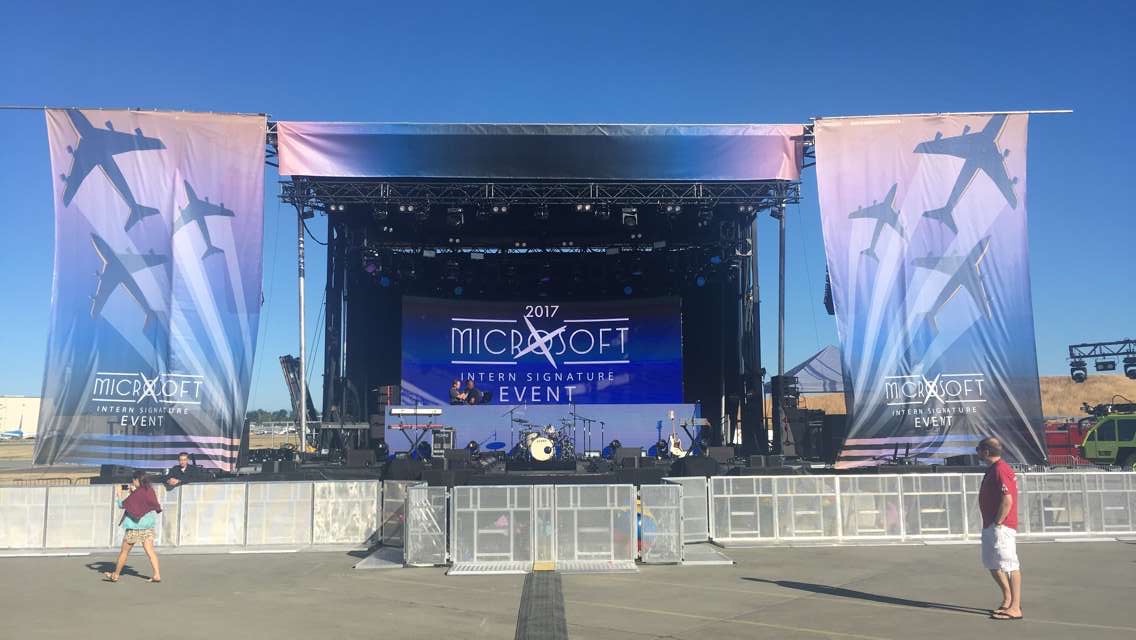 On top of the signature event Microsoft hosts for interns of each business group, there’s an event for all interns together. In the past, the event has been hosted at a secret venue with a secret guest artist, and this year was no different. Speculation started early in the summer, with interns looking at nearly every potential venue and checking to see if the venue was booked for a private event. We did the same thing for artists too. I made a list of the popular artists currently on tour and cross-referenced their tour dates with the day the event was scheduled. Bruno Mars was in the area. So was Skrillex, and Lady Gaga. As a group of about 2,000 investigators, we got close, but we didn’t figure it out. Props to Microsoft for keeping that secret for months.

At around 1 PM, my team and I headed out to Building 26 to wait in line for buses to take us to our secret location. Once we loaded in, a video started on the monitors. We were headed to the Boeing Airfield and Future of Flight museum. After some safety information, we heard a bit about the different activities. There was a graffiti artist making a piece for the lobby of one of the buildings, and we were all recruited to help. There were plenty of noms, and factory tours starting every fifteen minutes. To be honest, I was a little underwhelmed. The event has been heralded as one of the amazing experiences for interns worldwide. A factory tour didn’t seem incredibly lit to me.

When we finally made our way to Mukilteo, it was clear that Microsoft had successfully trolled us. Once we walked in the museum, we saw stations to make flower crowns and cover ourselves in Microsoft temporary tattoos. There were flight simulators and a meet and greet with a NASA astronaut. Once we got to the airfield, there was this huge food festival with mac and cheese, seafood, Mexican street corn, ice cream, cupcakes, cotton candy, barbecue, Indian food, tacos, and essentially every food you could want. And of course, at the center of it all was this massive stage. It was set up for a band, but we could also see a DJ booth behind all of it. At this point, we were all going crazy. After months of anticipation, we were finally going to see this performance. And it certainly didn’t help that the backdrop of the screen was a countdown timer to the concert.

When the clock hit 0, Daya walked out on stage, singing “Sit Still, Look Pretty”. Her performance was flawless, and she amazed all of us with her talent. I certainly became a huge fan of her music after watching her live and if you haven’t heard her before, I definitely recommend looking her up. Her sound is this combination of pop and electronic with a feminist tilt. And after her set, The Chainsmokers jumped on stage. In hindsight, the wristbands we received earlier were the Chainsmokers’ colors, and the font on the signature event t-shirts matched the font on their logo. But I’d ruled them out earlier; they were performing in Vegas that night. It turned out that right after their set in Seattle, they flew straight to Vegas, from the Boeing airfield. Their performance was absolutely electric. They pumped the audience full of energy with pyrotechnics, a laser light show, smoke geysers, and fireworks during the finale. And after all of that, we got in line to receive our intern gifts for the year: an XBOX One Slim Battlefield 1 bundle.

A pretty worthwhile experience. Thanks, Microsoft.