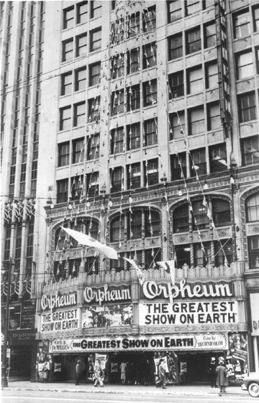 “What’s that? Isn’t milk slightly basic?” It’s okay if you’ve never heard of them. Neutral Milk Hotel is a band from the late 90’s most famous for their album In the Aeroplane Over the Sea, an eccentric indie-folk-rock album inspired by Anne Frank. The songs are composed of a conglomerate of trumpets, acoustic guitars, accordions, and nasally voices. Sounds strange, right? Shortly after its release, the frontman, Jeff Mangum, disappeared from the public eye, ceasing to produce new music or perform.

I have absolutely loved Neutral Milk Hotel ever since I started listening to them a few years ago. Their music is different, but extraordinarily moving. I was super disappointed that it seemed like they would never play live again. So, you can imagine my excitement when I found out Mangum had came out of his hole, and was performing an acoustic solo show in downtown LA!! And even better, my cousin had two tickets to go!!! So I drove downtown on Monday night. Parallel parked like a boss on the street. Met up with my cousin, and walked over to the Orpheum Theatre on Broadway.

The Orpheum is a historic venue built in the 1920s. It’s surrounded by other old (and somewhat dilapidated) theatres and apartment complexes and other tall buildings.

Super cool, right? Well this is what it looked like last night:

AHHHH!!!! This was a dream come true for me.

My cousin and I got in line – it wrapped around the block. As the obscurity and eccentricity of the band tends to attract hipster-y indie people, I have never seen so many black square-rimmed glasses and skinny jeans in my life. Most guys had beards and some sort of artsy hat, and most girls wore flowing flower patterns and some sort of grunge-y boots. So I borrowed my cousin’s glasses in a halfhearted attempt to conform.

Unfortunately, there was no photography inside the building :( So these stock pictures from the website will have to suffice.

Surprisingly, Jeff Mangum seemed super cool and interactive with the audience. I kind of expected, from his whole recluse-for-10-years thing, that he would just sit down, play some songs, and get out really fast. But he talked to the audience casually and even took shouted-out requests for songs. AND, during some songs which had quirky instrumental parts on the album, a few old members of Neutral Milk Hotel came out to play them! So even though it was scheduled to be a solo show, it was like a mini reunion of the band, which blew me away. But what was most awesome to me, was the way Mangum performed so openly. For someone who underwent a nervous breakdown and rarely showed himself in public, to be sitting and interacting with a crowd of like 1,000 people, was so inspiring. He even remarked on the issues he went through, stating “I’m okay now.” He received a standing ovation at the end.

So I had an absolutely great time. Unfortunately, I procrastinated working on a bio set in order to go, so I couldn’t hang around afterward. But such is Tech life :) Do YOU like Neutral Milk Hotel?! Feel free to send your comments and questions :) Love, Lori