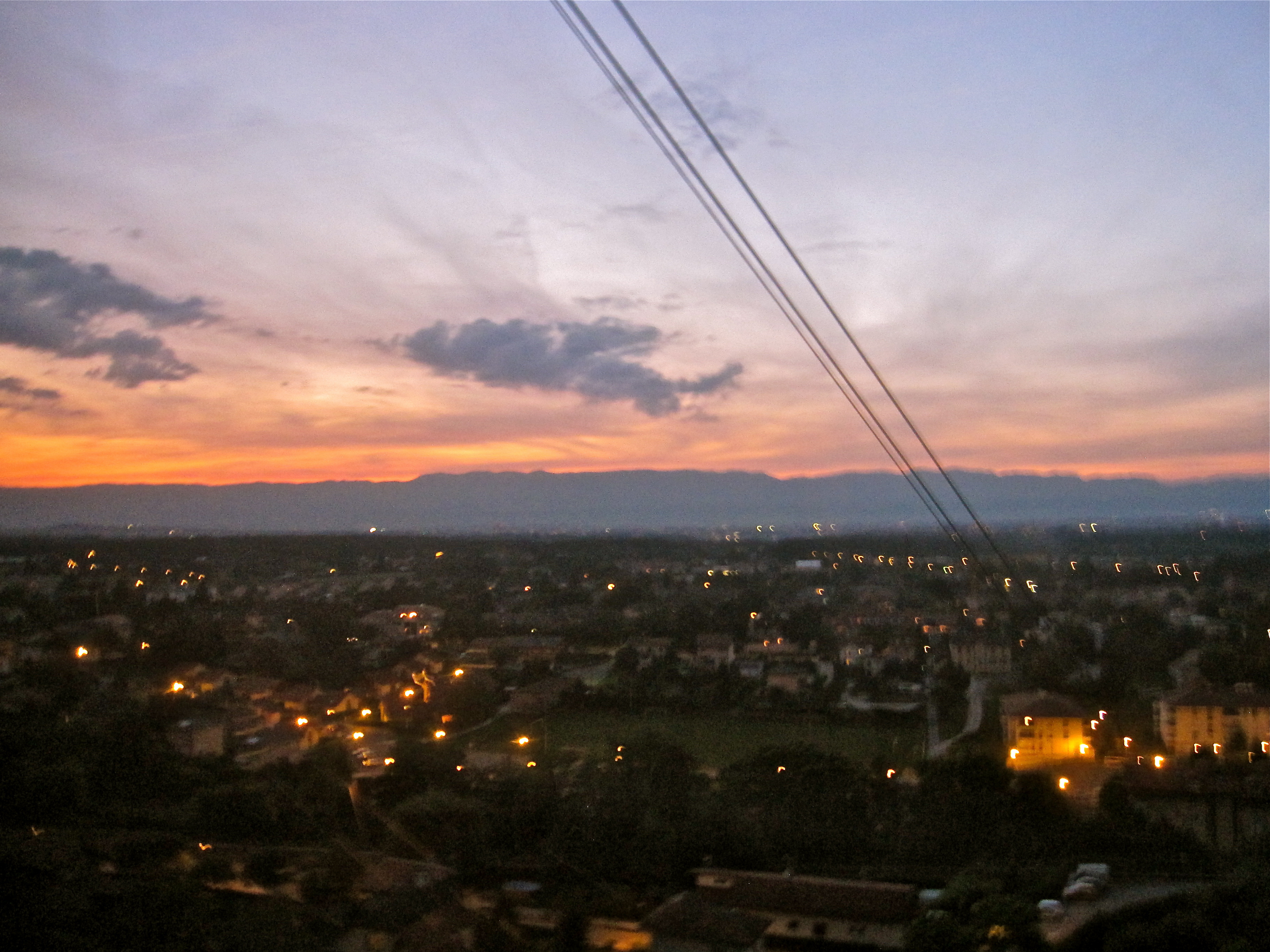 This past Thursday was one spectacularly exciting and eventful day filled with plenty of adventure and heroic feats. It all started when Cedric and I decided to go hiking with two other summer students after work. Seems harmless I know, but little did we know what would come, or really we should have but somehow common sense wasn’t on our side that day. The excitement began at lunch when the four of us got together to discuss our plans for that afternoon. It was at this point that we finally decided to hike up Mount Salève after work, despite having to start our hike at sunset. Perhaps our failure to foresee what was coming was due to the fact that we were distracted by a huge fire outside of the restaurant. By huge fire, I mean a small constant stream of smoke billowing out of a trash can after someone failed to extinguish their cigarette before throwing it out. The fire was fairly well contained but as good citizens we decided to save CERN from this conflagration by shuttling water in our water bottles into the trash can. It took around eight liters of water to put out the smoke since the trash can had basically been filled with a bunch of old cigarettes. So yes, this is how we saved CERN from the terrible cigarette fire of 2013, also why my water bottle now smells like cigarette smoke.

Anyways, we met up around 7 pm to start the hike up the mountain which was estimated to take around 2.5 hours. It was already sunset and by the time we made it to the base of the mountain it was 8:30 pm. Our plan was to take the last cable car back down at 11 pm. We bought a one-way ticket before we went up since they only sell them at the bottom. The man at the ticket counter didn’t seem to have any faith in us for making it up before 11 pm, which turned out to be completely warranted. Turns out it took us half an hour before we could even find the right trail to start on the mountain. We decided that it would be smarter to take the cable car up and then walk down the mountain, since going downhill is obviously better than uphill. On the plus side, the view from the cable car was incredibly beautiful. Unfortunately my camera is a bit out-dated so my pictures are rather blurry but you can still see how amazing the sunset was.

Up on top the view was even better as you could see all of Geneva. It was also really cool since you can just see the Globe of Science and Innovation at CERN at the base of the Juras. By the time we had spent just a few minutes at the top the sun had pretty much gone all the way down. We started looking for the trail down but it turns out that we are even worse at finding out how to get off mountains than how to get on them. We finally found “a” trail which may or may not have lead us down the right side of the mountain. Seeing that we are super legitimate hikers and didn’t bring flashlights we decided it was probably best not to risk dying on the side of the mountain. After debating hitchhiking or hot-wiring a car, we decided to beg the cable car people to take us down. Somehow they had expected this and weren’t suprised at all. The guys at the station were actually really nice and didn’t charge us the full price for two one-way tickets.

Overall, we failed at hiking but we did get an excellent view of the entire city and the stars from the mountain. Also, Cedric and I had a great time learning colorful new Spanish and Scottish expressions from our friends.