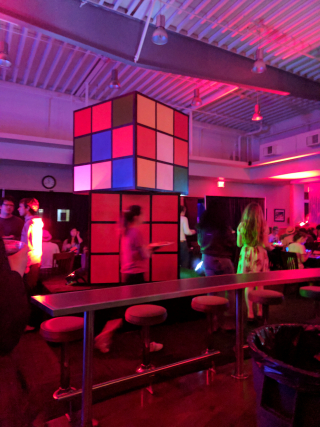 Each of Caltech’s eight houses hosts an interhouse party each year, but some would say that none of them compare to “Chandler Interhouse”. “Chandler Interhouse” is a nickname for Midnight Madness, where Caltech Dining Services (CDS) opens up Chandler Cafe around midnight for a few hours of breakfast foods during finals week. In recent years, the staff have gotten into coming up with different themes for this quarterly event. The decorations for Midnight Madness rival that of the interhouse parties: there was often loud music, large paintings, hanging papier mache decorations, and dimmed lights.

This term’s theme was the 80s. Neon designs greeted students as they walked past the cloth partitions into a darkened cafeteria lit with strobe lights. One of the most ostentatious things were the meter-wide Rubiks cubes that were lit up from the inside. Free plastic glasses with flashing LEDs adorned the tables. A live band, decked out in glitter jackets and electric guitars, attracted a large crowd of students within minutes.

However, the main attraction was the food – tons and tons of food. There’s a self-serve breakfast food section with French toast, bacon, eggs, sausages and more. We also had a congee station, crepes that are made on the spot, and freshly fried mini donuts. There was a stand handing out free protein shakes.