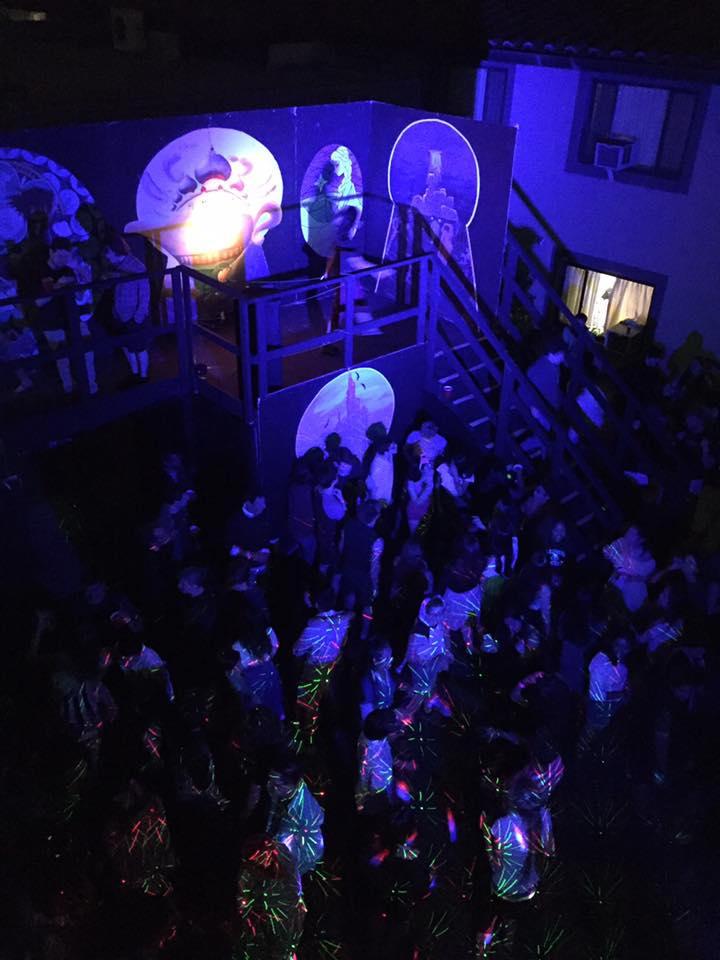 As promised, here are some pictures of Venerable OPI 2017.

On the actual night of the party, the disco lights were on and the dancing was in full swing:

A more holistic view of the dance floor at night:

I went around the daytime and took individual pictures of the murals when the lighting was much better and the art could be appreciated to full value.

The Nightmare Before Christmas:

And some holistic daylight shots of the dance floor:

Sadly, I do not have any pictures of the decorations in our dining hall or the magnificent food put together by party leader Lily and her team.

We have to deconstruct the OPI dance platform and put all the wood away in our shed until next year, but we do have one relic that we get to keep hanging up for the rest of the year. The mural in the dining hall remains there until it is replaced by a new mural for next OPI. This year, as the senior who has contributed most to OPI art in the past, it had been my privilege to paint the dining hall mural.

This is my initial sketch, based on a digital painting I found online that I really liked, of the penultimate world in the Kingdom Hearts game called The Hollow Bastion:

I began transferring the design to the larger-scale wallboard and painting some of the pipes in the left side of the board, practicing my blending skills:

After the pipes were done, more sketching:

The Friday before the party, I painted from 10 p.m. straight until 8 a.m. with breaks only to use the restroom or get a drink of water. My friend Rupesh had gone to bed around midnight and woke up at 6 a.m., wandering into the dining hall to find me still up and covered in war paint. When I couldn’t take it anymore I went to bed for a few hours, woke up at 3 p.m., went to dinner with some friends, and resumed painting until 9:30 p.m. The party began at 10, so it was just in time! And the finished product, which of course never turns out exactly as one envisions, but was in my opinion pretty decent all the same:

For a week after OPI before we have to start deconstructing, our House moves dinner outside onto the dance floor so we can enjoy the art and construction as we eat. Here’s a picture of our President (in the red) conducting dinner announcements from the third floor to the screaming cheers of the crowd below:

My last OPI as a Caltech student is finally over. I’ll never slave away at painting or building ever again to this degree. Next year, I’ll come back and enjoy the hard work of my Venerable underclassmen, as the alumni did before me.