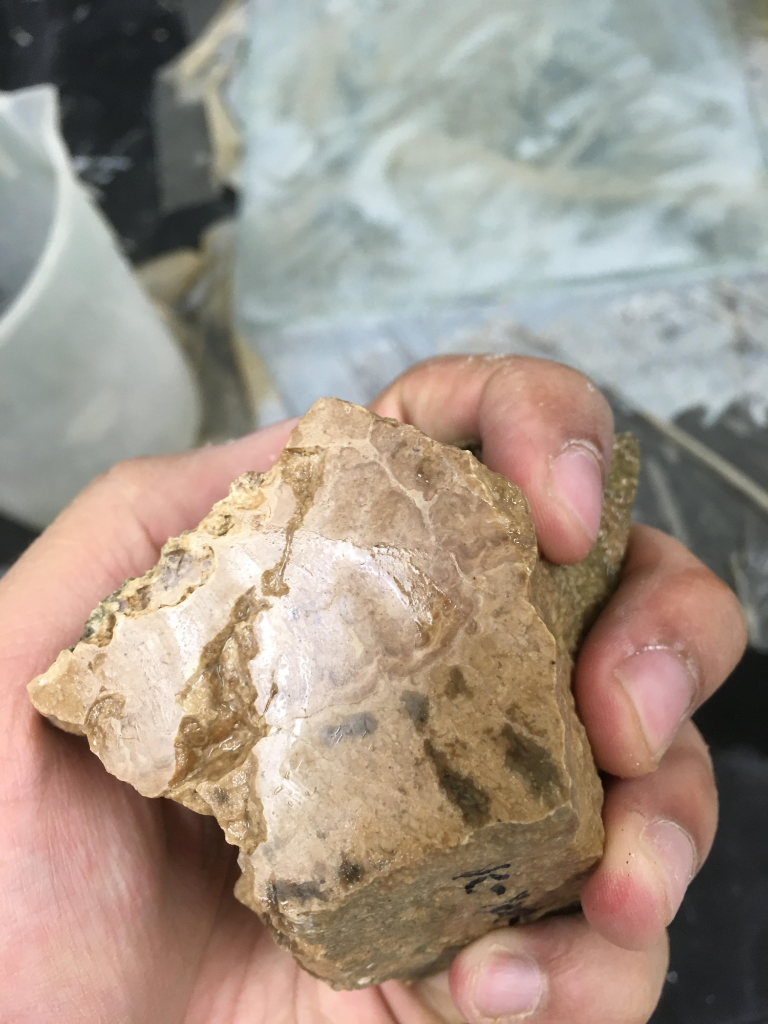 Time for week two of the SURF updates!

So, what have I been up to? The answer is pretty much everything. My postdoc mentor (Miquela) was out of town for the first two days of this week so I got to venture into the strange and mysterious world of sedimentology.

On a field trip, a professor at CU (Caltech alum Lizzie Trower) collected a bunch of samples of microbialites and other rocks from the green river formation, which is a rock formation that runs through Wyoming, Colorado, and Utah. The green river formation is famous for its marine fossils (back in my youth I mined Knightia fossils in Kemmerer, WY), but also apparently has a section with some giant microbialites/stromatolites. My job was to cut the samples into billets which would be shipped off for thin sectioning, in addition to slabbing and polishing the rocks.

I did this on a pretty dated but effective rock saw. Basically, it works like a normal saw except it is a lot more friction based so it’s actually too blunt to cut the fleshy parts of your fingers. It had some issues with silicified minerals and would bind, but beyond that worked like a dream and was pretty fun to use also. Polishing the rocks was different, basically after slabbing them you’d sand it on a glass plate with water and sand you pour onto the plate. Kinda funky but was relaxing and I had time to listen to the chineasy podcast. Fun fact, 我记得 means I remember in Chinese, which is ironic because it’s one of the only phrases that I remember from those podcasts.

(A nice slabbed and polished rock, note the silicified portions in the lower region. The rock saw didn’t like that.)

The rest of the week I continued prepping some samples for the gasbench spectrometer by flushing them out with helium, ran the gasbench samples, and spent some time working on R code, matlab code, and a coding project to weed out outliers from the 253-spectrometer data – more on that to come next week.

Hence how we arrive title of the post. I decided to eat lunch with a friend on campus during one of the days, and that’s the main feeling I’ve had working at CU boulder is that I don’t quite belong in some way. Especially when I’m sitting at lunch with my Caltech lanyard, admissions water bottle, and Caltech sunglasses (two of which I could’ve avoided but eh). I definitely feel welcome in my lab but overall, I’ve just sort of felt like I’m a daily visitor on campus, which I guess I am. I suppose that’s the peril of doing a SURF at a different school.

I’ll leave you with that. Until next time,