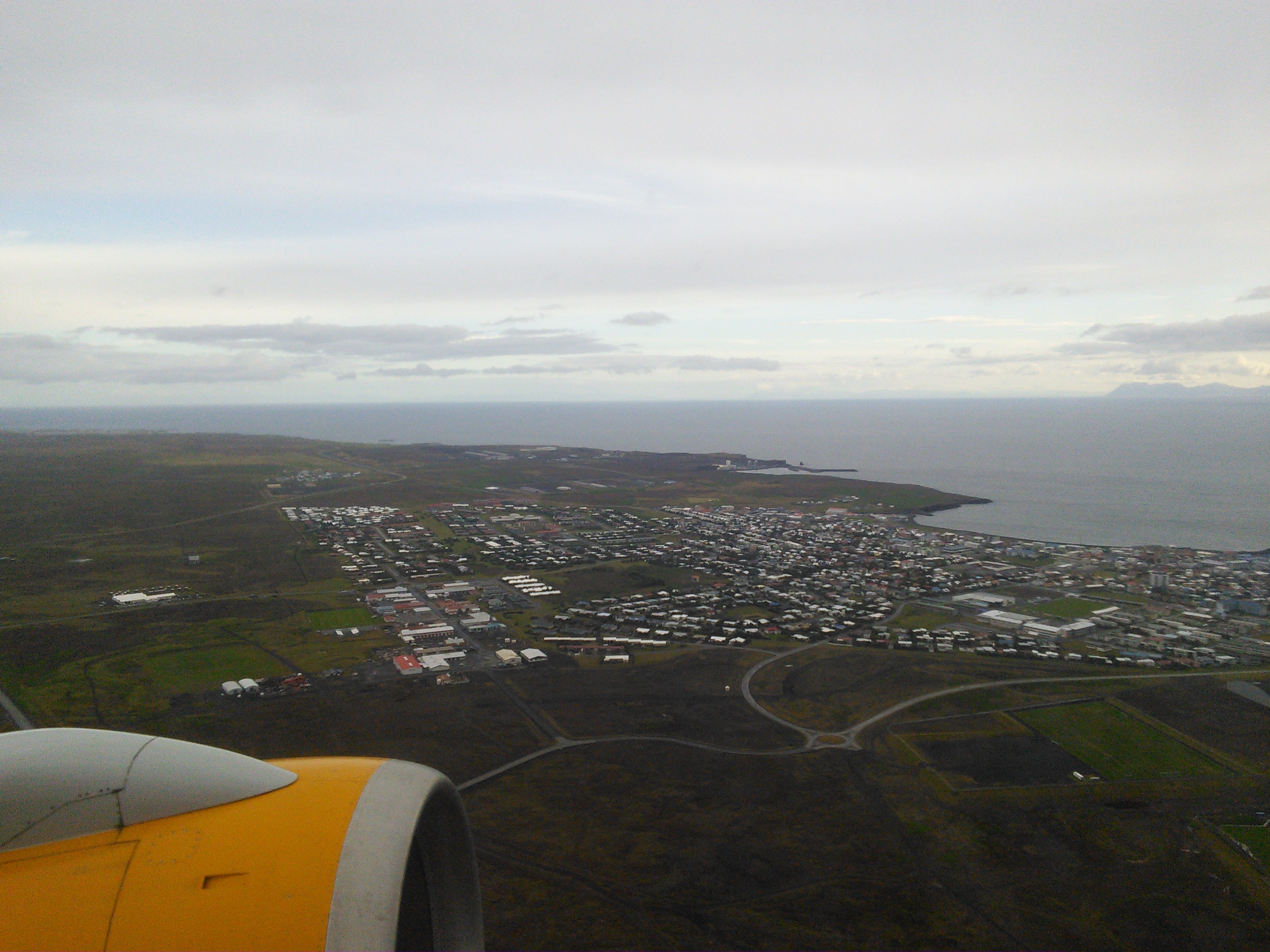 Yay, first post! I wrote this post when I first got to Denmark, so it’s awkwardly in present tense when it happened over two months ago; however, as I am very lazy, I do not feel like editing it, so I’m posting this in early August rather than mid-October.

My first week in Denmark has been a blur. After spending 7 weeks in friendly (and familiar) Canada for my summer research, I was whisked off to just-as-friendly (but not-so-familiar) Denmark.

Getting here was an adventure in itself: I left my house in Canada on August 2nd at 12:30 local time and didn’t arrive to my hotel room in Grenå, Denmark until 22:30 local time the next day – that’s 25 hours of traveling!

Flying over Iceland! After getting dropped off at the airport in Winnipeg, I flew seemingly backwards to Edmonton, had a two hour layover, then hopped on a plane to Iceland. I landed at Keflavik International Airport in Iceland at 7:35am, thus beginning my 5 month stay in Europe. Unfortunately, I was in Iceland for less than an hour before getting on the next plane, so I didn’t get to see anything besides plenty of Duty Free signs and the lava flows surrounding the airport. I barely had time to clear customs and get on my next plane, let alone leave the airport. Finally, I landed in København [Copenhagen] at 12:35.

København Hovedsbanegård [Central Station] And if only that was the only traveling I did that day. My first three weeks in Denmark will not be in København or Lyngby where I’ll be studying at DTU, but in a small coastal town called Grenå on the east coast of Jylland [Jutland]. Here I’ll be learning at snakke dansk [to speak Danish], learning a bit about Danish culture and history, and becoming friends with other exchange students who will also be studying at DTU.

To get to Grenå from København, we had the option to take a either a couple buses and a ferry to get here, or a couple trains and a couple buses. My plane landed too late to catch the ferry, so I had no choice but to take the train. Buying the ticket was easy; however, figuring out what train to get on was a good deal harder. I bought my ticket only 8 minutes before the train left, and initially went to the wrong spor [train track], so I had to run with my 30 kilos [66 lbs] of luggage back up the hill to the next track. I got to the correct train on time, and loaded myself on, only to find out that particular train would not be running that day. So I had to get off and wait another 2 hours for the next train! The first train ride was relatively uneventful. However, I had to switch trains in Århus (Denmark’s second-largest city) to get to Grenå; and after asking, found out I needed to take a bus from right outside the station to another train station to catch the right train. After asking the nice-looking person also sitting at the stop, I learned that he, too, was from the US and was going to Grenå for the language course, and that was how I made my first friend in Denmark.

We successfully made it onto the bus and asked the bus driver to let us know which stop to get off for the train. On the bus, we found another girl also from the US going to the language course. Yay, a second friend!

The train station in Århus.

We made it to the train station and boarded the train to Grenå. We were exhausted (it was 21:45 at this point), so we all fell asleep for the train ride. At around 23:00 we were awoken by the horn signaling the end of the line, and were deposited in Grenå. Unfortunately, it was so late that the bus that was supposed to take us to the hotel had stopped running. It was too far to walk with all our stuff, and we had no idea where the hotel was, so we had to walk about half a kilometer to a gas station and call a taxi. We arrived at the hotel at 22:30 and I was asleep in my bed by midnight.

The next day started bright and early. Breakfast was at 7:30 and class started at 8:30. From 8:30 to noon every weekday, we learn and practice Danish, with a half hour break at 10:00. Then we have an hour for lunch (my second favorite time of day), and after lunch is a few hours of activities or presentations about Danish history and culture; for example, we learned about the economy, Danish nationalism, and music; and went on a tour and scavenger hunt in Grenå. Then we have the afternoon off until dinnertime (my favorite time of day) at 18:00. Finally, we have an activity after dinner to help us get to know the other students in the class; so far, we’ve had a sports day where we competed in teams for a prize, learned how to salsa, and hiked through the nearby forest. And at some point in the day we need to find time to do our homework and study the Danish we’ve learned in class. Needless to say, I’m kept busy.

Look! I’m being social and making friends and generally doing things! There are international students in the class from all over Europe, as well as a few from outside Europe (such as my fellow Americans, a couple girls from Nepal and Japan, and an Australian). Fortunately for me, they all speak English very well, as the course is taught in English; and they’re all much better than me at Danish. Knowing both their native language and English helps them a lot, so I have to do a lot of work to keep up. Luckily in class I sit next to a Dutch guy who knows what he’s doing (Dutch is very similar to Danish), so I bug him with all my questions during class.

As for the Danish itself, the grammar and vocabulary is not too bad, although it’s a lot at once; but the pronunciation is difficult. They have sounds and letters that we do not have in English and that I honestly cannot distinguish, such as ø, å (both make an o sound), and æ (which is halfway between a and e – no surprise there). Their j is pronounced like a y, and sometimes their d is said like an L. For example, “Jeg hedder Valerie” [My name is Valerie] is roughly said like “Yeh heller Valerie”, which confused me to no end on the first day. All in all, though, I like it a lot, and I’m learning quickly.

However, it is now Friday night, and my newfound friends are waiting for me to go with them to enjoy the great weather, beautiful beach, and cold beer that await us just outside the hotel, so that will be all for now.

Enjoying the beautiful beach just outside my window.