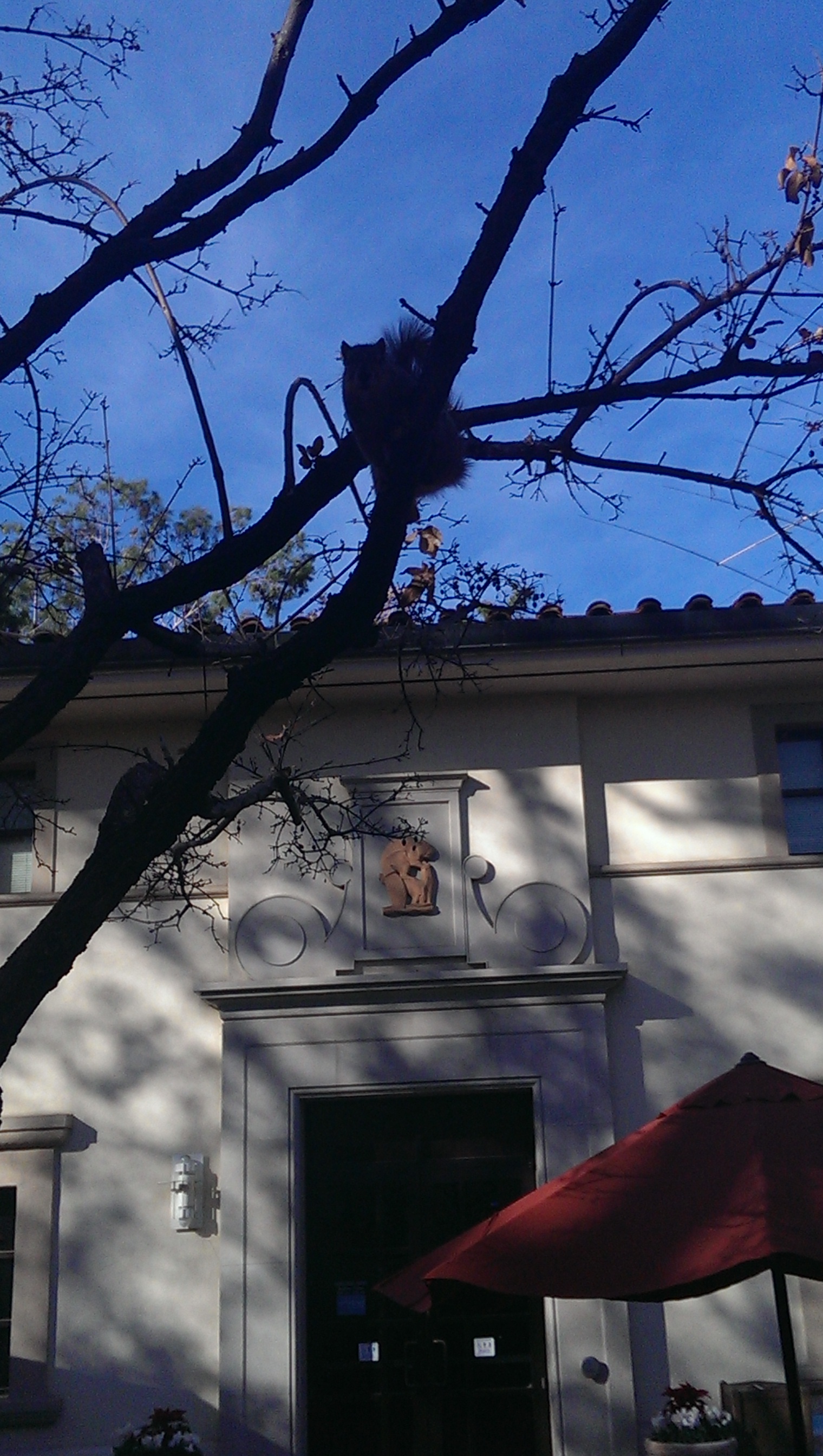 You hear a lot about the people around campus - professors, grad students, postdocs,administrators, staff, and, of course, the notorious undergrads.However, on your average day strolling around Caltech, it isn't the people who jumpout at you so much as it is the squirrels. Because, on occasion, they literally dojump out at you from the bushes.Yes, we have a lively bunch of frisky and surprisingly unafraid squirrels at Caltech,and they deserve some mention as an integral and adorable aspect of our community.

I think people really do take the squirrels to be part of the community. For example, every day, someone leavesa plastic Tupperware container with seeds in a corner near the stairs leading to the Dabney Hall of Humanities, and the container slowly empties over the course of the dayas the squirrels take their fill. There's also a guy (a professor, I think, althoughI've never had the chance to talk with him and find out) who sits by the aeronauticsbuilding in the evenings and chatters at the squirrels playing in the lawn, offering them nutsand seeds. And heartless indeed is the undergrad who, while walking to class, fails to watch thesquirrels darting through the branches overhead.The squirrels basically live throughout all of campus, although as one might expect, they tend tocrop up near Chandler, Broad Cafe, and other food areas to maximize their returns frominteracting with people, waiting in the trees for the opportune moment: I encountered a lot of squirrels this summer, since my walk to lab every morning led me through thewestern half of San Pasqual Walk, an area that squirrels enjoy because it's surroundedby a lot of tall trees and a lot of lab meetings with leftover food. Like these two guys I found lounging in the trees one lazy afternoon:

One of their favorite hideouts is Dabney Gardens (adjacent to Dabney Hall, a small,classy chapel turned performance hall where we host chamber recitals and a cappellaconcerts). The courtyard outside the hall is full of shade and leafy trees and borderedby thick brush, and sometimes you can see the squirrels running along the walls and frolicking in the undergrowth: As a scientist, I have conducted a rough study on squirrel behavior on campus. Myresults indicated that when one tries to take a picture of one, about half the timethey will bolt away before you can even snap a frame. The other 50% of the time, thesquirrel decides that its best strategy is to advance *towards* you at an intimidatinglyfast pace. At which point, as an investigator, your best bet is to turn tail (so tospeak) and run fast, optionally choosing to let out as high-pitched scream as thesquirrel gives chase. Suffice it to say, in terms of its native animal life, Caltech's an active place.And this is just the squirrels. I haven't even begun to start talking about the turtles (here pictured doing an advanced form of yoga). Or the cat I babysat for a few weeks last year (if you're ever worried about having a weird roommate when you get to college, let me tell you...at least you won't wake up at 6 AM to him snuggled on your pillow, paws on your face and meowing incessantly): Or the two rats that my alley has adopted, who in typical Alley 4 style, we decided to name Korra and Asami. But, since we've only had them for a few weeks, we haven't had anything crazy yet (except for the time that Korra escaped and was running around the room for 10 minutes until we managed to corner and catch her. Eh, but that's just details :) Anyways, maybe time to get back to finals.See ya on the flip! Vasant