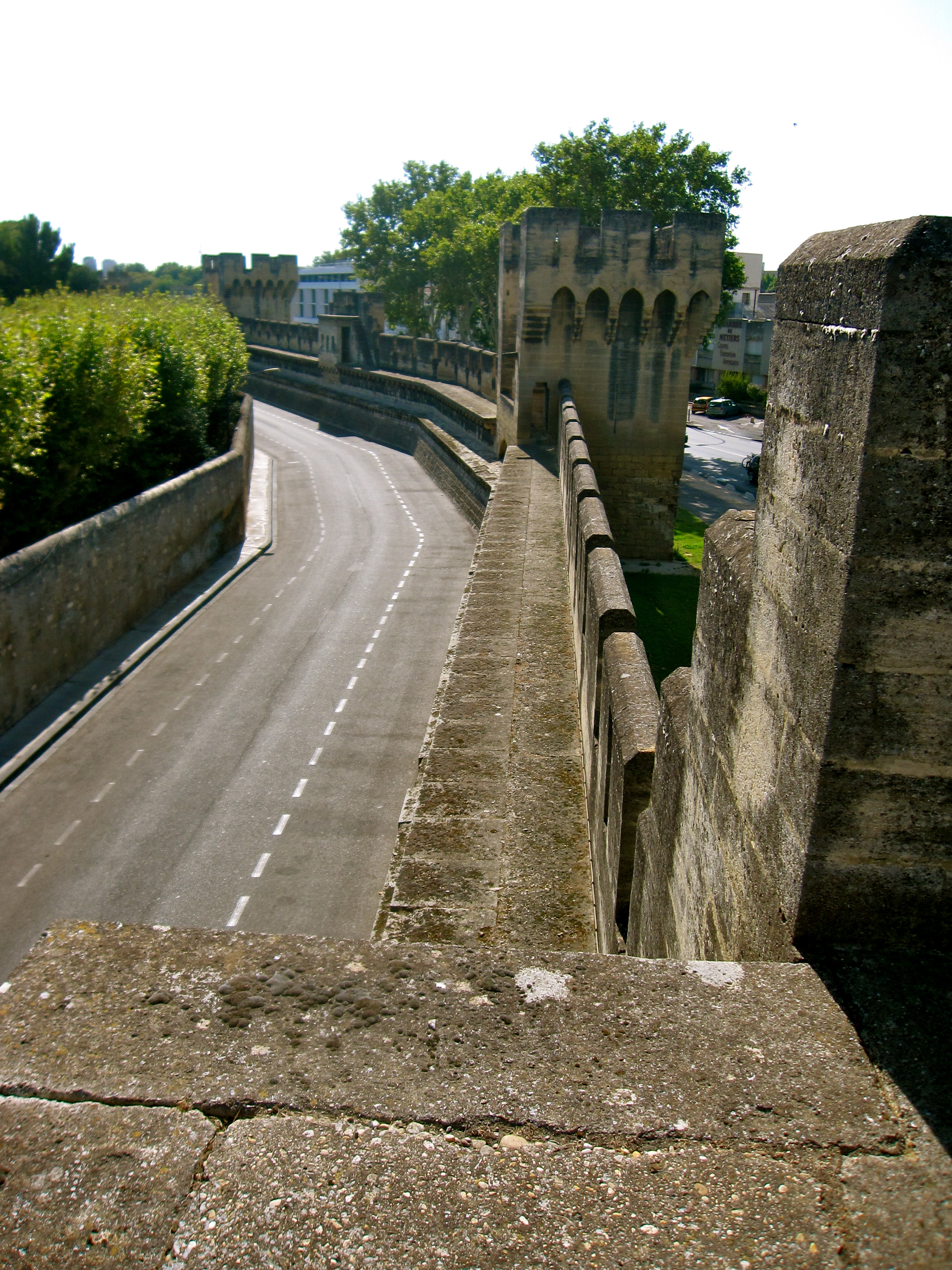 So I don’t know about everybody else but I definitely danced there … This weekend Lisa and I went to Avignon, to old Papal city in the south of France. During the Catholic Schism it was home to Popes and AntiPopes. To us, it was just cool to see some well preserved medieval structures.

The entire city is still surrounded by a completely intact fortified wall. We found a broken part that was easy to climb up on and thought it would be great to walk around the city towards the center entrance on top. That is until we found out that there are gaps in the wall for buses to leave through, so we decided to walk all the way back rather than jump across buses. Still, we made many Asian tourists very jealous … Mission Accomplished!

The town itself was very quaint. There were many little markets and so many lavender stalls. Lavender soap, sachets, candles, etc. I bought lavender cookies. The markets were just full of colorful things.

As we made our way to the center where the Papal palace was it became incredibly touristy and kind of crowded. It seemed like Disneyland, to the extent that there were some sketchy people dressed in Pooh and Mickey costumes outside the palace.

It was actually kind of cool timing coming to Avignon this weekend because I just got to a part in my book, le septieme templier, where the head of the templars heads to Avignon to try to save the templars. Anyways, yeah, the palace was pretty cool. It was fun getting to go up to the top of the towers and look out over Provence.

There was obviously a lot of Catholic history in Avignon but I think most of what was advertised was more of the Crusade and Templar side, with a huge emphasis and knighthood. It was pretty cool, I’ve always been a fan of medieval history. I’ve always travelled to different castles in northern France and I was the geeky kindergarder who didn’t know who Arthur the anteater was but thought that my teacher was talking about King Arthur. Lisa and I were kind of tempted to buy some of the swords and crossbows from the gift shop and put on a show. We figured that we’d make the money back from pan handling.

The last big event of the day was seeing the bridge. For those of you who don’t know about it, there is a popular song about the bridge and dancing on it (click on the link for the … above). Basically the story behind the bridge was that a shepherd claimed that God spoke to him and told him to build this bridge so he went on a pilgramage and collected enough alms to build the bridge. It’s also famous because it has been falling apart, though scientists actually don’t know why since a bridge nearby from a similar era still stands. Yet, you can pay a few Euros and go stand on it, which I did ! :D It is a nice bridge, there is even an altar in it, or at least what is left of it.

I think the nicest thing we found about Avignon was that it wasn’t that expensive. We stayed at a hostel that was our cheapest housing yet and managed to get dinner for less than 10 euros. Soooo, we compensated by having tons of ice cream. :) I think we may have had 5 scoops over the entire day, but who counts. I justified it with the experience of eating Smurfs ice cream.

There actually isn’t too much to do in Avignon for long term so the second day we took a train to the nearby ex-Roman city of Nîmes. I was incredibly excited because one of the few things I love more than medieval French history is Roman and Egyptian history. Nîmes has its own coliseum and many other Roman monuments.

I really wanted to stay for a bull fight but unfortunately there weren’t any that sunday. We wandered throught the town and headed to the fountain region.

There are a bunch of canals that were created by the Romans coming from a foundtain in a public bathing area. Everything is still intact which is pretty awesome. We basically just spent the afternoon climbing the hill to get to the tower on top and walking under the artificial waterfalls that were put there by the Romans.

At the top of the hill there was an old tower that gave a view of the entire region, it was pretty fantastic. The hike up was pretty intense but well worth it.

Download MVI_0763 The only thing that remained of the tower itself was part of the shell since apparently this guy interpreted this prophecy that there were riches hidden beneath Nîmes to mean under the tower and he convinced the king to let him tear it apart in return for any treasure. Basically I learned this weekend that all you need is a diving prophecy to make it in life.

So overall, the weekend was pretty awesome. And we all made it back alive which was awesome. One of my roommates lost one of the keys the day before we left and we were all going off to different places so we were wondering how everything would end since we only had one key and had no clue when each other would be getting back. But it all worked out so hurray! Now I am starting my 9th week here at CERN. I’m freaking out since I only have two weeks left. But I am wrapping everything up, produce my results, writing a Twiki for instructions on how others can redo my project and beginning my final paper. Plus we have fireworks that we’re setting off this week! So it looks like everything should turn out well this week, hopefully.