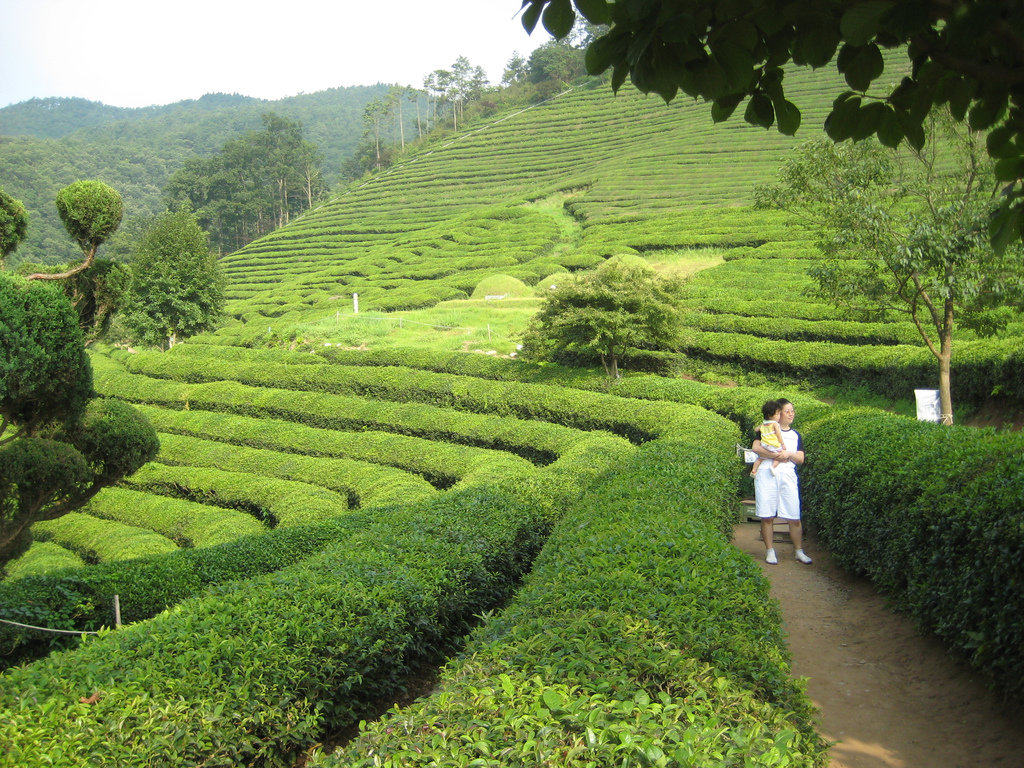 This last weekend was really cool. The dean of GIST, the GIST-Caltech coordinator here, and the president of student affairs drove us four techers and a couple of GIST undergraduates out on a trip. However, when we were first climbing into the van, we saw a gigantic centipede crawling on the ceiling. It was four inches long with a maroon body, red head, and bright orange legs. I had no idea bugs could even be that big! Once that was out of the way, we drove off to the Boseong tea farm. Boseong is a famous area for growing tea. There was a typhoon on its way in from over the sea, so it was very cloudy and rainy. The tea farms in this area cover hills with rows and rows of hedges of tea plants. We hiked up a couple of these hills, but it was so foggy we couldn’t see more than 30 feet in front of our faces. Below is a picture of what the hills look like in the sunlight, compared with the foggy views we had.

Next we drove to a small restaurant for lunch. It had only three tables and was located in the home of the couple who owned it. The wife is considered a living national treasure for the special wine that she makes. They served us so many dishes. A lot of Korean meals seem to be composed of side dishes, so we Caltech students assumed this variety of foods was the meal and ate our fill. However, as it turns out, this was just the appetizer! The next course consisted of rice and soup with at least 16 different garnishes to choose from.

A lot of this food was good, but a lot of it was also really weird. One of the garnishes was whole little crabs, shells and all. Another was tiny salty dried sardines, no more than a centimeter in length.

There were definitely dishes that I loved, but I have to tell you about the most disgusting this I have ever eaten. I have decided to call it anti-food. If it ever touches food, the resulting implosion would destroy the world as we know it.

The dish, called hongeo, was served as one of the appetizers. The idea was to take a slice of pork, a piece of kimchi, and a slice of fermented skate and eat it like a sandwich. Oh my gosh. Let me tell you about skate. First of all, one of the GIST students, a native Korean, refused to eat this dish. However, Marino tried it and said that he liked it, so I gave it a shot. It smelled like ammonia, and after I put it in my mouth the smell was even stronger. I started to chew, and the texture was crunchy and chewy at the same time. Every bite made the smell and taste of ammonia stronger, and it was difficult to chew off a small enough piece to swallow, so this horrible experience was just sitting in my mouth. I was able to swallow about half, but when I tried to swallow the rest, my gag reflex kicked in and I coughed it back up into my mouth. Then everyone was staring at me, and asking if I was all right, while I was desperately trying not to throw up at the table. I managed to choke down most of what was left, and subtly dispose of the rest in a napkin.

It turns out that skate are a type of cartilage fish, similar to a sting ray. They don’t pee; instead the uric acid circulates in the blood stream and seeps out through the skin. When uric acid ferments, it turns into ammonia. Some people actual enjoy the taste of fermented fish pee. I am not one of them.

After surviving skate, we went to another tea farm where we learned how to make green tea ourselves, using the traditional method. First you take the fresh-picked leaves and cook them in what was basically a huge wok for four minutes, flipping the whole pile every three seconds. Did I mention the wok-thing is heated to 300 C? We had heat protection, but it was barely enough. Then we took the leaves off the heat, formed the leaves into balls and rolled them around to break the outer coating. Then we heated the leaves for another four minutes, this time at 100 C, but still continuously stirring. A really delicious tea smell was released. We only repeated this process twice, but to make good tea it should be repeated 10 times! The master tea maker completes the first round, but apprentices finish the tea.

The tea maker then served us some green tea, which I appreciated a thousand times more now that I knew how much effort goes into making it, and more food, though we were also super full from lunch.

This structure was standing outside. The sign translates to “achieve the sound.” Apparently these singers will stand near waterfalls (to drown out the noise) and sing and shout until their vocal cords are raw, striving to reach the perfect sound.

Finally, we returned to Gwanju for dinner. The restaurant was really wonderful. So much food! There was even a special shelf under the table were the waiters put the food that they couldn’t fit on the table! The first course was a cross between spring rolls and hot pot. We cooked meat and veggies in the hot pot broth and then we wrapped them in rice paper with various sauces.

After we finished cooking the spring roll ingredients, we pulled bowls of noodles out from the special shelf and cooked them in the broth left in the hot pot.

For the third course, we mixed a couple of bowls of rice with some squash and other toppings in what was left of the broth.

You have to eat this meal quickly, or else too much broth will evaporate before you finish. One of the waitresses actually finished cooking one of the pots for us because we were too slow!

This is an after the fact picture because I was too hungry to take one beforehand.

Tomorrow I’m planning to hike Mudeongsun Mountain, near Gwanju. I’ll tell you how it went next time!